Rep. Alexandria Ocasio-Cortez tells TRNN that grassroots movements are "winning, beating the billionaires," and paving the way for a Green New Deal.

Rep. Alexandria Ocasio-Cortez tells TRNN that grassroots movements are "winning, beating the billionaires," and paving the way for a Green New Deal. 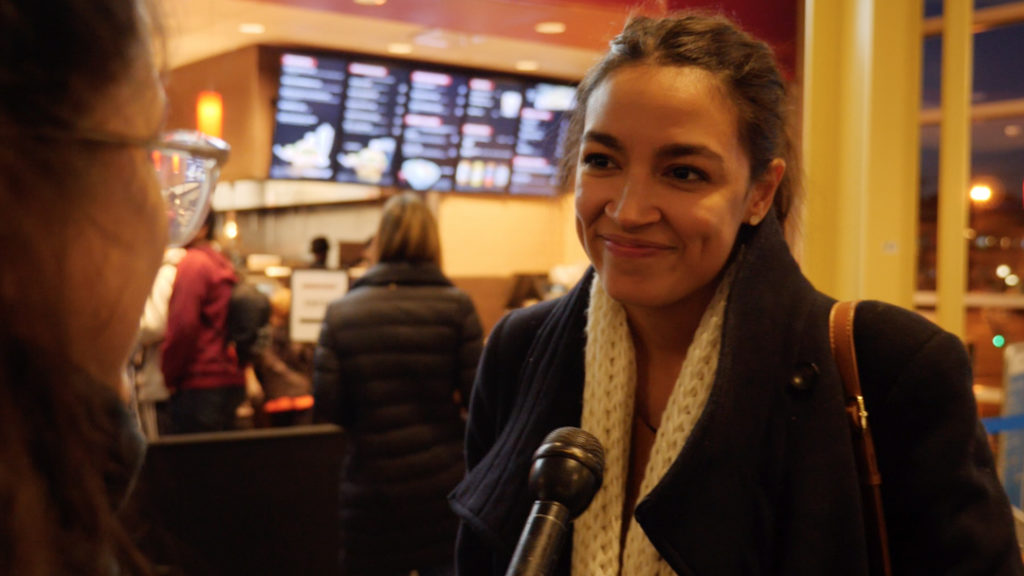 And look who I ran into on the plane on the way back: Representative Alexandria Ocasio-Cortez of New York, of course. Thanks so much for doing this.

ALEXANDRIA OCASIO-CORTEZ: Yeah, of course. Thank you for reaching out.

DHARNA NOOR: I wanted to start by asking you about the fact that former New York City mayor Michael Bloomberg might be throwing his hat in the race this presidential cycle. Vox just found that Jeff Bezos apparently was encouraging him to run. What’s your response to this, as somebody who’s a New York City native, and someone who’s been really critical of Amazon?

ALEXANDRIA OCASIO-CORTEZ: Yeah. Well, I think right now billionaires are seeing that the tide is turning in the United States, and that we’re going to have to make real structural changes to our country and to our policy. And that may result in things like a wealth tax. It may result in other sorts of changes so that we can start returning to our roots of guaranteeing certain economic rights in the United States, like healthcare, education and more.

I don’t know what’s always behind their motivations, but I don’t think it’s necessarily what we need right now. But he’s choosing to ignore four out of the five early states. I think that really shows exactly the kind of level of commitment there is there to everyday people in states like South Carolina, Iowa, New Hampshire, and so on.

DHARNA NOOR: Yeah. But speaking of Bezos, obviously, Amazon just poured tons and tons of money into some down-ballot races in Seattle and failed. Some progressive candidates prevailed there despite that. There were other progressive candidates winning in other places from Charlottesville to San Francisco. Does all of that success this past election cycle give you hope for 2020?

ALEXANDRIA OCASIO-CORTEZ: Absolutely. I think what we’re starting to see everywhere from Seattle down even to California with our new DA race that just happened, is that there is a very strong grassroots movement that’s developing in the United States all the way from local seats, all the way up to the federal, and into the presidential primaries.

We were just swinging through the state of Iowa, and we’re talking about… this is not just about a presidential election, this is about a grassroots movement in the United States. And I think we’re winning, we’re beating the billionaires, and we’re protecting and expanding economic rights for everyday people.

ALEXANDRIA OCASIO-CORTEZ: Absolutely. One of the big reasons that we’re in the situation that we’re in right now is because of the corrupting role of big money in politics with lobbyists and so on. We wouldn’t be having this climate crisis at the level that we are having right now if corporations like Exxon Mobile hadn’t dumped so much money in lobbying the federal government against taking decisive climate action as far back as 1989.

DHARNA NOOR: And it seems like the climate crisis is really a winning topic for bringing out voters. This past weekend in Iowa, you had several rallies with Bernie Sanders focused on the climate crisis, the Green New Deal. We had a record turnout at the rally on Friday, the biggest candidate rally of any in Iowa this whole presidential cycle. What do you think it is about the Green New Deal about climate policy that really is speaking to voters in Iowa and other places?

ALEXANDRIA OCASIO-CORTEZ: The climate crisis is impacting every single American. It may be a different type of crisis, whether it’s a drought or whether it’s floods or whether it’s sea level rising or whether it’s wildfires. This is really impacting all of us in one way shape or form. And I think especially with the tragedies in Iowa earlier this year where huge portions of the state were flooded, people are losing their homes.

We’re talking about soybean yields dropping up to 25% by 2050. This is a true crisis. And so I think that it’s something that’s really animating and motivating a lot of people to act, and to also understand that a small little incremental climate policy is not what’s going to fix this problem. We need a massive de-carbonization of our economy. And any policy proposal less than that, frankly, is a form of denial of the situation that we’re in.

The Cruelty of US Justice System Exposed in a Single Video