‘Any of Us are Open to Police Terror’ 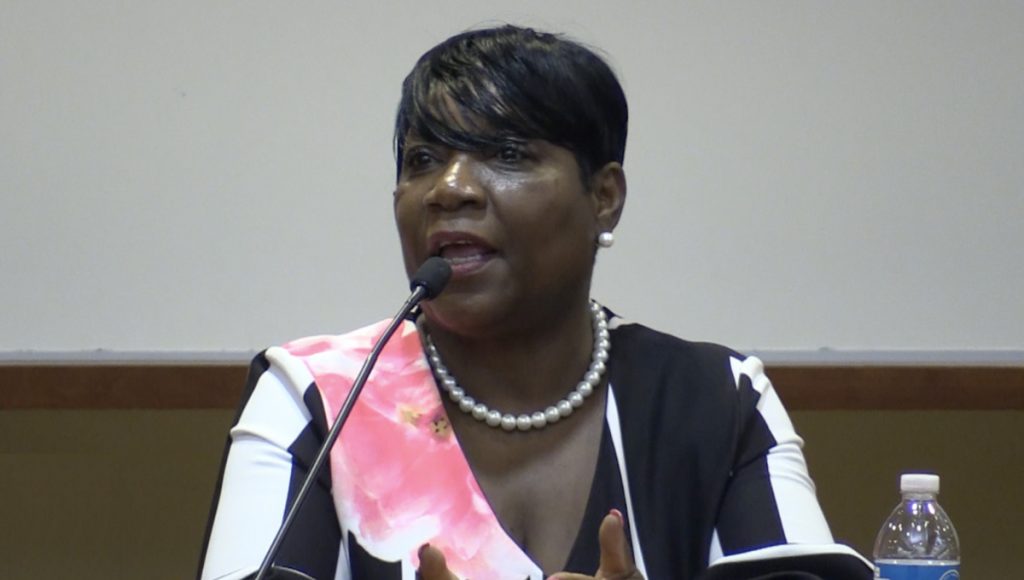 TAYA GRAHAM: This is Taya Graham, reporting for the Real News Network in Baltimore City, Maryland.

The price of police brutality continues to take its toll, and no one knows this better than the Mothers of the Movement. They’re connected by tragedy: the death of a child at the hands of police. Each one has had a child who died either while in police custody, or as a result of police actions. The deaths of their children has inspired them to speak out on behalf of victims of police brutality, and has fueled the Black Lives Matter movement. They have pushed past their own pain and adversity to make sure the devastation that has been wreaked upon their family is never visited upon another.

Tonight they are talking at an Open Society event at the University of Baltimore. We spoke to each one before the event to learn how they think they can change policing in America.

SAMARIA RICE: Well, I’m hoping sharing Tamir’s story will open up the conversation of racism in America that needs to happen daily. By the minute, by the second, you know, we’re still seeing police kill black people and brown people, everyday I wake up, on the television. So I just want Tamir to be that conversation piece. He was the youngest child, far as national attention goes. And everybody knows him. And you know, I just want him to be that child, that person, that ball of light and joy, to have this conversation of racism and the biased policing in America.

GWEN CARR: Pantaleo, after he killed my son, supposed to be on administrative duty. He’s gotten 40-. He got thousands and thousands of dollars in pay raises. Maybe not pay raises, but overtime. Yes. And this happened, the first year it happened and I found out about it, I had a press conference and took it to Mayor de Blasio. He said this would never happen again. Anybody on administration duty, administrative duty, would not get that type of money. The next year it happened again with Pantaleo. So what does that say? What message does that send to other officers? It just tells them that they could get away with murder and get paid for it.

MARION GRAY-HOPKINS: As a matter of fact, I’m working with an organization that’s called Honest, Inc. that has drafted up legislation and it’s called URLEIA, which is an acronym, U-R-L-E-I-A, which stands for Uniformed Reporting Law Enforcement Improvement Act. And what they have done after the killing of Michael Brown in St. Louis was they looked at every loophole where there was a gap in the process, and have created, proposed legislation that would address all of these loopholes. They need to be drug tested after every excessive force or deadly force. They need, they need to be drug tested.

Here in the state of Maryland the Law Enforcement Officers Bill of Rights allows them ten days to even be questioned. That needs to be zero. We are citizens. When we kill, we have to report right away. Right? So we need to get that done. We need independent prosecutors. We don’t want someone that works for, and the police, you know, are in bed with, if you will, for the lack of the right term right now. But they’re in bed together. You need someone that’s independent, that has no skin in the game, if you will, have that independent-. Certainly. We just want accountability.

GWEN CARR: My son was a very jolly person. Everyone loved him. He was the life of the party. My family, when we had family meetings, they would wait for him to come because they know that we were going to have a good time, because he was just that type of person.

MARION GRAY-HOPKINS: Gary was just, he was a wonderful kid, not only because he was my Mikey but he was just a wonderful person. Gary enjoyed writing, loved writing, thus the journalism major, mass communications major, and journalist. And Gary was an aspiring rapper. He was a jokester. He loved to play jokes on everybody. He was a mentor to his peer group, so he was always leading the pack, right. Such a, such a great kid, and his, his peer group looked up to him. Thus, you know, that particular night, you know, he had to play the role of the mentor. Far as sports he liked, it was like, basketball, football, swimming. He was on a soccer team in the third and fourth grade. So he was really an all-American kid that liked American things.

TAYA GRAHAM: And he was the baby of the family, too?

MARION GRAY-HOPKINS: Yes, he was the baby, and keep the family laughing, like the glue that keep us all together. Like the piece that’s missing from my puzzle right now. So yeah.