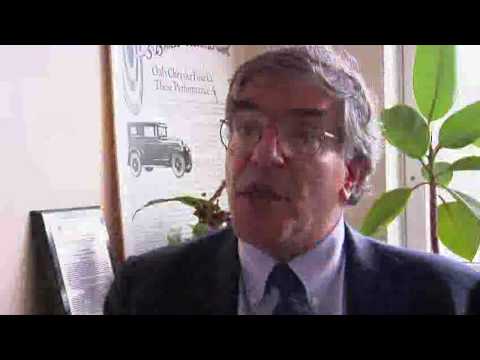 VOICEOVER: "Objects in your rearview mirror may appear closer than they are." You’ve heard that phrase before. And when it comes to the pending auto industry bailout, past decisions to build gas guzzlers have come back to haunt the Big Three automakers. Many of those decisions were made possible by Democrats, and in all likelihood it will happen again. Looking down the road, things look bleak: dismal auto sales and all-time stock loads are threatening to obliterate the Big Three. Ninety-five thousand workers have been laid off this year. Should one of the Big Three automakers collapse, we could see tens of thousands more workers lose jobs. Therefore the auto lobby is back on Capitol Hill, asking for $25 billion in bailout cash, and they’re turning to reliable friends: Democrats in Congress. House Speaker Nancy Pelosi and Senate majority leader Harry Reid are requesting that the Treasury Department siphon off funds from a $700 billion bailout package. President-elect Obama brought it up in a meeting with President Bush, but Bush is resisting. Over the years, the auto lobby lavished millions on Congress to block higher fuel mileage standards, which would have forced the industry to create more fuel-efficient cars. Had they acted years ago, the Big Three might have better world market share today. But instead of building green cars, the auto industry has spent considerable time, energy, and money on Capitol Hill defending the status quo, and now their time is up.

DAN BECKER, DIRECTOR, SAFE CLIMATE CAMPAIGN: The auto industry buys influence with campaign contributions. They also spent $70 million in 2007 lobbying Congress against raising fuel economy standards. The leader of the auto industry’s efforts on Capitol Hill is John Dingell, a long-time Democrat. He’s the longest-serving member of the House of Representatives, and his wife is a lobbyist for General Motors. Congressman Dingell’s chief legislative aid, Dennis Fitzgibbons, is a former lobbyist for Chrysler.

VOICEOVER: Over the course of his career, Detroit Democrat John Dingell has received more than $800,000 from the automotive industry, and he owns significant stock in General Motors. Dingell supports giving the $25 billion to General Motors, Ford, and Chrysler. He has fought against raising fuel efficiency standards for years, much to the dismay of environmental groups. Many say if lawmakers like Dingell had not protected automakers, they might have adapted.

BECKER: First of all, they deny the problem. Secondly, they’ve said, "We can’t make cars that go 40 miles per gallon," which is what we’ve been advocating for many years. Now, of course, I drive a 50 mile per gallon hybrid, and that made it harder for them to make that argument. So they say, "Well, but it’ll cost billions of dollars, and we’ll end up shutting down all of industry, and there will be thousands and thousands of jobs lost."

VOICEOVER: In early 2007, Congress finally passed new Corporate Average Fuel Economy, or CAFE, standards. It required all cars on American roads to reach 35 miles per gallon on average. But the auto industry has until 2020 to make that happen.

BECKER: Members of Congress got tired of being lied to by auto companies. Their constituents were demanding that Congress do something about high gas prices. They were concerned about global warming. The states were moving forward with clean car legislation. Tom Carper from Delaware got up and said, "Look, you always told me that if we ever passed CAFE standards, you’d lose market share, money, and jobs. Well, you’re losing market share, money, and jobs, and we protected you from higher CAFE standards. So the reality is you don’t know what you’re doing, and you can’t look backward forever."

VOICEOVER: If the Bush administration rejects giving the automakers more money, Democratic Senator Carl Levin from Michigan says Congress will move to amend the $700 billion bailout law to include automakers.

BECKER: And they want no strings at all, and that doesn’t seem like it should fly. If it’s our tax money, we should get something for it, and the thing that we really need is less pollution, less global warming, less oil addiction, and saving money at the gas pump. And that’s what more efficient cars can give us.

VOICEOVER: Critics pose an even more important question: how long will the government’s crutch be necessary?

PETER MORICI, ECONOMIST AND PROFESSOR, UNIV. OF MARYLAND: In addition to the costs of refitting their plants, they don’t even have the vehicle designs to do the job. Ford and General Motors will be able to bring over some vehicle designs from Europe. Chrysler doesn’t even have that. It’s not really in a position to put a competitive vehicle on the ground.

VOICEOVER: The auto industry, like Wall Street, will likely get the bailout. Even after years of bad decisions, taxpayers will pick up the tab. With billions headed their way, many doubt Detroit has learned its lesson. Consumers can only hope that American automakers are ready to permanently shift gears.