From militarism to peace

Col. (Retd.) Ann Wright on responsible US withdrawal from Iraq and the prospects for a peaceful future

Col. (Retd.) Ann Wright on responsible US withdrawal from Iraq and the prospects for a peaceful future 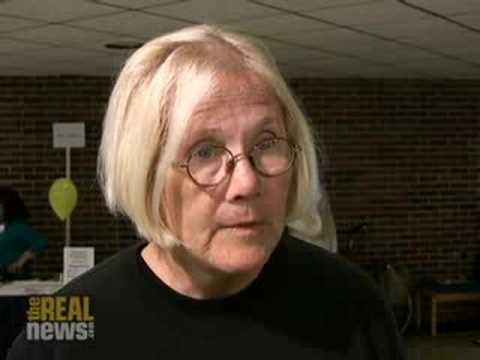 From militarism to peace

GERALDINE CAHILL, TRNN: I’m Geraldine Cahill, and we’re outside Concordia University in St. Paul, Minnesota, where a group calling themselves the Peace Island is holding a two-day conference alongside the Republican convention. Speaking at a session called Justice and Human Rights was retired Col. Ann Wright. Col. Wright delivered her resignation to the then secretary of state Colin Powell just one day before the first bombs fell on Iraq. We caught up with Col. Wright after she spoke to conference attendees, and asked her about current military involvement in Iraq and Afghanistan, and what hope she feels for a peaceful withdrawal of troops.

COL. (RET.) ANN WRIGHT: Well, the way you get from militarism to peace is it has to be a conscious effort, and it has to be a rejection, really, of a lot of the things that have been happening to our society over the last 100 years, where, indeed, the whole corporatization of our society, then the privatization of military functions, which means that the corporations become interwoven on the issue of national security, national defense. And so it’s in the corporate best interests that we have a large military, that we, oh, sometimes simply go to war to test out the equipment, to tear up the equipment. When I was in the military, we jokingly on one level said, "Oh, you need to have a little, good war about every ten years, because your equipment’s worn out."

CAHILL: As a colonel yourself, how would you withdraw troops responsibly?

WRIGHT: A responsible withdrawal is a long withdrawal. As much as I’d like to have everybody out tomorrow, it’s a minimum of 18 months, I think, by the time you withdraw. The troops are easy to withdraw, but the huge amount of equipment we have in Iraq right now—five years we’ve been in there. We have 14 permanent, I mean, bases, but you might as well call them major American cities—these are big American cities that have been built in Iraq. And I doubt if we’re just going to leave them there for the Iraqis. I think the United States will remove a lot of this stuff, and that will take a long time. After Gulf War I, a 100-hour war, actually, other than the air campaign, it took over 18 months to remove the materials that were in the Middle East during that incursion, when we had 500,000 people poised, ready to go into Iraq. The point is that we’ve got to give the political space to the Iraqis to resolve their problems.

WRIGHT: It would be a major disaster, foreign policy disaster, military security disaster, national security disaster if the United States would attack Iran. The attack would be from air bombs, missiles from naval vessels. The US doesn’t really have enough ground troops to go in, thank God. But the havoc that can be wreaked on Iranian cities is substantial, and what can be wreaked by the Iranians targeting US interests in Iraq and Afghanistan and in the Persian Gulf is substantial too. I mean, the Iranians have a fully equipped military. After the eight-year war with the Iraqis, they’ve rebuilt their military. They’re a country that has three times as many people as Iraq has. It’s a cosmopolitan environment. They will not take an American attack lying down.

CAHILL: Do you see a difference between George Bush and John McCain’s foreign policy?

CAHILL: The conference you’re running here is called the Peace Island. And it’s also supposed to be hope in a time of crisis, if this is the crisis, both the involvement in Iraq, perhaps an escalation in Afghanistan. We’ve also got a heightened militarization here in the United States. What is the hope? And is there hope with Obama if he gets elected? Or what can people do otherwise to ensure that it’s the hope that wins out, it’s the peace that wins out?

WRIGHT: No matter who is elected in November, we will have to put pressure on him to stop the war in Iraq. I mean, even though Obama says, "Yeah, I’ve got a plan to end the war," he also has a plan to increase our military by 95,000 people. He’s planning on sending more people into Afghanistan. We don’t know a firm timetable that he says he’s going to withdraw one combat brigade per month; we don’t know when that’s going to start. He doesn’t talk at all about the 180,000 civilian contractors we have there. We only have 140,000 military right now. We’ve got many more contractors that are there.

CAHILL: You wanted to join the military yourself, I imagine, as a younger girl. Would you have signed up to serve under an atmosphere like this?

WRIGHT: Well, it’s interesting. I signed up during another very unpopular war, the Vietnam War. It was going on. But I didn’t sign up to go kill Vietnamese. I didn’t want to go to Vietnam; I wanted to get out of Arkansas, the state that I grew up in. So, like most of the kids that join the military, you don’t want to go kill anybody, but you want to get out of Arkansas, a family that may be abusive; you may not have money for college. You know, there is such a variety of reasons. I would not join up to the military right now. I think our military is being abused by the government and the Bush administration. I still can be recalled to active duty, as when I retired, I purposely put myself into the retired ready reserve. So in case of national crisis, I can be recalled to active duty to help, ’cause I’ve got a lot of skills. But if the Bush administration should recall me to active duty, I would have to say, "You’ll have to court martial me, because I will not go." I would rather go to jail and save my conscience than do the bidding of the Bush administration on what I believe is an illegal war.