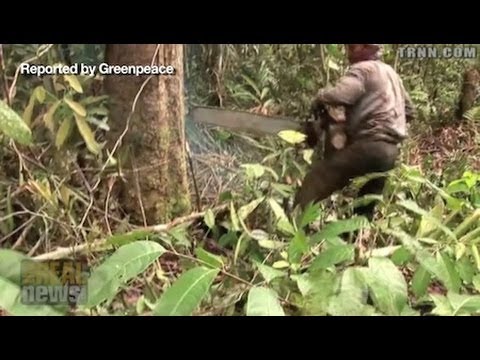 In environmental news, after being targeted by activists, the world’s largest palm oil company, Wilmar International, has committed to reaching zero deforestation, which is known as a major contributing factor to climate change.

Now joining us to discuss this is Amy Moas. She’s a senior forest campaigner for Greenpeace. Moas focuses on the forests of Southeast Asia, with a particular attention on Indonesia.

So, Amy, talk about this apparent victory. What is the significance of this? And talk about the campaign that allowed or that pushed Wilmar International to commit to zero deforestation.

AMY MOAS, SENIOR FOREST CAMPAIGNER, GREENPEACE: That’s right. So, as you said, Wilmar International, the largest player in the palm oil industry, committed to a zero-deforestation, no-peatland development and no human exploitation policy. So while we are hesitant to call it a victory just yet, we do think that if properly implemented, that this policy has the potential to transform what has historically been a very destructive industry.

Wilmar International was a target of campaigns by Greenpeace and other nonprofit organizations all over the world for many years, about seven years, actually. So it took quite a long time and a lot of pressure to convince them that the best thing to do would be to move away from their destructive reign.

NOOR: And just talk about what the impacts of palm oil production and deforestation are on places like Indonesia and the rest of the world.

MOAS: Sure. Yeah. So palm oil is a type of vegetable oil that is made from the fruit of palm trees.

So palm oil companies are going into the national rain forest, are literally bulldozing the natural forest into the ground, and in its place are planting rows and rows of palm trees so that they can harvest the fruit to turn it into the palm oil.

Now, these forests, you know, historically were habitat for endangered wildlife, like the Sumatran tiger and the orangutan. And they also used to provide services to our planet, like cleaning our air and our water. There’s nothing natural or lush and rich about a palm oil plantation. It’s rows and rows of the exact same tree that’s planted by humans and farmed by humans. So there’s no mistake on whether or not these palm oil plantations are forests. And we lose a lot of the services that these forests used to provide when they’re replaced by palm oil plantations.

NOOR: And so you’ve had this, I guess, potential victory regarding one corporation. What parts of this campaign, this multi-your campaign you discussed, what parts of it can be used for other similar campaigns? And what are the lessons for activists and environmentalists that are concerned about issues like deforestation?

MOAS: Yeah. So our work is definitely not done. Greenpeace and other NGOs around the world are continuing to focus on the palm oil industry. We actually are calling out other palm oil giants, like Cargill and Sime Darby, to abandon their destructive footprint. If the largest palm oil trader can do it, so can they.

We’re also calling on consumer companies. We believe that the only way that palm oil with no association to deforestation is going to be produced is if there’s demand for it. So we call on brands of products that we use and love every day to make sure that the palm oil that’s in them, in their products, is actually sustainable and doesn’t lead to Tiger extinction and deforestation, so companies like Procter & Gamble, Colgate-Palmolive, Johnson & Johnson, they can no longer sit back and ignore the impacts of the palm oil that they’re buying. We need them to also institute these no-deforestation policies to ensure not only that the products that we buy and use are living up to the standards that consumers want, but also to impact what’s happening on the ground in Indonesia, so that other palm oil producers like Wilmar will commit to doing the right thing on the ground.

Now, if people go to Greenpeace.org, you can learn more about companies and their policies on palm oil and what people can do to influence them. It really is when we can harness the power of consumers worldwide that we can really make the biggest difference.

NOOR: And finally, in related news, Google, the NSA, and the U.S. Geological Survey have developed the first high-resolution map on global deforestation. Talk about the significance of this, how this can be used as a tool for activists and environmentalists, and any shortcomings this map may have.

MOAS: Yeah, that’s right. So first and foremost we applaud the work that scientists and the agencies put into producing this map. We do think that it will be a really great tool for educating the public about the impacts that humans are having on the forest.

Unfortunately, there are several shortcomings and flaws in the way that the map was put together that really do limit its accuracy and its applications. So, for example, palm oil plantations, the rows and rows of the exact same tree, are actually seen as forests in this map. So you can see forest gain. And that’s a little bit misleading for people who maybe don’t understand the intricacies and the drivers of deforestation. So natural disturbances like forest fires, for example, there are several ecosystems that rely on forests for the health of the ecosystem. But those fires in this map appear as big swaths of deforestation, of forest loss, while unnatural bulldozers and chainsaws that are destroying the forests can actually show up as forest gain if palm trees were planted quickly after. So it really does skew what’s happening on the ground and what we’re losing.

Like I said, the services that natural forests provide, like cleaning our air and our water and providing habitat for endangered wildlife, we lose all of that when we create palm plantations. But the map doesn’t necessarily depict that.

NOOR: And just to clarify, a teen from the University of Maryland also took part in creating that map.

MOAS: Thanks for having me.

Amy Moas, Ph.D. is Senior Forest Campaigner for Greenpeace. For more than 40 years Greenpeace has been a leading independent campaigning organization that uses peaceful direct action and creative communication to expose global environmental problems and promote solutions that are essential to a green and peaceful future.Moas focuses on the forests of Southeast Asia with…