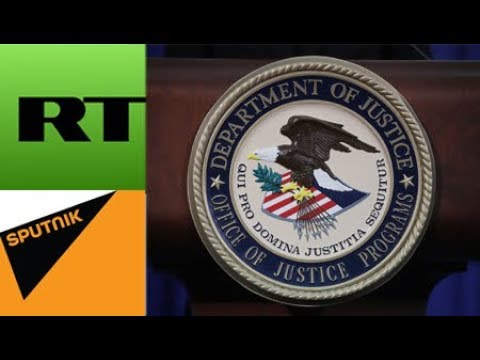 AARON MATE: It’s The Real News. I’m Aaron Mate. The U.S. government is scrutinizing Russian state-owned media outlets as potential foreign agents. According to reports, Sputnik is under FBI investigation, and RT has reportedly been asked to register under the Foreign Agents Registration Act. To discuss this I spoke to independent journalist Alyona Minkovski. She is a former host of HuffPost live, and also The Alyona Show, which aired on RT.

I want to ask you about one development that broke here in the U.S. on Monday that has to do with Russia, which is that it emerged that the Justice Department has asked people associated with RT, the Russian state-owned television network, to register as foreign agents. And concurrently, there’s also news that the FBI is investigating Sputnik, the Russian-owned radio station that broadcasts here in the U.S. As part of that investigation, the FBI reportedly obtained thousands of emails and files from a former Sputnik correspondent as they look into this organization, a case I think that raises some basic media freedom issues.

A. MINKOVSKI: Yeah, it certainly does. One thing that we’ve learned from this election and the entire debate that we’re having as a whole is that people are very much influenced by what they see on TV, by what they hear on the radio or in podcasts, by what they read. And to an extent, that obviously influences the outcome of an election. So a lot of people, or the U.S. government I should say, is currently focusing its eyes for a number of reasons on RT, on Sputnik, which by the way, jut from what I know, these are both Russian government-funded media entities. I used to work for RT. I hosted a show at RT America. And they all exist under this kind of umbrella structure of Russian government-funded media organizations. Sputnik and RT both have offices in DC. Sputnik now has an FM station that they’ve taken over. RT America, the DC, New York, Miami bureau, they have their own programing that’s different from what RT International does, that airs just in the United States.

It’s always interesting to me because I think that, sure, there’s a lot that you can easily criticize about RT. I’m actually not really that familiar with Sputnik’s content, if I can be honest. But it’s fascinating to me the kind of obsession and fear that seems to exist within the U.S. intelligence community and within the U.S. government. There is that report that came out in early January, a U.S. Intelligence Community assessment, about Russian interference in the election, and they had a couple pages on RT. And some of the things that they focus on that were so subversive was coverage of the Occupy Wall Street movement and coverage of climate change.

So I think that something like this raises a lot of questions because there are a lot of good people who are trying to do good journalism at those organizations, and there’s a lot of questionable journalism at those organizations, too. But whether or not you should use a World War II era law that makes these entities register as foreign agents, I think should make us ask a lot questions because then there’s a certain precedent being set because normally that’s not actually enforced from what I understand here in the United States. When Russia actually kicked out a lot of NGOs because they had a same foreign entity law that was passed, human rights organizations widely criticized it.

So I think that we just have to be kind of careful here. I think that we have a lot of questions to be asked as a society about what people are willing to believe, what way we can try to make sure that the information that’s being given to audiences and the content that’s being put out there is actually true, and how do you differentiate and make it obvious that things aren’t true or are fake. But to necessarily make an organization, to try to censor them in any way because what this foreign agent registration act would make them do is not only hand over financial disclosures but also information about their content. So I think that that’s something that we should be very careful with supporting, especially there are many people out there who think that RT is just propaganda, and you can easily believe that, but do you necessarily want to promote a move like this by the U.S. government?

AARON MATE: I think that’s a great point. The focus of these probes is apparently whether or not Sputnik and RT are undeclared propaganda arms of the Kremlin, but the problem with that is that if you held that standard to all networks, whether they’re private or state like Al Jazeera or China’s network or the Turkish network here in the U.S., I’m not sure if we could have any networks in operation, even if there is some truth to the criticism of what RT and Sputnik’s coverage is doing.

A. MINKOVSKI: Yeah. There’s a lot of propaganda out there, and it certainly isn’t all just Russian.

AARON MATE: We’ll leave it there. Alyona Minkovski, independent journalist, former host of HuffPost Live and The Alyona Show. Her article for The Nation is called “Meet the Activists Running for Office in Moscow.” Alyona, thanks very much.

A. MINKOVSKI: Thanks for having me.