As 100 are arrested in New York, hundreds rally in Maryland to demand local officials stop cooperating with ICE. Hours after the protest, the Howard County Executive told TRNN he will review their ICE contracts

As 100 are arrested in New York, hundreds rally in Maryland to demand local officials stop cooperating with ICE. Hours after the protest, the Howard County Executive told TRNN he will review their ICE contracts 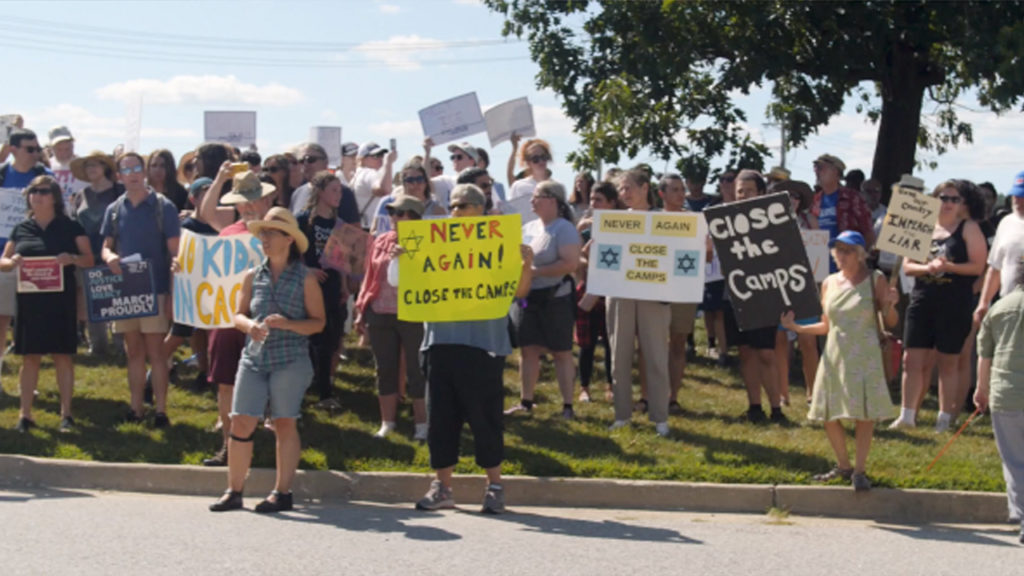 We’re outside of the Howard County Detention Center. Hundreds of people gathered here today to protest ICE, Immigration and Customs Enforcement, and the detention of immigrants across the country.

RABBI ARIANA KATZ: We’re out here as a group of Jews and our allies on Tisha B’Av–the national day of Jewish mourning–to say that never again is now, that family separation and detention and deportation is an ethical moral issue for our entire country, and it is a Jewish issue for us specifically.

JAISAL NOOR: While hundreds rallied in support, more than two dozen Jewish protesters and their allies risked arrest to block an entrance to the detention center for several hours. Their demand: Howard County end its contracts with ICE, which The Sun reported has earned it 14 million dollars since 2013. Howard County executive Calvin Ball, a Democrat, has condemned recent ICE activity in the area, and has said only immigrants with criminal records are being held at the detention center. But advocates say not all of those detained have criminal records.

EVAN SERPICK: To end its contract with ICE. They have an intergovernmental contract that allows ICE to place immigrants who are collected from anywhere in the region, even in the border theoretically, could be brought here. And we are asking County Executive Ball to end that contract. Anne Arundel County has done that, other counties have done that. He can absolutely stand with our immigrant communities and say that he’s not going to be complicit in their crimes.

That’s the first demand. The other two are to close the camps, the concentration camps at the border, which are a clear sign of real persecution and a prelude to genocide. It’s something that we’ve seen not only in Europe, but around the world. Concentration camps are the beginning of genocide. And abolish ICE. There’s no reason that an agency that is designed and was created in the relatively recent history to persecute immigrants needs to exist.

RABBI DANIEL BURG: So I’m here most of all to support my kids, who are amazing heroes for social justice. But we’re also here with Jews United for Justice and with a collaborative coalition of a number of synagogues and other Jewish organizations to say that our Jewish values and our American values really stand in kind of distinction to a policy that would allow our jails, our prisons to lock up refugees and immigrants, especially without due process.

SHAMIR BURG: And this kind of thing has happened for so many years. We want it to stop. We don’t want this to happen anymore.

ELIYAH BURG: What if someone had said that, say, when Jews were coming in waves to the United States to escape persecution in other countries, how would that keep us safe? Think about the situation in Mexico and in other South American Latin countries. A lot of those situations are dangerous and terrible, and that is why people are coming here.

JAISAL NOOR: The protest, just out of Baltimore, was one of more than 50 across the country, organizers say, against Trump administration immigration policies.

BEATRIZ HERRERA: My message to Trump would be to touch his heart so that he can think about what we’re going through to try to understand how we feel, to try to feel the pain that we’re feeling right now, and to recognize that our community doesn’t wish to do harm to anybody, that we only want to work and to have a better life.

JAISAL NOOR: Even after today’s protest, the demonstrators here said they’ll continue to keep pressure on local officials, state officials, and national officials to help end the detention of immigrants.

For The Real News, and with Taylor Hebden, this is Jaisal Noor.

Trump Is Politicizing the Power of Immigration Judges