The Central American country is the first country in the world to establish a blanket ban on metal mining, protecting the environment following a 12-year political struggle

The Central American country is the first country in the world to establish a blanket ban on metal mining, protecting the environment following a 12-year political struggle 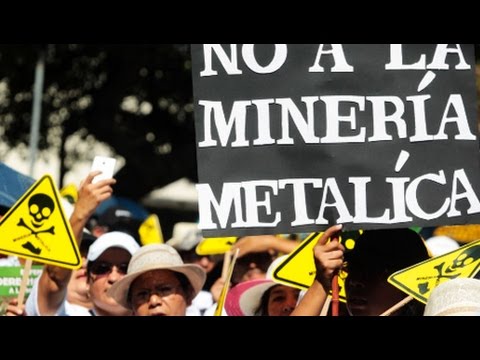 DIMITRI LASCARIS: This is Dimitri Lascaris for The Real News.

Several days ago, on March 29th, El Salvador’s Legislature voted to prohibit mining for gold and other metals, citing environmental concerns. The historic vote, in which 69 of the country’s 84 legislators cast ballots to prohibit the mining of metals, both above and below ground, makes El Salvador — Central America’s smallest and most densely-populated country — the first country in the world to bring about such a ban.

The law comes after years of violence and social tensions around mining in the country, and strong opposition to mining from local communities, civil society organizations, the Catholic Church, and more than 77% of the country’s population, according to a recent poll.

To discuss how this ban came about, and its significance, we are joined by Andrés McKinley. Andrés is a specialist in water and mining at the José Simeón Cañas Central American University. He also worked for seven years with OXFAM America, as a regional coordinator for Central America, on the Program for Mining Industries. And he’s the author of a 2015 report titled, “The Threat of Metal Mining in a Thirsty World.”

Thank you very much for joining us, Andrés.

ANDRÉS MCKINLEY: Thank you, Dimitri. It’s nice to be here.

DIMITRI LASCARIS: Well, this is obviously a huge win for the environmental movement in El Salvador. Talk with us please, briefly about how long the battle has been going on, and how this victory came about.

ANDRÉS MCKINLEY: Well, the struggle around mining has been going on in El Salvador for approximately 12 years. When we began this struggle, we were confronted with a situation in which nobody really knew anything about mining. No one knew much about the threat of metallic mining to a country like El Salvador. Which has such a devastated environment already, and which would have its future put into danger, if we opened the door to metallic mining.

So, when we started talking with communities and with policy decision-makers in the country, we saw this enormous vacuum, in terms of information, and awareness, sensitivity to the threat that the mining industry represented.

So, mining companies, who in the past had had no interest in El Salvador, because of the low concentrations of gold and silver that exist in this country, all of a sudden became adamant about pursuing exploitation rights for those metals in El Salvador.

So, you know, our program, when I was with OXFAM America, began with the logic of empowerment. Trying to work with communities who were most threatened by the possible incursion of mining companies into the country. We focused on education; we focused on informing, raising awareness. We focused on organization, building alliances and other components in an empowerment strategy. To begin to build actors of social change that could confront this attempt on the part of international corporations to come into El Salvador, and mine its minerals.

DIMITRI LASCARIS: Now, 90%, I understand, or more, of El Salvador’s surface water is polluted, according to the country’s Ministry of Environment and Natural Resources. How, if at all, did the mining industry contribute to that extraordinary level of contamination?

ANDRÉS MCKINLEY: Well, El Salvador has had mining in the past. We talk about mid-level industrial mining. Most of it was subterranean mining, and there are areas of this country that are still suffering from acid mine drainage, generated by these mines. The mines are no longer operating, but they have not been adequately closed either.

And we have cases like San Sebastian, in the Department of La Unión, where mining has been curtailed for the past 40 or 50 years. But the existing mines, or the existing pits or tunnels, in that area continue to generate acid mine drainage, and have essentially destroyed the primary water source for hundreds of communities in that area.

Also, in terms of quantity of water, El Salvador has been described by several international bodies like CEPAL, like the Latin American Tribunal of Water, like the Global Water Partnership — we’ve been described as being a country in the process towards water stress. In which, if we continue along the same path that we’ve been going for the past several decades — in terms of the management of water — we are rapidly approaching a situation in which we’re not going to have enough fresh water resources to sustain human life.

The Human Rights Ombudsman’s Office, last year put out a report, that concluded that, as I just mentioned, if we continue this current path regarding water management in El Salvador, this country has approximately 80 years of sustainable life for human beings. Now, that’s a dramatic figure.

It might sound apocalyptical to many people, but it’s a warning that we have to make changes. And one of the first changes for us was to begin to go to the source of the problem, recognize the traditional causes of pollution in El Salvador, or water usage, that has left us in this vulnerable situation, and take policy measures to correct it.

The first policy measure, which we took, was to prohibit metallic mining. An industry, which utilizes enormous quantities of water, the average mine in Central America, and other countries where they are permitted mining, utilizes between a million, and 6 million liters of water per day.

So, obviously a country that’s approaching a situation of water stress is not an appropriate place for metallic mining.

DIMITRI LASCARIS: I understand that despite all of those quite stark facts, the Australian-Canadian gold mining company, OceanaGold, and its subsidiaries in El Salvador, consistently and very vigorously pushed back against this initiative, this historic initiative. Could you describe for us how they did that –- what form …?

ANDRÉS MCKINLEY: (laughs) Well, basically, for the past ten or so years, since 2006, we have been confronting a very aggressive campaign on the part of trans-national mining companies. Primarily OceanaGold, who at that time was called Pacific Rim, and we were confronting a campaign of lies, of manipulation, of threats, of assassinations of anti-mining activists, and of legal suits. And so, this has been the nature of the campaign of Pacific Rim, now OceanaGold, over the years.

They have consistently been trying to convince communities, for example, that the environment of El Salvador is in good shape, that it can resist the impact of metallic mining. The last time they made that assertion was on the 14th of March, in a television interview. They try to convince us that there’s a new technology in the mining industry that allows us to do mining with almost zero percent risk factor.

The fact is, that there are new developments in the technology of mining, but those new developments permit companies to mine lower concentrations of ore; they don’t guarantee the well being of natural environments in the face of mining activities. And, again, because of the vulnerability already of El Salvador’s environment, we couldn’t tolerate an industry that was going to bring more damage and destruction to the environment.

Pacific Rim/OceanaGold tried to convince communities, poor communities with humble people — frequently with lower levels of education — that cyanide was not a dangerous chemical, was not a threat to human life. We know that cyanide is an extremely dangerous chemical, that is utilized in enormously large quantities for mining, and that a quantity of cyanide the size of a grain of rice can kill a human being.

Pacific Rim/OceanaGold has tried to tell us that they are a responsible mining company. But it’s important to understand that when this company pursued its first license to exploit minerals, they never complied with the three key requirements of the existing mining law.

Instead of complying with the law, they opened this costly campaign called Green Mining, trying to win hearts and minds among the Salvadoran population, and then they threatened to sue us -– and they did. They brought a legal suit against El Salvador in the ICSID Tribunal of the World Bank, for $250 million, without ever having complied with the underlying requisites of our mining law.

So, you know, this is not a responsible mining company. It’s a company that’s been abusive, it’s a company that generated an environment in Cabañas, the department where they wanted to mine, that resulted in the deaths of five activists. Including an eight-month-old child who was about to be born from her mother, who was ambushed and killed by pro-mining forces in that department.

DIMITRI LASCARIS: The fact that despite all of these efforts, this historic law has passed in El Salvador, and this precedent has been set. Do you think that that is going to provide an impetus for similar bans of similar scope to be passed by other countries in the region?

And if so, where do you think the best hope for such a legal development to occur is at this time?

And this is what El Salvador has demonstrated to the world. That communities affected by mining, or threatened by mining, have that right to consider the costs and benefits of this industry for their country, for their community. And exercise their sovereign right to say no. Hopefully, this will be an example to those countries around the world that are in that situation.

If you were to impose a map of world water conflict over a map of large-scale mining projects around the world, you would see this coincidence. I point it out in the book that you made reference to at the beginning. So, where there is mining, there is conflict, and there’s conflict mainly because local communities are not consulted. They’re not taken into consideration.

And, so, yes, we hope that our victory will be a stimulus, will motivate other countries, and other communities to stand up for their rights, and fight for the national sovereignty.

In the case of Guatemala, there are eight projects ready to go that would contaminate major rivers flowing into El Salvador. In fact, there’s one mine in Guatemala, Cerro Blanco, which is operating currently, is contaminating a nearby river, the Rio Ostúa, which flows into Lake Güija. Which is a lake shared by Guatemala and El Salvador, and is contaminating that lake with arsenic.

So, it’s a… you know, we’re not arguing. We want to be clear: we’re not trying to argue that metallic mining should be banned around the world. We recognize that we need minerals, and metals for economic development. What we’re arguing is, what responsible mining is for us, is you don’t try to mine in vulnerable, environmentally vulnerable conditions, like El Salvador.

So, mine in Nevada, if you want. Mine on the moon, if you want. Don’t try to mine in El Salvador. This country is not an adequate environment for metallic mining.

DIMITRI LASCARIS: Well, this is obviously a story that is going to continue for all the reasons you’ve articulated.

This has been Dimitri Lascaris discussing with Andrés McKinley, a historic law in El Salvador that is banning metal mining. We appreciate the opportunity to talk to you; Andrés, and we look forward to hearing more about this story in the future. Thank you very much.

ANDRÉS MCKINLEY: Okay. Thank you, Dimitri. Have a good day.

DIMITRI LASCARIS: And this is Dimitri Lascaris for The Real News.