Chavez Misses Inauguration, Will Be Sworn in by Supreme Court if he Recovers

Alex Main (CEPR): Venezuelan opposition hopes to take advantage of crisis but after sweeping state elections and winning decisively in the Presidential election, Chavez forces unlikely to lose power in a new election

Alex Main (CEPR): Venezuelan opposition hopes to take advantage of crisis but after sweeping state elections and winning decisively in the Presidential election, Chavez forces unlikely to lose power in a new election 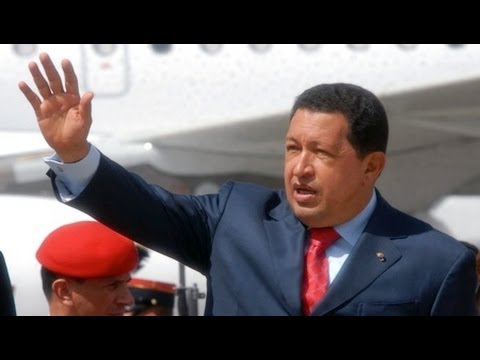 In Venezuela, the government announced that President Hugo ChÃ¡vez was too ill to attend inauguration on January 10, the day he was supposed to be sworn in for his third term. This has stirred up quite a bit of controversy about what happens next.

Now joining us to discuss all of this is Alex Main. Alex is a senior associate for international policy at the Center for Economic and Policy Research in Washington, D.C. He focuses on U.S. policy in Latin America and the Caribbean.

Thanks for joining us again, Alex.

JAY: So what happens next? As I understand it, the Supreme Court has ruled that it was okay not to attend the inauguration and that President ChÃ¡vez can be sworn in again at a future date by the Supreme Court. But how long and what are the parameters of that?

MAIN: Well, they have not been defined yet, and it’s not clear that they will be any time soon, as the Constitution is not very specific in this point. I mean, what the Constitution says is that normally the inauguration of the president should take place on January 10 before the National Assembly, but if not, it should be before the Supreme Court, and then it simply doesn’t specify a date. So at this point we’re left hanging, and we don’t know, really, what the state of President ChÃ¡vez’s health is. Clearly it’s not great at the moment. But there have been no images of him, and he has not been heard from directly, certainly not via television or radio, for a number of weeks now.

JAY: Now, a Brazilian minister, I think, accompanied Vice President Moduroâ€”I guess he’s still vice presidentâ€”back to Venezuela from Cuba. Am I right about that? And essentially to say that the Brazilians think the way the process is being dealt with is constitutional.

MAIN: That’s right. So that’s Marco AurÃ©lio, adviser to President Dilma Rousseff of Brazil. He was just recently in Cuba and had long meetings. It’s not clear whether he met with President ChÃ¡vez or not. He certainly met with [Vice] President Maduro. And he returned from that trip with some strong statements to the press, in which he said indeed he believed that it was constitutional for the inauguration to be postponed, and even offered that it might be postponed for as long as 180 days, according to the Constitution.

JAY: Well, that’sâ€”where is this 180-day figure come from? ‘Cause I’m hearing this in different places. Like, [crosstalk] one day you read there is no time parameter, and then another day we hear about 180 days.

MAIN: Well, the 180 days is based on Article 233 of the Venezuelan Constitution, where it says that if the president cannot, you know, fully function as president, in a temporary manner (this is a temporary condition), then he can be given a 90-days leave, if you will, and those 90 days are renewable. So that gives you a total of 180 days. So that’s what it says in that article.

JAY: Now, if President ChÃ¡vez’s health is such that he really can’t assume power again, which it seems that is his health conditionâ€”it’s hard to imagine that even if he recovers from the crisis he’s in at the moment, that he’s going to be in shape to run a government. What would happen next? Why postpone things? It seems that if that’s the case, they’re going to have to head into elections sooner than later.

MAIN: Well, that’s right. I mean, at some point, you know, of course they’re going to have to make a determination on whether ChÃ¡vez can be temporarily absent or whether he will be permanently absent. And I imagine it has to do with his recovery process in Cuba, and that there are still hopes that he can recover and reassume the presidency, although the picture seems pretty bleak, based on the communiques that we’ve had so far about President ChÃ¡vez’s health.

Now, if he shouldn’t make it, he’s given very clear instructions, or very clear endorsement, in any case, of the next candidate. And there would have to be elections within 30 days if it were announced that he is permanently unable to be president. And so in 30 days there would be elections, and President ChÃ¡vez clearly announced who he thought should be his successor, and that is NicolÃ¡s Maduro, the current vice president and foreign minister of Venezuela.

JAY: Now, we’re seeing in the American pressâ€”I believe it was The Washington Postâ€”today that quote-unquote the Americans are sending messages to Maduro, hoping for better relations and trying toâ€”I think the language was create new openings between the United States and Venezuela. What is that about?

MAIN: Well, I think that actually isn’t necessarily directly related to the current situation, because we learned that overtures began and some talks began towards the end of November, at which point President ChÃ¡vez seemed to be in better shape and it appeared that he would be continuing as normal in the presidency. That’s when talks appeared to have begun.

But I think, you know, regardless of that, the United States government is very clear that at the moment, you know, they probably will have to reckon with the forces of Chavismo for the foreseeable future. That was confirmed, really, in a strong way during the last elections in Novemberâ€”or, rather, in December, the regional elections, where the opposition did really quite badly. They won only 3 of 23 of Venezuela’s states, the governorships of those states. So that was a clear indication that the opposition is not gaining in popularity. If anything, it’s even declined a bit. And that’s despite the fact that President ChÃ¡vez, during nearly that entire campaign for the regional elections, was not present, was not able to be there and campaign, and so he wasn’t actually one of the big contributors to the success of those Chavista candidates.

MAIN: No, absolutely. I mean, you know, for a number of reasons, you know, there is hope that President Obama is going to have a different agenda from his first term and perhaps try to develop a more progressive agenda, certainly in terms of his foreign policy. His nomination of Republican former senator Chuck Hagel is an indication of that, I think.

Certainly, in terms of Venezuela, you know, that could be the case as well, although, you know, what we’ve seen pretty consistently so far with President Obama is that he isn’t particularly concerned about Latin American relations, you know, even with some of the important countries of that region, like Brazil. I think a lot is actually going to rest on the futureâ€”well, the presumed future secretary of state John Kerry. And Kerry has focused quite a bit on Latin America over his long career in the Senate. He had very progressive positions in opposition to Ronald Reagan’s policies in Central America in the ’80s. Since then, he has become a bit more conservative, along with, I think, you know, most of Congress. He’s kind of gone in that same direction. But one could hope that he will have a more enlightened vision of relations with Latin America, including Venezuela.

JAY: And if President ChÃ¡vez does not survive this, or if he’s not capable of coming back and resuming his office, what do you think in terms of the election? We would be into an election fairly soon after that as well. I think it has to be called within 30 days of that becoming clear. Is that correct? And then how does the electorial situation look like, given that President ChÃ¡vez’s party did sweep all the state elections and he just got reelected president? So in terms of the elections that will have to be called if President ChÃ¡vez can’t resume office, I mean, is there any reason to think that Maduro wouldn’t simply repeat the same electoral victories that his party just won on state elections and the reelection of President ChÃ¡vez?

MAIN: No. Really, you know, barring some sort of catastrophe, it would seem very unlikely that he would lose future elections. I think the opposition is quite clear on that, andâ€”or at least some of the opposition is, and particularly the opposition that is interested in electoral victories, because, unfortunately, you still have a sector of the opposition which seems to be more intent on trying to destabilize the country.

But those who are, let’s say, more mature about, you know, following electoral democracy’s sort of precepts, they seem to be trying to buy time, and they haven’t objected that greatly to the postponement of ChÃ¡vez’s inauguration. I think they see it as working in their favor. They would like to see perhaps a few months of rule under someone other than ChÃ¡vez, whether it be NicolÃ¡s Maduro or the president of the National Assembly, Diosdado Cabello, and then try to undermine that individual in order to gain some clout, which they don’t have at the moment. They’re very weak, so they don’t really have much to gain by having elections in 30 days.

JAY: Alright. Thanks very much for joining us, Alex.

MAIN: Sure. Thank you, Paul.