Venezuela’s Real Division Over Who Benefits from Oil Wealth

Alex Main: American "Mainstream" media accuses Chavez of leaving Venezuela "divided and polarized", but Venezuela is not divided over Chavez's personality, it's whether oil wealth will go to the people or the elite

Alex Main: American "Mainstream" media accuses Chavez of leaving Venezuela "divided and polarized", but Venezuela is not divided over Chavez's personality, it's whether oil wealth will go to the people or the elite 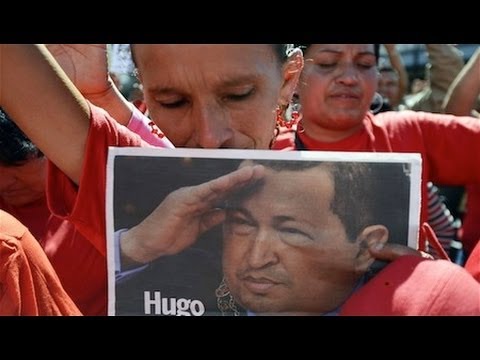 In Venezuela on Tuesday, President Hugo ChÃ¡vez died after a long fight against cancer. The American media wasted no time establishing its line towards the death. Here’s The New York Times: “ChÃ¡vez dies, leaving a bitterly divided Venezuela.” One of the articles: “Leftist’s demise at 58 deepens crisis in a divided country.” Another article: “A polarizing figure who led a movement.”

Well, my question is: exactly which country is it on this planet which is not bitterly divided? United States, for example, which just ended recently an election permeated, dripping with racism, a country where one president has been assassinated, a civil rights leader was assassinated, a candidate for president was assassinated? Which country is it that isn’t bitterly divided? And, of course, in a country with a lot of oil resources, there is going to be a big division about who owns those resources, just as there are exactly the same kind of divisions on every country on the planet. Anyway, that’s my diatribe.

Now joining us to talk about the death of Hugo ChÃ¡vez is Alex Main. Alex is a policy analyst at CEPR in Washington, D.C. He worked for some time as a consultant to the Venezuelan government.

Thanks very much for joining us, Alex.

JAY: So I guess what I’m saying is not that Venezuela isn’t divided. And yeah, to some extent that division will be bitter, although we’ll see exactly how this plays out. But every country is. But why is The New York Times making that their lead?

MAIN: Well, I mean, what we’re seeing now today, the leads of many papers, is a really absurd caricature of what ChÃ¡vez was and what Venezuela is that I think, frankly, is very insulting, really, for the Venezuelan people, who are transformed into sort of wild-eyed fanatics that, you know, worship ChÃ¡vez like the messiah, although apparently he’s driven the economy into the ground, if you believe what many of these media outlets are saying. And, you know, that’s just so remote from the reality on the ground in Venezuela.

ChÃ¡vez is often depicted as, you know, being a truly radical socialist. I think he probably is at heart. But he’s taken his country through, you know, several steps that are still far beyond socialism. He’s taken it from a wasteland that was the case in the 1990s that neoliberalism created in Venezuela, where the state was reduced to nearly nothing and the state oil company, which is absolutely vital for the health of the economy, was being progressively privatized and really in the hands of a managerial class that did not have the interests of the country at heart.

So that oil industry was recovered under President ChÃ¡vez with a great deal of division, polarization, and a real battle, as it turned out, a political battle that culminated in a coup d’Ã©tat in AprilÂ 2002, followed by a prolonged oil strike where this managerial class succeeded in closing down the oil industry and bringing the country to its knees economically. That was truly the worst time under Chavismo, and it was provoked by the opposition.

Since then, since 2004, the country’s economy has actually been quite healthy, with a pretty steady rate of per capita GDP growth of about 2.5Â percent per year, even when you include the effect of the global recession, which did hit Venezuela pretty hard in 2009 in particular. And today Venezuela is a much healthier place economically.

And we’re also seeing something closer to, I would say, a social democratic state, not a radical socialist stateâ€”we’re very far from that at the momentâ€”but certainly where the state has a great deal more control of various strategic sectors of the economy, and particularly the oil industry, and is doing a much better job of distributing the oil revenues to people that had been traditionally marginalized poor of Venezuela, and that the amount of poverty has really been cut in half.

JAY: So why, then, the venom coming from American media, most American politicians? I think what you’re saying is true. It was a kind of social democracy in Venezuela. Many of the kind of laws that exist there are not that different than some of the more social democratic countries in Europe. But the venom for ChÃ¡vez was certainly out of proportion to that. Now, one must say there was a very high level of rhetoric coming the other way from ChÃ¡vez towards the United States.

MAIN: Well, absolutely. And, you know, of course ChÃ¡vez, it’s true, he’s extremely irreverent and not really into diplomatic protocol. And, of course, that was very much the case when he gave the speech at the UN General Assembly in 2006 where he called George W.Â Bush the Devil and so on. And so I think that irreverence has hurt him a lot in the media. I mean, there are basic codes that you’re supposed to follow.

But I think there’s also a much deeper sort of ideological battle in all of this. And, of course, the U.S. traditionallyâ€”or, sorry, Latin America, traditionally the U.S.’s back yard, a real laboratory of sorts where neoliberalism was being implemented, really, throughout the region, Venezuela was at the center of that and a very strong ally of the U.S. in perpetuating that agenda throughout the region. And ChÃ¡vez came in and said to hell with this.

And, you know, he felt that his time was limited. He was, you know, fatefully very right about that. And I think ChÃ¡vez, one of his big characteristics: he was always a man in a hurry. He knew that his time was counted, and he had a lot to get done. And there’s still, of course, a lot to do in Venezuela. But in very little time he did manage to shake up the system quite a bit, quite remarkably.

JAY: I guess the thing that he didâ€”maybe the most significant thing he did, ’cause we’ll see in the long term what the successes of what he called the Bolivarian Revolution are, but he got elected and severalâ€”over and over again, several times on a platform, a campaign that was totally opposed to what the American agenda for Latin America was. And, you know, he survived to tell the tale forâ€”at least he survived till now.

And though I must say Maduro, the vice president, on television today actually said that they think that his cancer was induced in some way by what he called Venezuela’s historical enemies. I don’t know there’s anyâ€”I don’t think there’s any evidence of that, although they’re saying they’re hoping some day there’ll be a scientific commission to look into that. But let’s set that aside.

But he opened the door to this, you know, leftward move of all of Latin Ameria. And it’s no longerâ€”most of Latin America is not marching to the American tune.

MAIN: No, absolutely. Latin America has transformed. And I think we’re seeing it in a lot of the homages that are being paid to ChÃ¡vez today. We’ve heard from various countries, of course from some of the strongest allies, like Ecuador and Bolivia. Also from Brazil. Dilma Rousseff has given a very emotional fairwell to ChÃ¡vez in remarks today.

And, you know, what we certainly see is that it’s a completely different region from when ChÃ¡vez was elected. In the late ’90s, he used to joke about it. He’d be sitting at these big summits, regional summits with Fidel Castro across the table and say, you know, we’re the only two devils here, Fidel. But today, you know, from the U.S. perspective, there are many devils to deal with throughout the region. And ChÃ¡vez really helped carve out that political space.

And, of course, he also, you know, directly supported a lot of these leaders. He provided them with support that I think countered a lot of the U.S. support for some of the more elite interests throughout the region. He provided them with very crucial political support. And so, gradually you had a system of alliances that sort of stuck together and that is now a very solid one, certainly throughout South America.

JAY: Right. Thanks for joining us, Alex.

December 23, 2019
Sign Up for Our Newsletter
Help Us Make Real News!