Even though French president Francois Macron will probably have an overwhelming majority in the new National Assembly, the low turnout and on-going resistance to neoliberalism will complicate his program, says CEPR's Alex Main

Even though French president Francois Macron will probably have an overwhelming majority in the new National Assembly, the low turnout and on-going resistance to neoliberalism will complicate his program, says CEPR's Alex Main 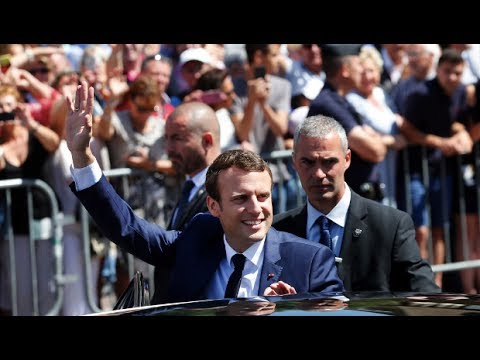 Gregory Wilpert: Welcome to the Real News Network. I’m Gregory Wilpert joining you from Quito, Ecuador. Recently elected French president Emmanuel Macron is on course for historic gains. His fledgling party, Republic on the Move, is set to trounce the traditional opposition in the Parliamentary election, following last Sunday’s first round vote. Pollsters predict the part and its center right ally, MoDem, could win as many as three quarters of the seats in the lower house, after the June 18 run-off. Meaning that Macron’s pro-business reform’s almost guaranteed to go through.

Macron’s party is more than 10 points ahead of its nearest challengers, the Conservative Republican party and its allies. Marine Le Pen’s far right National Front party is facing its second big defeat in a month. Projected to win just a small handful of seats, perhaps as few as one. But it was the Socialist party that suffered the most. The former ruling party is set to win just 30 to 40 seats. Leftist candidate Jean-Luc Melenchon, who won nearly 20% in the presidential race, said that Macron’s victory is no mandate because only one in two voters turned out to vote in Sunday’s first round. That’s a record low turnout.

Joining us now from Washington, DC, to analyze the results is Alex Main. Ales is senior researcher at the Center for Economic and Policy Research. Thanks, Alex, for joining us.

Alex Main: Pleasure to be with you, Greg.

Gregory Wilpert: Clearly the voters who supported either the leftist candidate Melenchon or the right wing candidate Marine Le Pen stayed home on Sunday. Their parties practically collapsed under the record-high abstention. How do you explain that? Why was there such a low turnout?

Alex Main: Well, I don’t think they all stayed home. Obviously Melenchon and his party, France Insoumise, didn’t do too badly. They got 11% of the vote. The Fro Nationale got over 13% of the vote. Of course, that’s nowhere near what Marine Le Pen, the presidential candidate for Fro Nationale, received in the first round of the presidential elections, where she got, I think around 22%. A little bit less than that. Around 21%.

What we saw play out is what does generally play out in French legislative elections of the last few elections. I can explain briefly why it’s only for the last few. What we see is that there is a high rate of mobilization around the presidential elections. Then those that are mobilized for the legislative elections are really the voter base for the winner of the presidential elections, and also, to a certain extent, the next up. That’s what we saw in these elections. But you’re right, the level of abstention is incredibly high. In fact, it’s a record for France under the fifth republic. The fifth republic, of course, has been around since 1958. In previous elections, abstention had been sinking and sinking, but it never quite reached this, rather I should say abstention had been rising and rising, but it never quite reached this level.

I think part of the reason for that is that indeed, there isn’t a lot of enthusiasm for the winner of the presidential elections, Emmanuel Macron. We’ve got to remember that he got 24% in the first round of the elections. He really gathered a lot of votes in the second round, merely because a great deal of the French electorate wanted to vote against the far right candidate, Marine Le Pen. I think he didn’t have an extraordinary base. He certainly doesn’t have one now. He is really someone who’s very good at taking advantage of the circumstances and he, I think, was very clever in the way he bailed out of the French Socialist party towards the end of Francois Hollande’s disastrous presidential term. Francois Hollande, one of the most unpopular presidents in contemporary French history. Having any association with him would be a killer in any elections. Of course, Macron did have an association, as he was minister. He was a labor minister under Francois Hollande.

Gregory Wilpert: That’s something I actually just want to get to, is the question of, as a labor minster, he already proposed various labor law reforms that didn’t go through. Now he’s promising again, basically, to reissue these labor law reforms and things like that, in the national assembly. Basically a new liberal agenda. Tell us a little bit about what he did back then and what he’s planning now.

Alex Main: Well that’s really the great irony. It is these reforms that were pushed by Francois Hollande’s government and by Macron himself when he was in the government. That were extraordinarily unpopular and that led to the disastrous ratings that the Hollande government got. Yet, Macron has managed to position himself as an anti-systemic candidate and his party. It’s all a bunch of fresh candidates. Most people don’t really know who they are. I think we’re at a particular juncture in French politics and its society. Where there is a real craving for some alternative to the traditional parties. The traditional parties, of course, for the last few decades, have been some version of De Gaulle’s parties. Now it’s the Hector Rincon and the Socialist party. They are wildly unpopular at the moment.

A lot of French voters were just wanting to vote for someone who appeared to represent something very different. Someone who would break with France’s traditional politics. Obviously, a phenomenon that we’ve seen in all parts of the world, really. Certainly in the US and in western Europe. Part of the response of the electorate to the devastating economic crisis since 2008, 2009, that of course has really set in much more strongly in Europe than it has in the US.

Gregory Wilpert: Melenchon already has warned Macron not to pursue his agenda because of the low turnouts. That basically doesn’t have a mandate. As I mentioned earlier, both Macron’s predecessors, Nicolas Sarkozy and Francois Hollande, also tried to push through these neo liberal reforms. Presumably, voters might be in for a surprise once Macron tries to pursue the same agenda, for a third time basically. What do you expect to happen this time around?

Alex Main: Well he may not have much of a mandate. Melenchon certainly has a point. Really when you count up the votes that Macron’s party received in these elections, it only amounts to about 15% of registered voters in France. Yes, absolutely not much of a mandate. However, it doesn’t really matter in terms of French institutions, because he will almost certainly have a very strong majority in the French national assembly, which will allow him to push forward his agenda. He seems very keen on doing so. It’s not really the same case as Francois Hollande. When he came in, he promised, I wouldn’t say an outright anti neo liberal agenda, but he certainly promised to reverse some of the neo liberal reforms of the previous government, of the Sarkozy government. He did the opposite. He essentially deepened some of these reforms. He would have gone much further had the French not protested as strongly as they did.

I think that’s what Melenchon is counting on in this case. Obviously, nothing can be achieved in the national assembly. Melenchon’s party, in the best case scenario, will have 14 or 15 members of the parliament, out of 577. I don’t think he can do much there. I think we have seen in the past, certainly when French governments have tried to push through these reforms, very intense mobilization in the streets of France. Massive strikes and so on. I think that’s very likely to happen again. It’s really not clear how Macron will respond to that. Will he respond by just forging ahead no matter what, and perhaps relying on a lot of repression? That wouldn’t be entirely surprising. We saw some of that already occurring under the Hollande government. It could continue to occur under Macron.

It’s not clear how he’ll deal with it, but I think he will almost certainly have to deal with it, because he has been very open about the reforms he wants to carry out. Notably to render the labor market much more flexible, pension reform and so on. Maintaining the line on these austerity policies. In fact, going further than he needs to, in terms of the austerity policies that are required of France under the European Stabilization Pact. I expect we’ll see a lot of unrest. I expect he’ll want to carry forth with his reforms no matter what.

Gregory Wilpert: I just want to finally turn quickly to the issue of the French left. It looks like one of the reasons the left fared so badly was because it was quite divided. Not only do you have remnants of Hollande’s Socialist party, but Melenchon’s party, France Insoumise, refused to make any alliances with other left parties, such as the Communist, or even with his former party, the Left Party. What do you think happened? Why are they so divided?

I think the question is whether he’s going to be able to maintain it. He’s going to have only a small handful of allies in the congress. Certainly it is disappointing to see. Particularly when you take into account that in the first round of the presidential elections, it was very clear that what can be considered to be the hard left in France, the Communist party, Melenchon’s party, the France Insoumise. But also the left of the Socialist party, which is represented by Benoit Hamon. If you rounded up all those votes, it was over 25% of the electorate. In fact, if they’d had one candidate in that first round, that candidate would have been the front runner, ahead of Emmanuel Macron or Marine Le Pen. Very disappointing that we’re not seeing more unity on the left. I’m not very optimistic that it’s going to get much better any time soon. It is, I think, a wasted opportunity.

Gregory Wilpert: Okay. Well we’re going to keep an eye on the continuing developments, especially after the second round of the vote. Then what Macron plans to do. We were talking to Alex Main, senior researcher at the Center for Economic and Policy Research. Thank you for your time, Alex.

Gregory Wilpert: Thank you for watching and supporting the Real News Network.