Spies and the Media 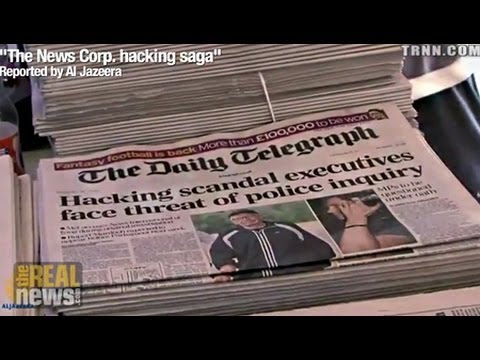 PAUL JAY, SENIOR EDITOR, TRNN: Welcome to The Real News Network. I’m Paul Jay in Baltimore. And welcome to this week’s edition of The Machon Report with Annie Machon, who now joins us from Germany.

Annie was an intelligence officer for the U.K.’s MI5 in the 1990s, but she left after blowing the whistle on incompetence and crimes of British spy agencies. She’s also a director of Law Enforcement Against Prohibition, or LEAP, in Europe. She’s a writer and political commentator.

Thanks for joining us again, Annie.

JAY: So what story have you been following recently?

MACHON: Well, this is something that’s been in the U.K. media for a while now, the intimate linkage between top politicians and media proprietors, and corrupt relations between police officers and the politicians and the media. This is leading to a big trial against a number of political and also media figures, including Rebekah Brooks, who used to be the editor of a national newspaper in the U.K. And this has resulted in a big judicial inquiry, which has produced something called the Leveson Report, investigating exactly how this corruption occurs.

And this is an area that I’ve been very interested in for many years. First of all, I come from a journalistic family anyway, and we were always brought up to believe that the press should hold power to account. Then I ended up working as an intelligence officer for MI5 in the U.K., and then ended up, after that, blowing the whistle, going public about a whole series of crimes that the U.K. intelligence agencies had committed. And this resulted in a number of trials, a number of arrests, and also massive spin in the media against the whistleblowers. So for many years now I’ve been watching stories about how spin can be managed, about how the intelligence agencies and spies can control the media.

So the Leveson Report has laid bare the connections between politics and police and the intelligence agencies. And it sort of, I think, concerns many people across the world. It’s very difficult to trust the mainstream media these days, because they know that there are these sort of mechanisms going on in the background.

However, because of my experience as a whistleblower and my experience as a researcher and a speaker since, I think I’ve got quite a good handle on exactly how those levers of control are used against the mainstream media across the West. And this is a subject that I’ve been speaking about across Europe at investigative journalism conferences. And always after these talks, the journalists will come up to me and say it’s at least as bad as you’ve been talking about.

So I’d just like to set out, really, a few key areas in the way that governments and the intelligence agencies can control the mainstream media and why we should not trust them implicitly, especially after they have allowed intelligence to be classified and that intelligence to be used and abused to take us into wars, illegal wars, in the Middle East.

JAY: Is there some evidence that what’s happened in the U.K. with the Murdoch-owned newspaper and such that that’s going to be portrayed, I guess, as if it’s an anomaly, this one situation out of control? But is there evidence that it’s actually more systematic than that?

MACHON: Very much so. I mean, virtually every newspaper in the U.K. has been implicated in abusive practices that have been revealed about the Murdoch empire and the News of the World. And the way it works is that journalists in the mainstream media now have no job security. They now rely on briefings from government or the intelligence agencies or sort of police officers or whatever to get stories, and once they get their stories, they are expected to publish them uncritically. Otherwise, they don’t get the next story and they can’t then keep their job and earn a living. So they become these sort of stooges of the spin machine.

But it can get worse, because if you are particularly pliant as a journalist in the mainstream media, then you might be asked to do more and become what is known as an agent of influence, where you then report back to the police or you report back to the government or to the spy agencies about the stories your media organization may be investigating. They were actually switching.

JAY: Right. One of the things I know from the Canadian experience when CSIS was formed, which is essentially the Canadian spy agency, there was a royal commission that led to it, and it had various recommendations. And I remember clearly that there was a specific recommendationâ€”I believe this was in the 1970s, by memoryâ€”that there actuallyâ€”that CSIS should make sure that it actually had people in the various newsrooms across the country, that it should try to have at least one paid informant in every newsroom. Have you come across things like this?

MACHON: I have indeed. I mean, there is a similar operation in the U.S. I think it was called Operation Mockingbird. But in the U.K. particularly, within MI6, which is the external intelligence gathering agency, the sort of James Bond wannabes, they have a little department which used to be called Information Operations, which [incompr.] specifically to plant stories in the media, even fake stories, in order to gain political advantage or to manipulate the spin of the story. So this happens time and time again.

So there’s a whole sort of array of soft power that spies can use against the media in order to control their media profiles. So you have people being planted with stories, you have people reporting back to the spies, you have cozy lunches and interconnections between various agencies and the media, and then you also have this department in the U.K., IOPS, which plants fake stories in order to manipulate the perception. So it goes across a whole array of different methods. That’s the sort of soft power in the U.K.

The hard powerâ€”so the carrot and the stickâ€”the stick bit is where they start using a battery of laws to protect government and spies and the military and the police. And I think the U.K. is probably the least accountable and most legally protected of all Western democracies when it comes to this. There’s a whole range of laws, starting with injunctions, super injunctions, government injunctions, libel laws, terrorist laws, whatever, that can be used against journalists trying to do their job.

But the worst one is the Official Secrets Act from 1989. And this makes it a crime for a whistleblower to report crimes committed by the spies or by the military or by governments. But it also makes it a crime for the journalists to report it. They can get two years in prison for exposing crimes up to and including murder committed by these people.

So they are very, very protected by this battery of laws, and it has a very chilling effect on democracy.

JAY: And I guess you add to that the extensive electronic surveillance now, which more or less every phone call, every email and such is being vacuumed up and looked at for key words. And they can do specific spying when they want to rather easily now. And I suppose journalists are well aware every time they pick up the phone, everything being said is no longer confidential.

MACHON: I think they’re very aware of the problem. They’re just not very aware of what they can do about it. And that’s where the intersection between the sort of hacktivist community and the journalist community are growing. So, for example, if you have some contact with a potential whistleblower coming out of the central government or the spy agencies, the pushback from those agencies potentially could be very severe, lifechanging for both the whistleblower and the journalist. And ensuring that sort of degree of safety can be very difficult.

I’ve just been involved in helping to set up in the U.K. a new organization in the U.K. called Whistleblowers U.K., and these are exactly the ideas and processes we’ve been trying to thrash out.

So it is very difficult in this surveillance society for a journalist to get a good whistleblower and to protect that whistleblower adequately. And this is why I think organizations, the methodology of organizations like WikiLeaks has been so valuable now, the idea that a whistleblower can retain a degree of control by leaking information and then deciding, do they want to go public about it, do they want to sort of turn their lives inside out by fighting the cause around this information.

But WikiLeaks have changed the playing field for most mainstream media. And I think if I were a whistleblower now sitting behind my desk at MI5, I would think long and hard about how I would do it, and I would probably attempt to go to WikiLeaks, because there would be a sense that you retain control and at least your information will get out there. A lot of the mainstream media can act as a sort of self-censoring blockage of information between those who know information that’s important and those who need to know that important information, which is the citizenry, so they can make informed decisions.

MACHON: So it’s a very difficult world now. I mean, it’s great that there’s more and more independent media, not the sort of corporatist media that so many people distrust. So The Real News Network is making a great contribution to it.

JAY: Well, thanks. And I’d like to also talk to anyone who might be listening to any of my phone calls or any of the work we’re doing at The Real News. I hope you’re not getting too bored. You’re welcome to listen in, because it’s not going to stop us. We don’t really have anything to hide. And you can actually see everything on The Real News Network anyway. Thanks very much for joining us, Annie.