Al-Zaidi: Pro-US Iraqi politicians are working with US to create conditions to extend occupation

Al-Zaidi: Pro-US Iraqi politicians are working with US to create conditions to extend occupation 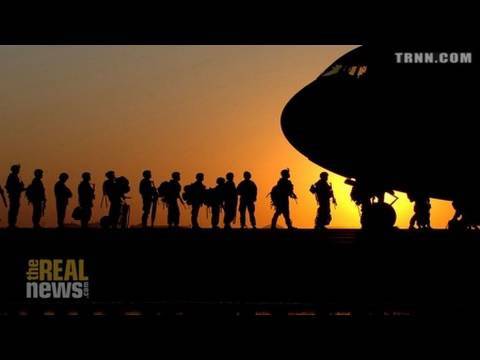 PAUL JAY, SENIOR EDITOR, TRNN: Welcome back to The Real News Network, Iï¿½m Paul Jay. Weï¿½re in Beirut. When Muntadhar al-Zaidi got out of jail in Iraq after his famous throwing of the shoe at President Bush, he had been in jail for nine months he was greeted as a hero when he left, amongst the Iraqi people. Now weï¿½re talking about the current situation. Thanks for joining us again Muntadhar.

Jay: So as you look ahead, at the results of these elections, what do you think comes next? And in terms of the American withdrawal, are Iraqis satisfied with the current withdrawal plan? Or do they want the Americans out sooner? And do they believe the Americans are really going?

AL-ZAIDI: Exactly. This is the main question: do Iraqis believe that the Americans will withdraw? Or, allow me to rephrase the question: will the Americans actually withdraw from Iraq? Until now, there has been no evidence of that. Instead there has been talk of ï¿½extending the withdrawal deadline of our troops, in case the insecurity continuesï¿½. Imagine this point. They are having discussions on governing our future: ï¿½if violence breaks out in Iraq, we will extend our deadlineï¿½. Imagine! From now they are setting the stage to formulate a pretext to stir trouble inside of Iraq, as they have already done before. On the other hand, they are applying pressure on the Iraqi politicians who came to power with Americaï¿½s blessing. In order to get the Iraqi ear accustomed to hearing "perhaps we can negotiate some sort of extension to the American occupation, even if a few regiments or some of the divisions are maintainedï¿½. What does this mean? It means it is a planned maneuver. It means there is an agreement between the different parties: America on one side, and those America brought to power on the other.

JAY: Because the politicians, Al Maliki and some others: many of them depend on American power for their own power.

JAY: What is the state of peopleï¿½s organizations in Iraq now? For example, trade unions and civil society. Are there organizations that represent the Iraqi people?

JAY: But are there mass organizations, like trade unions for example, that represent sections of the Iraqis, outside of the political class that is controlling the elections?

AL-ZAIDI: Iï¿½m sorry to say, there is nothing that represents all Iraqis. There are trade unions, farmersï¿½ unions, teachersï¿½ unions, lawyersï¿½ unions, etcï¿½ but, these unions have all been infiltrated by the political parties and government, or by the religious groups, or by nationalist parties, and other controlling parties in power in Iraq. Those parties infiltrated these unions and controlled them. Even the Iraqi Football Association, a sports league! But politics have even managed to get into the game and the politicians managed to dissolve it, and the rest is history. Therefore, nothing in Iraq is without political interference. And the Iraqi politics means American politics. Consequently, all of the Iraqi branches, and organizations, etcï¿½end up with American made hurdles, bumps and obstacles.

JAY: The Sadrist movement did much better in the elections than a lot of people had predictedï¿½the Sadrist being a much more militant opposition to the American occupationï¿½whatï¿½s the significance of their election success?

AL-ZAIDI: If you mean to ask how the Sadrist movement managed to win so many votes, it simply demonstrates that they have a popular base in the streets of Iraq. Certainly, as I told you earlier, it is the ballot box that represents who has the popular support, and who only talks in the political saloons.

JAY: If the Americans live up to the promise of getting out by the end of 2011, the way theyï¿½ve described, are Iraqis satisfied with that? Or do they want the Americans out even sooner than that?

AL-ZAIDI: The truth is that most Iraqis wish for the American troops to withdraw today, and no later. However, since the withdrawal has become a security agreement, a sort of protocol, etcï¿½most Iraqis hope that the occupation will terminate on deadline, and they do not want it to be postponed any longer.

JAY: Thank you very much for joining us.

For more information on the foundation created by Muntadhar al-Zaidi visit alzaidi.org