al-Zaidi: Under US pressure, Iraqi media covered up my torture and supporters were arrested

al-Zaidi: Under US pressure, Iraqi media covered up my torture and supporters were arrested 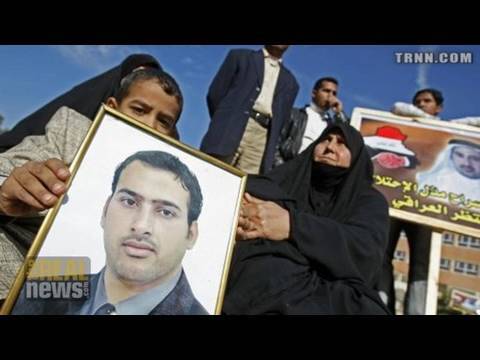 PAUL JAY, SENIOR EDITOR, TRNN: Welcome back to The Real News Network, Iï¿½m Paul Jay coming to you today from Beirut. Back again with Muntadhar Al-Zaidi. Thanks for joining us again.

JAY: So after nine months in prison, three months of torture, and six months in captivity, you get out of jail. Then what happens?

AL-ZAIDI: After my release from prison, I decided to do something else: to help my people and the Iraqi victims of the US occupation. When I was in prison I heard of the promised gifts and donations. I had decided that all of these gifts didnï¿½t belong to me, because the act didn’t merit a prize.

JAY: In the Iraqi newspapers, did it come out how badly you had been treated? Because I assume that the throwing of the shoe was very popular amongst the Iraqis.

AL-ZAIDI: Of course, considering most Iraqis are against the occupation, after what I had done people were handing out sweets in the streets, holding small parties, and the youth were applauding, chanting and waving flags. This is because it was an average Iraqi, one amongst them and not one of royalty, that was able to deliver the message to Bush. The effect was big. The torture I endured was not reported on by the media, because, unfortunately, most of the media is founded and censored by the Americans, and the factions working with the Americans. The throwing of the shoe was partly aimed at both American policy in Iraq and to the politicians working with the Americans in Iraq. And the media covered up my torture as if it was happening in a far away place. However the torture I experienced sparked protests in Iraq calling for my release, taking place in Basra, in Baghdad, in the Sunni areas, the Shiite areas, in all of Iraq. But the government suppressed the demonstrations, and arrested people, imprisoned some, and threatened others. But Iraqis remain free by rejecting the occupation. Those who protested my torture stood loyally by me.

JAY: Bush is gone, now we have President Obama. He says the troops are going to get out sometime in beginning of 2011. What do you think of the current situation?

AL-ZAIDI: The present situation is complex. And to us there is no difference between Obama and another person, the important thing is for the American troops to leave Iraq. But as Iraqis, we are a patient peopleï¿½

JAY: If you were in a press conference with President Obama, would you throw a shoe?

AL-ZAIDI: I make no distinction. Any person of any colour or religion who kills my people, is a killer of my people, regardless of whether itï¿½s Obama or Bush. I want to have faith in Obama. I hope he listens to your broadcast, and withdraws the troops within his promised deadline. I’m afraid we Iraqis lose patience in the face of an occupier and resort to an armed struggle, forcing the occupying troops to leave Iraq.

JAY: Itï¿½s often said in the American press that if and when the Americans leave, they may leave a sectarian war behind. That the different Iraqi factions will fight each other, and only the presence of the American troops keeps what they call ï¿½stability or securityï¿½. What do you make of that argument?

AL-ZAIDI: Bush claimed in 2003 that we should beware of Iraq’s Weapons of Mass Destruction in order to mobilize the world towards a warï¿½and when they entered into Iraq, they discovered it was all a lie. I also hope that the Americans begin to realize and admit to the world that it was a lie. Iraq is capable of governing itself, without any occupying power. However, those who are participating in destabilizing the security of Iraq, are the Americans, the American aid agencies, and the political parties working with them. All of which are seeking to benefit from the occupation of Iraq, a necessity for their political partyï¿½s survival. The American troops and its allies are the warlords. I describe them as wax statues: the sun of freedom cannot rise until the American troops melt away and leave. For them to maintain their solid state, they need the night of the occupation to stretch for much longer. And I don’t believe the Iraqis are gullible enough to think the troops are necessary to maintain peace and stability. And what stability? During the last six years, bomb-laden cars, and the sectarian wars have reaped the lives of thousands of Iraqis. All taking place in spite of an occupying presence!

JAY: We saw in these elections that just passed, that many of the Sunni candidates were not allowed to run in the election. That the Maliki government does not want, it seemed, to allow a full participation of many of the Sunnis. And they have this policy they call ï¿½de-Baï¿½athificationï¿½. So what people say is that this is a chemistry, a brew, for an explosionï¿½and that the Americans are creating a kind of security by being there. You think this is not true?

AL-ZAIDI: This is untrue. There is no such thing in Iraq as Sunnis being controlled or marginalized, or the Shiites being in control. What is happening is a political game: the government, including al-Maliki and others, have tried to smear the reputation of a political sector, some of which are Sunni. Those who are interested in being part of the government, in this ï¿½new Iraqï¿½, –and I believe the government is sectarian, very sectarianï¿½tried to marginalize some groups with terms as Shema’at el Ba’ath, "scapegoats". And these derogatory terms are coming primarily from the army. The Iraqi people are aware of these fraudulent elections. The Sunnis, the Shiites, the Kurds are all factions which reject the elections, and reject the American occupation. Does it mean that those not participating in the elections are in conflict with those running in the elections? Or are those running in the elections fighting among themselves? It is the latter, and among the people within the parties. Every party now has a militia, seeking vendettas, ambitionsï¿½everyone has his own interest. Any one of them who throws himself at the mercy of the Americans, feels more secure and accepted by America. As a result, he will have a high ranking position in the government. Sadly, most of the politicians who came along as a result of the occupation don’t understand the meaning of having dignity and honor. All of this talk in the media of Sunnis and Shiites wanting to kill each other are untrue. Sunnis and Shiites have for tens, hundreds, and even thousands of years been living together and intermarrying. We didn’t use to hear so and so is Sunni, or so and so is Shiite until the occupation began…and I hope the world can hear me say this. In July 2003, the occupation announced the establishment of a Governing Body which sewed the seeds of sectarianism. The Americans gave 12 seats to the Shiites, six seats to the Sunnis, and four seats to the Kurds. The remainder was gathered as an opposition government, including the Iraqi Communist Party. The secretary of the Communist Party is a Shiite, and the Americans included him in the Governing Body as a Shiite. Well, when we, the observers, asked "but aren’t you a communist? How did you enter in as a Shiite?" he replied: "the Americans counted me as one of the six Shiitesï¿½. And instead, the Americans grouped the religious men with the radical Muslims under the same umbrella. Well then, who should establish this type of governance structure? America or the Iraqi people? Before the Americans disbanded the Iraqi Army, it was an army made up of Sunnis, Shiites, Sabeis, etcï¿½After its dissolution, the army turned a blind eye to the formation of militias in every party. Could it be that if there continued to be an Iraqi Army, a mixed loyal army of 87 years, would we be in the current situation of sectarian divide? This was biggest mistake they could have committed. The Americans say "it was a mistake", but it is a planned mistake, so that Iraq remains in a spiral of instability.