In the weeks leading up to the seventeenth round of negotiations of the UNFCC in Durban, South Africa (COP17), environmentalists gathered from around the world to challenge the impasse these talks have reached in the past. Activists organized "Occupy COP17" and the Dirty Energy Week and Everyone is Downstream conferences that tackled the root of the causes of climate change - fossil fuels. As the industry is moving away from crude oil and towards dirtier forms of extracting oil sands and oil shale, much like Canada's Tar Sands in countries such as Madagascar, Uganda, Morocco, and Israel, delegates gather to share stories of the impacts similar projects have had in their countries, and what these new projects will do. The Real News' Lia Tarachansky spoke with South African government representatives, environmentalists, and delegates about COP17 and the failure to reach a globally-binding, effective agreement on lowering world emissions.

In the weeks leading up to the seventeenth round of negotiations of the UNFCC in Durban, South Africa (COP17), environmentalists gathered from around the world to challenge the impasse these talks have reached in the past. Activists organized "Occupy COP17" and the Dirty Energy Week and Everyone is Downstream conferences that tackled the root of the causes of climate change - fossil fuels. As the industry is moving away from crude oil and towards dirtier forms of extracting oil sands and oil shale, much like Canada's Tar Sands in countries such as Madagascar, Uganda, Morocco, and Israel, delegates gather to share stories of the impacts similar projects have had in their countries, and what these new projects will do. The Real News' Lia Tarachansky spoke with South African government representatives, environmentalists, and delegates about COP17 and the failure to reach a globally-binding, effective agreement on lowering world emissions. 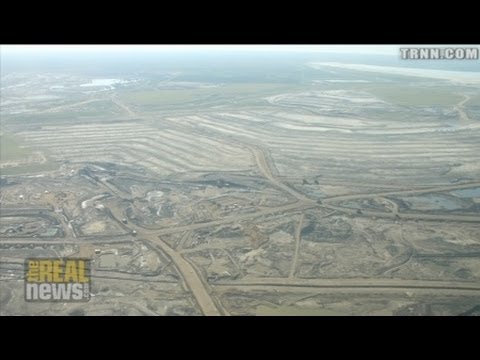 LIA TARACHANSKY, TRNN: While world delegations gather here in Durban, South Africa, for the 17th round of negotiations on lowering global emissions, many environmentalists doubt this very process can lead to real change. They have therefore organized alternative conferences and events that have been taking place here for weeks. As part of the global Occupy movement, environmentalists from throughout the African continent organized Occupy COP17 across the street from the main conference. On the first day of negotiations, rumors spread that Canada decided to abandon the Kyoto protocol, a move condemned by Archbishop Desmond Tutu, among others.

CHANTING: Down with Canada! Down! Down!

TARACHANSKY: Patrick Bond is a political economist teaching at the University of KwaZulu-Natal in Durban. He helped organize this Occupy protest.

PATRICK BOND, POLITICAL ECONIMIST, UNIVIVERSITY OF KWAZULU-NATAL: The COP17 here, we’ve all decided, given this power balance, is impossible to reform. You can’t really expect the U.S. not to sabotage it. So Washington and the World Bank, these are the guys that are really preventing progress. So that means our protests outside are going to target the 1 percent in the United Nations delegations and the whole multilateral system that’s on display here and say, yeah, this is part of what people around the world are furious about, a 1 percent destroying the planet and people using financial gimmickry like carbon markets. And all of the things Occupy has raised around the world are being discussed here by the general assembly and by all the allied organizations like the Pan African Climate Justice Alliance.

TARACHANSKY: Everyone’s Downstream is a conference that took place in the days leading up to COP17. It focused on the emergence of unconventional oil exploration, such as Canada’s tar sands. This year, the conference brought together anti-oil delegates from Nigeria, Israel, Madagascar, and Congo-Brazzaville. Macdonald Stainsby is a Canadian activist who organized the conference.

MACDONALD STAINSBY, ENVIRONMENTAL ACTIVIST, OIL SANDS TRUTH: I believe COP17 is going to be a miserable failure. I hope that it is officially a failure, because what I believe is that there’s a likelihood they will try to do the same kind of thing they did last year, which is pull a very last-minute bribery scam on some of the poorest countries that have some of the worst situations, to sort of rope them into an aid-based reliance on mechanisms that are completely false. For example, the Maldives, a country that’s disappearing under the water, who to demonstrate this a couple of years ago held a session of Parliament under the ocean in full scuba gear to show that they were disappearing as a result of climate change, decided to at the very, very 11th hour last year sign on, as a result of blackmail and pressure to have a lot of loans cut off, and have funding actually go towards them on other levels of mitigation. How you mitigate having a country become the newest Atlantis, it doesn’t really have a mitigation to it. But that blackmail procedure happened at the very end of COP16 in Cancun in order to make it appear, for countries like the United States and other of the world’s biggest–well, Canada for certain, biggest actually blocks to getting anything done around climate change, had to have something that they could put out in the newspapers and say, yes, we’re actually doing something around climate change.

TARACHANSKY: Everyone’s Downstream showed that new projects aimed at moving away from crude oil and towards oil sands and shale like Canada’s tar sands are spreading to new countries.

BEN POWLESS, INDIGENOUS ENVIRONMENTAL MOVEMENT: The extraction, the costs of extracting, the costs of using these humongous pieces of machinery, these gigantic refineries, was all too much before oil was below, say, $70 or $80 a barrel. After those prices rise, all of a sudden it becomes, you know, tremendously profitable. And so it’s really only been in the past ten years that we’ve actually seen tar sands development really take off to the pace where it’s currently at right now. When we first went back there, we thought it was a lake that the companies were dumping stuff into. It turned out to be a tailings pond. It turned out to be just a toxic pool of water that didn’t exist, probably, about, you know, a year or two ago. Before that, again, this would have been just trees, wildlife, you know, everything else that would’ve been natural in the area.

CHRISTIAN MOUNZEO, RENCONTRE POUR LA PAIX ET LES DROITS DE L’HOMME (VOICEOVER TRANSL.): The exploitation of 40 tons of petroleum resources has not led us to development, and it’s clear that when we look at the tar sands, the example we have is Canada, and it’s clear that it hasn’t produced good impacts. And so we see that we’re facing a corporation that does not care to discuss things with the community but that is collaborating with the government. And so the question we’re led to ask, then, is: should tar sands exist? Should the exploitation of oil resources from tar sands exist? Should it happen?

STAINSBY: The kind of extraction that Canada’s been engaged in on a record level in the last ten years, and the world’s largest and most destructive environmentally damaging project, is actually something that is being used as an exported form of extraction that Canada’s teaching other countries how to do. They want to use almost the exact same technologies in western parts of Madagascar and to certain parts of the Republic of Congo or Congo-Brazzaville. They’re doing similar types of extraction that are actually in some ways more dangerous in countries like Morocco, and possibly even in Israel. When we have this kind of stuff lined up and Canada being used as the model, and being an anti-tar sands activist and this being the place where activists come in from their own respective countries and communities around the world, this was an ideal place for us to be able to gather and talk about real solutions, which basically means shutting them all down rather than trying to come up with ways to offset things and what amounts to a complete hocus-pocus version of economics, as well as environmental policy.

BWENGYE RAJABU YUSUF, OIL WATCH UGANDA: These are the animals in Murchison Falls National Park. This you see here is the rig, oil rig of Heritage Oil, Heritage and Tullow oils in Murchison Falls National Park. These are animals just looking at the rig sites. The truth of the matter is that mining in protected areas, according to the Ugandan laws, is not allowed. But because the oil companies connive with the government, they are in secret deals, they are doing it.

TARACHANSKY: Meanwhile, at the COP17, the South African government invited green energy companies, with the approach that green jobs and investment can solve the crime climate crisis. Zakhele Mdlalose is the director of environment for the Department of Trade and Industry.

ZAKHELE MDLALOSE, ENVIRONMENT DIRECTOR, SOUTH AFRICAN DEPARTMENT OF TRADE AND INDUSTRY: We are even doing the training at the broader areas for energy practitioners. Our main focus, as the dti, is around looking at bringing in investment and promoting trade.

TARACHANSKY: So basically your solution to some of the climate-change crisis problems is through technology.

MDLALOSE: Through technology, through financing that technology that is going to enable the green industry to be a reality.

TARACHANSKY: But a lot of people have argued that the problems behind why COP17 and 16 and 15 haven’t produced any kind of binding agreement on a global scale is not because of technologies but because of politics.

MDLALOSE: Around having the binding commitment on our side, we are looking at ensuring that what is nationally appropriate that we can do.

TARACHANSKY: This position was echoed by other government representatives. Jomo Sibiya is the regional chairman of the ruling ANC party, representing the youth league, its upcoming leadership.

JOMO SIBIYA, DURBAN REGIONAL CHAIRMAN, ANC-YL: The collapse of capitalist system, it’s an indication that the wealth is changing and we can never go back. Having the rise of China, India, Brazil, South Africa, Russia, again, it’s an indication that the world is changing. We want to be part of the new influence that is taking place in the world, and we want to become a key role player in terms of the key decision-making that are happening in the world.

TARACHANSKY: For the rate of growth that the South African government is aiming towards, you can’t really invest, you can’t really build that on green energy, which explains the opening of new coal mines, etc.

SIBIYA: No, it is through. South Africa is taking a keen interest in clean energy. Recently our minister has made a commitment in investing on clean energy. But one problem in particular here in Africa when it comes to clean energy, you expect countries that are leading economically, like England, Britain, to take a lead in clean energy, but they are not doing so, which becomes a serious problem in terms of African countries and other developing countries, because clean energy’s still very expensive. It’s underdeveloped. As emerging countries, we just hope this COP17 will just be another step forward.

RAJABU YUSUF: The challenge is that the biggest polluters are not committing themselves to anything.

TARACHANSKY: And yet you’re participating in the UNFCC.

RAJABU YUSUF: Because you feel, really–for example, where I come from, I feel, as you realize, the communities there might even not be knowing what is happening here. So unless I come out and say, look, this is an issue in Uganda that seems to be silenced by disaffecting 6 million people, they would be robbing them.