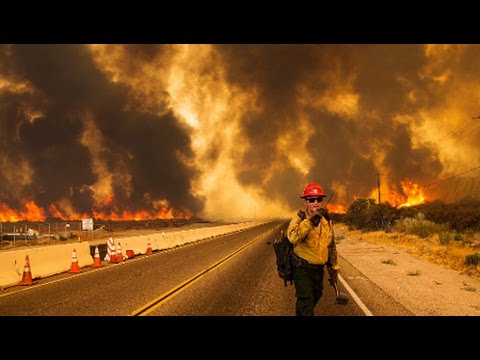 It’s being called the Blue Cut wildfire, and within only two days has already burned through 40 square miles in San Bernardino County in California. Veteran firefighters have said that they’ve never seen a fire burn with such intensity. 82,000 people are being forced to evacuate, and so far this summer, fire season in California has killed at least eight people and destroyed hundreds of homes.

Experts say that climate change is fueling the ferocity of these fires, and joining us today to discuss is Dr. Alyson Kenward. She is the vice president for creative production at Climate Central. Her research interests include the connection between climate change and wildfires, as well as the potential for clean energy technologies, including wind and solar power, as she joins us today from Boston. Dr. Kenward, good day.

BROWN: Doctor, before we get to these most recent wildfires, let’s first talk about the natural role that wildfires play in the ecosystem in the Western United States. Because there is such thing as a brushfire season that’s an annual occurrence. But what we see with the Blue Cut fire and Erksine fires is definitely more extreme.

KENWARD: Right. So fires, wildfires are a natural part of the ecosystem in the Western U.S., as you point out. You know, they can come in and they can clean out all the brush and make the conditions great for new trees and brush to grow up.

But what we’ve seen over the last several decades across the West are fires that, you know, of the size and the number that we haven’t seen in some decades or centuries. It’s really taking off. And we’ve looked at how wildfires have changed in the Western U.S. since the 1970s. We’re seeing on average more big fires now than we were several decades ago.

BROWN: Doctor, there seems to be a perfect storm out West of drought conditions, of earlier show melts. Millions of dead trees, more windy conditions. Explain how these things come together to become what’s being seen right now.

So what our research has looked at over the last several decades are how have the baseline climate conditions been changing that really prime the trees and the brush in the Western U.S. to be more flammable? So if there is an ignition and the weather is conducive to fire, that those fires do start and they spread really rapidly. We are seeing a lot more heat in the spring and summer now than in every year that we did in the 1970s. Every year there’s more precipitation in the winter that’s falling as rain instead of snow. So the snow isn’t really there to melt slowly through the spring to keep the ground moist. And on top of that, springs are warming sooner, so whatever snow pack there is, it’s melting faster. So by the time you get to August-September, everything is really tinder-dry and really much more likely to burn. And this is all, you know, exactly what we expect in a warming world. Hotter seasons, more precipitation falling as rain instead of snow, and snow melting earlier. And they’re all leading to this perfect condition for a fire.

BROWN: Dr. Kenward, does the El Nino-La Nina weather patterns play any role in the intensity of the forest fires and the wildfires we’ve been seeing out West in recent years?

Our research has shown the years with hotter spring and summer temperatures absolutely tend to be the years with more big wildfires. But I also want to say that it’s important to look at the long-term trends beyond just the year-over-year variation since the 1970s, across the Western U.S., and including in a state like California, on average there are more big fires now than there were.

BROWN: The Yale School of Forestry and Environmental Studies published a report in the journal Climate Change recently, and they predict by the year 2050 the Western United States will experience not only more wildfires, but they will start earlier in the year, like you said, and they will emit more pollutants, some of which can travel hundreds of miles away from the fire and potentially cause lung problems for anyone who breathes in these tiny particulates of soot and ash.

Doctor, in your opinion is there anything from a policy perspective the U.S. government can do to try to ameliorate this situation?

KENWARD: Well, certainly it’s the case that, you know, as you started off at the top, wildfires are a natural part of the landscape in the West. The issue really becomes where we’ve altered the natural order of things, as is happening with climate change, and we’ve also got more people in harm’s way. So there’s more people building structures where wildfires are prone to burn, which means they’re costlier, there have to be mass evacuations to get people out of harm’s way. And yes, there’s also a health consideration with the pollution and the particulates that come with these large fires.

So there’s a lot that’s coming together. In terms of looking at the long-term risks of wildfires it’s important to consider these long-term trends. Not only what we’ve seen, but you’re right, what the projections show for more big fires. And some of that stemming from hotter temperatures. We need to think about what the greenhouse gas emissions impacts are at play, and how much we can moderate the continued rise of temperature if greenhouse gas emissions are reduced.

BROWN: That’s Dr. Alyson Kenward. She is the vice president for creative production at Climate Central. Her research interests include the connection between climate change and wildfires, as well as the potential for clean energy technologies, including wind and solar power. Doctor, we appreciate your time today.

KENWARD: Thanks for having me.

BROWN: Thanks for watching the Real News Network.

Alyson Kenward is the Vice President for Creative Production at Climate Central. Her research interests include the connection between climate change and wildfires, as well as the potential of clean-energy technologies, including wind and solar power. She was an invited delegate to the British Council’s 2010 ‘Climate 4 Media’ workshop held in Shanghai. In 2009…