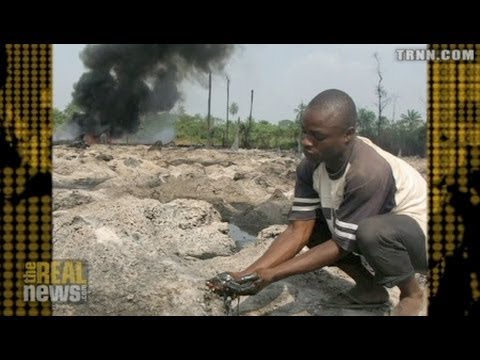 And now joining us to explain why is Antonia Juhasz. Antonia is an oil and energy analyst and author and journalist. She’s the editor of free alternative annual reports for Chevron and the author of three books on the oil industry, including, most recently, Black Tide: The Devastating Impact of the Gulf Oil Spill. And she now joins us from San Francisco. Thanks for joining us again, Antonia.

ANTONIA JUHASZ, AUTHOR AND JOURNALIST: Thanks for having me.

JAY: So why is the network organizing? What was the point?

JUHASZ: So this is the True Cost of Chevron network. It’s an increasingly growing network of communities from all across the United States, all around the world, who have been harmed by Chevron and Chevron’s operations. And at this year’s annual shareholder meeting of Chevron, there were members of this network representing communities harmed by Chevron who went into the meeting, members who were denied access to the meeting even though they have legal proxies, and a support of about 150 protesters outside of the meeting who were also part of the Occupy movement, the 99 percent spring. So it was a big, an impactful day.

JAY: And a lot of international participants. What are some of the countries that were represented there?

JUHASZ: So going into the meeting, there were communities thatâ€”representatives of communities that had traveled all the way from Angola, Nigeria, from Brazil, from Ecuador. And it was critical that they went inside of the meeting, because what took place inside the shareholder meeting was CEO John Watson, who is the head of one of the largest, most wealthiest, most powerful corporations in the world, who I believe committed fraud within that meeting, he absolutely lied to his shareholders, misrepresented his company and its risks, and denied access to one of the most critical voices that could have responded to those lies.

JAY: Okay. So, just before I ask you for examples, we are going to contact Chevron and ask Chevronâ€”Chevron’s CEO or a representative of Chevronâ€”to come on and to respond to what you’re about to say. So they will have their chance if they want. But what are examples of what you’re calling fraud or lies?

JUHASZ: CEO John Watson did not mention the word Brazil in his presentation to the shareholders. The word was not mentioned until I mentioned it during the comment period, when shareholders, which I am, can talk. And the reason why that is an act of fraud and misrepresentation about the status of the company is that Chevron faces a potential $22 billion liability in Brazil. These are potential members that the government of Brazil has put out for two offshore oil spills in that country. And he didn’t even mention the spills, much less the potential liability.

In addition, he denied access to the coordinator of the largest oil workers union in Brazil, who had traveled all the way from Brazil to California to team up with the United Steelworkers here that represent oil workers in the United States to present a resolution on increased safety at Chevron’s global operations.

JAY: The reason you’re calling this fraud is that if you’re addressing your shareholders, you’re supposed to tell them about potential liabilities, especially if it’s a multibillion-dollar lawsuit.

JUHASZ: Especially a $22 billion law suit. And in addition, the union has sued to get all of Chevron’s oil and gas contracts canceled in Brazil because of their concern about Chevron’s ability to do its operations. So the threat that it might lose access to this enormous source of oil and gas is also something that certainly Chevron shareholders should have been made aware of. They denied access to the gentleman who could speak to this. That also denied the shareholders the ability to hear from one of the most critical voices to know the most about what had happened in Brazil when they considered this vital resolution on increased safety of Chevron’s operations.

Chevron’s CEO also essentially blew off what happened to it in Nigeria, to the company in Nigeria this year as a little gas accident that didn’t matter. Well, that was a massive underwater gas explosion that led to a fire that burned for three monthsâ€”and, as I pointed out to him because he seemed not to care, also killed his employees in the process of the explosion. And it also killed wildlife, sealife, and severely harmed the livelihoods of the people who depend on it. And he failed to mention the fact that the government of Nigeria is threatening a $3 billion potential liability there.

Finally, in the Ecuador situation, where the company faces an actual $18 billion judgment, the CEO essentially made it appear as though this is a trivial concern, doesn’t have merit, it’ll just blow over. Well, he’s been saying that for a very long time, and at this point, the judge in Ecuador has ruled that the company owes $18 billion.

So all of those are instances of fraud. And thank goodness that what we had done was made sure that the people who are actually from those communities could actually be in that room to speak the truth to the shareholders, to CEO, and to the public outside.

JAY: And what kind of reaction did you get from ordinary shareholders, if there were any there?

JUHASZ: I believe the shareholders have increasinglyâ€”because this is the third year that this whole group has been present, but it’s been many, many years of people coming from Ecuador, from Nigeria to represent their concerns, has built into a crescendo of concern among the shareholders, such that this year there were 11 key resolutions presented by shareholders to address many of these concerns, including several of them addressed at the situation in Ecuador, the ongoing litigation there, the one that I mentioned on increased safety of Chevron’s operations. You know, all of these resolutions are a result of shareholders being very concerned at the operations of the company. And whether or not the resolutions come to pass, it’s also a part of the pressure that raises awareness about the harm of the company and the risks about its operations that then results in the public being concerned, putting pressure on governments. And then the governments are increasingly taking action, which is how we end up with a potential $3 billion judgment in Nigeria, a $22 billion potential judgment in Brazil. You know, these are governments actually taking action. And I don’t think that’s random. I think that’s a result of a lot of organizing, a lot of activity.

JAY: Right. Now, when you’ve been involved in writing alternative annual reports, what does that mean? What’s different about your annual report for Chevron?

JUHASZ: So I’ve edited three alternative annual reports for Chevron, and what we do is we tell the truth about Chevron’s operations from the voices of the people who actually live where the oil is produced, where the oil is refined into gasoline, where it’s explored for. And they write and they state, this is what it actually is like to live near these operations, this is what it means to our communities, to our workers’ safety, to our health. And it gets away from the spin which Chevron puts into its annual report, which is basically just a glossy display of how things would be if oil was a clean, happy, safe enterprise. I think we all know that isn’t the case, but rarely do we actually get to read in-depth critical analyses. You know, we have 500 endnotes in our reports that’s heavily documented about, you know, what Chevron’s operations truly are [crosstalk]

JAY: And we’ll be able to give links for peopleâ€”this is available on the internet, the reports?

JUHASZ: We have a website called TrueCostOfChevron.com where all this is available.

JAY: Okay. Just finally, we would have liked to have had some video of what took place at the shareholders meeting, but we don’t, and, Antonia, you, I guess, can tell us why.

JUHASZ: Yeah. To enter a Chevron shareholder meeting, not only can you not bring a camera or a cell phone or anything like that, but you have to pass through a metal detector. And if you set off the metal detector, you are frisked and patted down. I had my pen looked at and analyzed to make sure my pen wasn’t a camera, I believe. And of all the weapons you’re not allowed to have, a member of United Steelworkers did get into the shareholder meeting, even though his brother from Brazil wasn’t allowed in, and he had his statement, his prepared piece of paper confiscated, so that he couldn’t come in with prepared comments to talk about trying to increase the safety of this company. So not only do I not have video footage for you, not only could I not tweet from the meeting, but he couldn’t even read his statement.

JAY: Well, I guess paper cuts could be a serious weapon. So, at any rate, stay tuned. You will see, in following segments, interviews with representatives from some of the countries Antonia just mentioned. Thanks very much for joining us, Antonia.

JUHASZ: Thank you for having me.

TEXT ON SCREEN: Chevron sent the following statement about the Ecuador case to The Real News:

Chevron has uncovered undeniable evidence of fraud by the Lago Agrio plaintiffs. . . . Chevron has exposed the plaintiffs’ lawyers’ plot to intimidate judges, pressure scientific experts to "find contamination" where none existed, and ghostwrite supposedly independent damage reports as well as the ultimate $18 billion judgment itself. . . . U.S. federal courts, reviewing the same evidence, concluded that: "the concept of fraud is universal, and that what has blatantly occurred in this matter would in fact be considered fraud by any court."

Chevron has tried every possible way to wiggle its way out of the overwhelming proof of its guilt for environmental crimes in Ecuador, but it has failed repeatedly.

Chevron has been given an exhaustive hearing of the evidence over many years in Ecuador, and it has been found guilty.

Antonia Juhasz is a leading energy analyst, author, and investigative journalist specializing in oil. An award-winning writer, her articles appear in Newsweek, Rolling Stone, Harper’s Magazine, The Atlantic, CNN.com among others. Juhasz is the author of three books: Black Tide (2011), The Tyranny of Oil (2008), and The Bush Agenda (2006).