The Untold Story of America’s War in Afghanistan Pt.3

Part three of our discussion with journalist Ann Jones on her new book: "How the Wounded Return from America's Wars - The Untold Story"

Part three of our discussion with journalist Ann Jones on her new book: "How the Wounded Return from America's Wars - The Untold Story"

The Untold Story of American Soldiers Wounded in Afghanistan 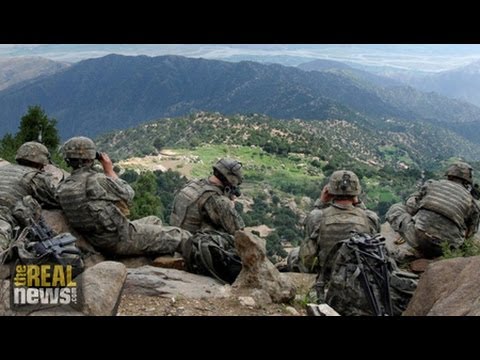 This is the third part of our Veterans Day special. We’ve been speaking with journalist Ann Jones. She’s the author of the just-released book They Were Soldiers: How the Wounded Return from the Americas Wars–The Untold Story.

So, Ann, we’ve covered a range of issues in the first two parts of our conversation. But I wanted to specifically talk to you about the growing–and you could describe it as rampant prescription drug use, both among veterans as well as active-duty soldiers. You note how just recently one-third of all active duty soldiers were on some prescription medication.

ANN JONES, JOURNALIST, PHOTOJOURNALIST, AUTHOR: Yes. And many are on multiple prescriptions for all kinds of things, from anxiety to sleep disorders and you name it. But the particularly dangerous ones are turning out to be the painkillers.

And the soldiers who are in the infantry and in combat have pain all the time just because of all the stuff they have to carry. They’re walking around in very difficult terrain, carrying packs that weigh at least 80 pounds. Add a water to supply to that and you’re packing in something that would be better carried by a mule.

So everybody is in pain, and the doctors dole out the painkillers, courtesy of the big pharma organizations, which have been–or corporations which have been pushing painkillers even before 2001. They’ve worked very hard to get pain medication established as routine, absolutely routine in VA hospitals all across the country, and also in the dispensing capacity of the military doctors on military bases. And what they’re dispensing are these opioid painkillers that were originally advertised as having no side effects, perfectly harmless. They just give you pain relief for whatever kind of paid you may be feeling.

Well, of course, they have proved, when research was actually done on them, to be highly addictive and highly implicated in the dramatic increase in soldier suicides. This is under investigation, has been for more than a year by the Senate Finance Committee, and probably by other committees within the Congress. The Food and Drug Administration is investigating it. They had wanted to put much tighter controls on these products when they were first introduced.

But the big pharma industry has been so good in setting up front organizations composed of doctors and psychiatrists who testify, who teach in medical schools, who give evidence to Congress and so on to the dramatic effectiveness of these harmless medications–and, of course, the salaries of the testifying doctors are all being paid for by the big pharma organizations themselves.

This should be a major scandal, because there can be no doubt that it’s killing soldiers on active duty and that it’s killing veterans. But it’s not a scandal. It’s under investigation. And because it’s under investigation, nobody will talk about it. Most of the evidence that we have has been shown up through studies done by the Austin American-Statesman newspaper into the effects of these drugs on veterans from Texas. But nationwide, we have very little evidence about how these drugs are used with our soldiers and veterans and what it’s doing to them.

JONES: Well, often they’re very misled about what they’re getting. And they’re told that they’re–they’re usually given a cocktail if they present with the usual stresses of combat, what–for simple PTSD or hypervigilance and all of those symptoms. If they find it difficult when they come home to reintegrate with their family or get used to being back in civilian life, they’ll be given a cocktail that consists of pills that they’re told are going to just help them calm down and sleep and get over their anxiety.

But often the drugs that are contained in that cocktail are actually very heavy-duty antipsychotic drugs, and they serve to absolutely dumb down the veterans. And I’ve talked to many veterans who tell me that they’ve put on 40 or 50 pounds in a very short time and walked around like a zombie until their family members just insisted something had to change and helped to rescue them from this drug addiction. But they get trapped in it. And they’re told by the prescribing physicians that if they just keep at it, this is going to help them reintegrate. Well, it doesn’t work out that way, and it contributes to their–I think, to their suicidality in a great many cases. So they’re not happy about that treatment.

The other effect, of course–and it’s a very important one–is it shuts them up. Many veterans describe themselves as having been reduced to the level of a zombie by taking these medications. And yes, it helped them get through the day. It helped them keep from exploding and perhaps doing some damage to their loved ones or to others. That, they say, is in a way helpful, but it doesn’t help them connect with people or get back into life, and it certainly prevents them from talking about what they’ve experienced and even what they’re experiencing in their treatment. And that, of course, is what enables the whole country to proceed in the way we are, just ignoring what happens to soldiers and what happens to what once was our more democratic society, when we just shut up the veterans so they can’t tell us what we do not want to know anyway.

NOOR: Ann Jones, thank you so much for joining us.

JONES: Thank you so much. It was my pleasure.

NOOR: You can go to TheRealNews.com for the extended three-part special conversation on Veterans Day with Ann Jones. Her new book is They Were Soldiers: How the Wounded Return from America’s Wars–The Untold Story. You can follow us on Twitter @therealnews, and you can Tweet me questions, comments, story ideas @jaisalnoor.