Adam Hudson: Despite potential closing of Gitmo prison, the culture of indefinite detention is institutionalized in the military

Adam Hudson: Despite potential closing of Gitmo prison, the culture of indefinite detention is institutionalized in the military 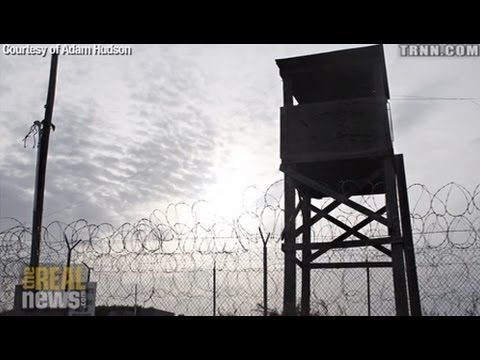 President Obama gave his counterterrorism speech on May 27. In that speech, the president talked about closing Guantanamo Bay, a promise that he made in his first administration.

Our guest today is Adam Hudson, who spent two weeks at Guantanamo Bay covering the military commissions for Truthout. Adam is a freelance journalist, writer, and photographer. He covers war and peace issues, human rights, the Middle East, and North Africa, and institutional racism. His work has appeared in The Nation, Truthout, and AlterNet. And he’s a Stanford graduate in international relations and Arabic.

Thank you for joining us, Adam.

DESVARIEUX: So, Adam, my first question is: what exactly is a military commission, if you could just get our audience up to speed? And how is that different from a civilian trial?

There’s a lot of ways in which they’re different from federal courts, but one of the specific ways is that they’re tasked with prosecuting war crimes. And they’re ultimately the military’s form of justice. And the reason why they’re being tried–why they’re at Guantanamo Bay is to try suspected terrorists in this global war on terror. The Bush administration, and even the Obama administration, has designated people like Khalid Sheikh Mohammed and the people detained at Guantanamo Bay as enemy combatants or enemy belligerents in armed hostilities against the United States. So that’s pretty much why these men are being tried in military commissions, and that’s pretty much what military commissions are.

DESVARIEUX: So you were there on the ground for two weeks, as I mentioned. What sort of issues did you see come up during these commissions?

HUDSON: Yeah. I saw a large number of issues. One issue that kept coming up is–so there are two commissions, one for Abd al-Rahim al-Nashiri, who is alleged to have masterminded the plot in 2000 on the USS Cole bombing off the coast of Yemen, which killed 17 American sailors. He was rendered and tortured in CIA black sites. But the thing is is whenever I asked the defense attorney, Richard Kammen, about how he was treated, he couldn’t go into that because that was classified information. Pretty much how he was treated before he was at Guantanamo Bay is all classified, even though that there’s plenty of public information out there to show that he was waterboarded and indeed tortured. The same for the five men, including Khalid Sheikh Mohammed, who are alleged to have masterminded the terrorist attacks of 9/11. There is public information to show that these men have been tortured, particularly Khalid Sheikh Mohammed. He’s been waterboarded in March 2003 a number of 183 times, saying all sorts of crazy stuff. Ninety percent of what he said was, you know, basically false, just essentially showing how stupid the Americans were, because he was, you know, trying to show off how much of a master torture resistor he was. But, anyway, you couldn’t talk about that. The defense attorneys couldn’t talk about it. Normally in a federal court that would be an issue that would be brought up. The defense attorney would say, look, my client was tortured. We need to treat him differently or at least lower his sentence. But in this situation, at these military commissions at Guantanamo Bay, the defense attorneys are prohibited from discussing how their clients have been treated under U.S. custody. So that was one thing that came up a lot.

Another issue was the right of confrontation. Under the Sixth Amendment of the U.S. Constitution, defendants are allowed to confront witnesses who testify them in court. This came up in the case of al-Nashiri. The government was bringing forward a witness, Fahd al-Quso, to testify or use his testimony against al-Nashiri. Now, there’s something about al-Quso. He’s dead. He was killed last year by U.S. drone strike. So the U.S. government is using him as a witness in a commission he can’t possibly come to because he’s dead, but they’re still going to use his testimony. And his defense attorney was saying, look, my client can’t even confront this person because they’re dead. So what right do you have to bring them forward and use their testimony in this commission?

DESVARIEUX: Okay. And I wanted to ask you, since you were on the ground, if you were able to speak to people about how the progress of closing Guantanamo is going. Did you pick up on anything? Did you speak to anyone about this?

HUDSON: My sense is, from the people I talked to, it seems pretty mixed. For the most part I think what you have to realize is that the soldiers at Guantanamo, they’re soldiers. Their task is not to run a prison. And, you know, soldiers are trained to fight wars, not run prisons. And so some of the grunts are just, like, you know, I have to do what I have to do and listen to my superiors. But, you know, they didn’t seem too keen on running a prison, particularly in the southeastern edge of Cuba, where it’s incredibly hot and humid, particularly in June.

But I think when you went higher up, talking to spokesmen and particularly the chief prosecutor, Mark Martins–he’s a U.S. Army Brigadier General–I think the further the top you go up the military chain of command, the sense I got is that overall the sense–the issue of indefinite detention is not really going to change. But the guys more at the top, they seem to think it’s a good idea. In their mind, these guys are among the worst of the worst. We cannot bring them in a federal court. We have to keep them here indefinitely because they’re engaged in armed hostilities against the United States. So in their mind indefinite detention is a good idea.

DESVARIEUX: So if I’m hearing you correctly, Adam, it’s essentially, even if we close Guantanamo, it doesn’t mean that the idea of indefinite detention will end. It will still be institutionalized within our military.

HUDSON: Exactly. Yeah. And the reason–the whole big picture of this is that people in the military and higher up in the Obama administration have embraced this idea, which was started, you know, largely under George W. Bush after 9/11 is that we are in a war against al-Qaeda, the Taliban, and what the Obama administration added, associated forces–essentially, any co-belligerent with al-Qaeda or the Taliban. If they happen to share, like, a similar ideology and just happen to be a co-belligerent in armed hostilities against the United States, then we’re at war with them.

And when you embrace that kind of idea, that sort of war has no definitive end to it. It’s not like you’re fighting against a state and their army and you can at least sort of have an idea of when that war is going to end. With–this idea that they’re embracing is neverending. So the people detained at Guantanamo Bay, think of them as this: they’re basically prisoners of war in a perpetual war which is indefinite, hence indefinite detention. When the chief prosecutor, Mark Martins, he said out of all the 166 detainees, about 20 could conceivably be prosecuted; the rest are being held until the end of hostilities. And he presented it in a way that it was a good idea. So, yeah, the issue of indefinite detention for the most part has been very much institutionalized within the military and national security state. So, no, I don’t see it ending any time soon.

DESVARIEUX: Well, thank you for joining us, Adam.

Adam Hudson is a journalist, writer, and photographer based in the San Francisco Bay Area. A graduate of Stanford University and a former intern at The Nation magazine, Hudson covers war and peace issues, drone warfare and technology, international relations, Middle Eastern/North African (MENA) affairs, human rights, and institutional racism. He is Truthout's special human…