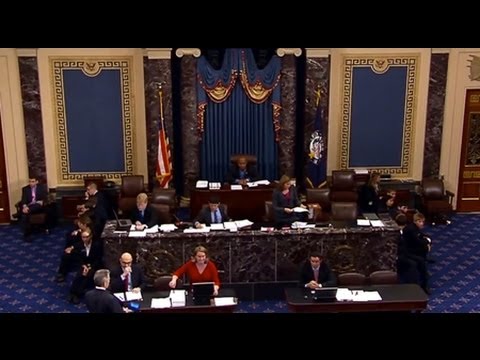 On Tuesday, the Senate voted to begin debate on its version of the comprehensive immigration reform bill currently before Congress. Now joining us to discuss this bill is Professor Alfonso Gonzales. He’s at Lehman College at the City University of New York and the author of the upcoming book Reform without Justice: Latino Migrant Politics and the Homeland Security State.

Thank you for joining us, Professor Gonzales.

GONZALES: What the Border Security, Economic Opportunity, and Immigration Modernization Act, or S 744, is trying to do is trying to do what the last five or six immigration reform proposals have sought to do since 2000, and that’s secure a temporary, independent, a temporary and flexible, meaning highly exploitable labor force that can come in and serve the interests of capital but at the same time not give these folks [snip] temporary status, essentially what you’re doing is you’re securing cheap labor but preventing those in these different types of temporary status from having the same rights as U.S. citizens. And that makes these workers extra exploitable, super exploitable, or what academics like to say, like to call it turns these undocumented workers into–they already are flexible workers, but it secures a stable, flexible labor force over the long run.

GONZALES: Well, there’s many important things to recognize here. Obviously, this is a bill that a lot of us are critical of. And if someone’s undocumented, they face the fear of deportation every day. They face the possibility of going out to get a gallon of milk for their kids and not coming back if the police stop them with all the enforcement stuff in place.

So what this bill’s going to do: it’s going to give undocumented people registered provisional immigration status, RPI status. And RPI status is a temporary status for people who have no history with the law. Basically you have to have almost a perfect record to qualify for the RPI status. And if you qualify for RPI status, you’re basically going to be in a temporary status for ten years. So I can understand if someone’s undocumented how this is an important step forward, because it prevents them from being deported in the short run. Okay?

So that’s the best thing about this bill and the worst thing at the same time, because it’s not–I mean, it’s good because it prevents people from getting deported, but over the long run this RPI status is linked to border militarization. In fact, this is the first time that we’ve seen an immigration reform bill that makes the legalization process, the path towards getting a green card–from green card to citizenship status, it makes that dependent on the border being secured. And this concept of the border being secured is such a subjective concept that we’re in a situation where the DHS and, depending on what amendments go through, possibly border civil society groups that can be anti-immigrant, governors such as Jan Brewer [incompr.] of governors from the border states, it might be up to them to say when the border’s secure. So when you allow border security to be defined by such subjective forces and you link legalization to border security, essentially what you’re doing is [incompr.] people in a temporary status for a very long time. And that is one of the most problematic aspects of this bill.

So the bill has a lot of problems. And, you know, we have to look at this bill and say not everyone’s going to qualify for RPI status. I mean, we’re–just right now with DACA, Deferred Action for Childhood Arrivals, I know a lot of young people who haven’t qualified for DACA or a lot of folks that didn’t qualify for really mundane things, like their–some of their paperwork not being–not necessarily having the same–a discrepancy in the paperwork. You know, maybe they have a certain birthday on their birth certificate in Mexico, they came over here and they applied for a green card and were rejected and there is a discrepancy on the birth date on the birth certificate in Mexico and the birth certificate here–they don’t qualify. I’ve had students who’ve been beat up and falsely arrested by the NYPD because of the criminal record–this wrongful criminal record that was imposed on them through police abuse. They don’t qualify for DACA. Or it’s students that turn 31 that don’t qualify for DACA.

NOOR: So, Professor Gonzales, you’ve mentioned how many young people will not be included in this bill, will not benefit from it, yet it’s been the work of DREAM activists and another young activists that have–many have argued have led to the point where this bill is now being pushed forward in Congress.

GONZALES: Absolutely. Let’s get one thing straight. If it wasn’t for the immigrant rights social movement that developed over the last ten years, we wouldn’t even have this bill. As problematic as this bill is, we would not have this bill.

To understand the contemporary immigrant rights movement, we have to go to 2005, when the 109th Congress proposed HR 4437, the Sensenbrenner bill. And the Sensenbrenner bill was going to turn 11 million people into felons, and it was going to–it was basically going to be the worst immigration reform bill proposed in 100 years. And HR 4437 passed in the House of Representatives, and the Democrats were on the defensive trying to defeat HR 4437.

Now our demands have been watered down. And the watering down of these demands has resulted in something like this bill that we have in the Senate today, S 744, which, although it would give contemporary legal relief in the long run, it’s not going to dismantle the structures of state violence that have resulted in the deportation of at least 2 million people.

NOOR: Professor Gonzales, what would a just immigration reform bill look like in your opinion?

A just immigration reform bill would actually result in a changing U.S. foreign-policy, because that’s really the real issue here, folks. We’ve got to see the mass migration of people from Latin America and the Caribbean to the United States as a direct product of the neoliberal economic policies that these countries adopted at the suggestion of the World Bank and the IMF under the so-called Washington consensus, which promoted the adoption of these policies throughout Latin America, the Caribbean, and the rest of the developing world. It’s those policies that have led to the mass displacement of people from the developing world, from the Global South to the United States.

And these current immigration reform bills, they don’t get to the heart of the matter. In fact, they assume that all we need to do is give people temporary status, turn them into guest workers, and build a border fence, that that’s going to resolve the contradictions of globalization and migration. It’s not, folks. What we have in front of us here with S 744 is a state-managed migration, where the state can bring people in as temporary workers and kick them out as soon as they’re no longer needed. And that is an undemocratic process.

Historically this country has always wanted to have cheap flexible labor, a racialized labor force that they can treat different than the rest of the labor force but not give them the same rights of the majority of Americans. That is the ghost that haunts American political history, and this is something that we need to get over. And it’s not going to be done simply through an immigration reform bill. That’s going to take a mass movement of immigrants, of working-class people, especially people of color, to begin to question these historical policies, this historic tendency in this country to reduce people to simply workers and not giving them their rights as human beings.

NOOR: Alfonso Gonzales, thank you for joining us.