Rousseff was ousted to shift economic policy towards neoliberalism, and now Temer is rewarding the banks and financial investors for backing the legislative coup, says SOAS Professor Alfredo Saad-Filho

Rousseff was ousted to shift economic policy towards neoliberalism, and now Temer is rewarding the banks and financial investors for backing the legislative coup, says SOAS Professor Alfredo Saad-Filho 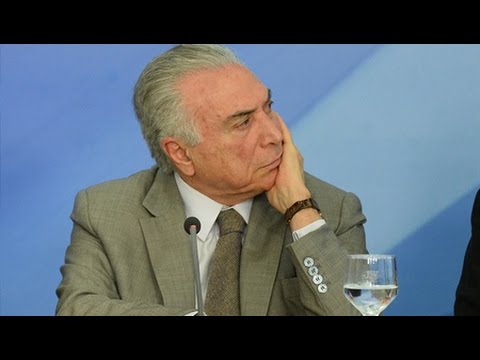 SHARMINI PERIES: It’s The Real News Network. I’m Sharmini Peries, coming to you from Baltimore. On Thursday, Brazil’s President, Michel Temer, signed a constitutional amendment that will limit fiscal spending over the next 20 years. The measure is highly controversial and has sparked protests throughout the country over the last few weeks. Critics say that the amendment commits Brazil to austerity for the next 20 years by limiting spending regardless of population or GDP growth. Spending increases are only connected to inflation growth. According to a recent poll, only 24% of the population supported and 60% are opposed to it. Many also view President Temer as being illegitimate since he came into office through a legislative coup. That was when Workers Party President Dilma Rousseff was ousted on accusations of having committed administrative irregularities.

Joining us now from London to discuss this is Alfredo Saad-Filho. Alfredo is a Professor of Political Economy at the School of Oriental and African Studies, the University of London, and was a Senior Economic Affairs Officer at the United Nations Conference on Trade and Development. Alfredo, thank you so much for joining us today.

ALFREDO SAAD-FILHO: Thank you very much for having me.

SHARMINI PERIES: Alfredo, let’s start by giving us some detail of the constitutional amendment that Brazil is now implementing, that’s been approved after being afloat for a few weeks now. What will it do?

ALFREDO SAAD-FILHO: This constitutional amendment, as you explained in your introduction, limits government spending in all areas by the Federal Executive, by the Legislature and the judicial system to spending this current year plus the rate of inflation for the next 20 years. This is what it is intended to do: the idea is to limit the government deficit and to provide credibility to economic policy in Brazil.

SHARMINI PERIES: Now, there’s been some controversy or reports that this is also about social spending, that it freezes social spending regardless of GDP growth. Is that the case, and what impact will it have if it is?

ALFREDO SAAD-FILHO: This is exactly what it does. Social spending is the area of the government budget that has been growing the fastest because Brazil is a country that is aging very rapidly. Population growth has stalled for the last 20 years or so, so the population is getting older, and demands on the social security system have been increasing. Which is also a peculiarity of the Brazilian Constitution, that it is very progressive in the social realm. It has a very… a good social charter providing education, universal education, providing a universal health system. And this is incompatible with the now liberal economic policies that this administration is trying to implement. And in the attempt to break this impasse, the government has blamed the fiscal deficit on social spending and tried to limit the spending of the government as a whole as a way to stall the growth, suspend the growth, of public education and public health in Brazil.

SHARMINI PERIES: Now, why would the Temer government, who is in a very tenuous position as far as popularity is concerned, particularly given that he was not elected — and a measure being introduced here and passed now is also very unpopular — why would he be throwing himself into such a vulnerability as far as what’s happening on the streets and so on, if he is looking like he wants to remain the president here?

ALFREDO SAAD-FILHO: Because this is what they were trying to achieve by removing President Rousseff from office: trying to shift economic policy in Brazil towards neo-liberalism. You will notice that what is not included in the ceiling for fiscal spending is the interest that is paid on the domestic public debt. So the banks are protected — the financial investors are protected — but the retirees, but the people who have illnesses, but the children in the public school system, they are not protected, and their services will be limited, so that the government should have enough money to pay the banks. This is exactly what is happening in Brazil at the moment, which is a political priority and President Temer is paying those who supported him.

SHARMINI PERIES: And the other question is why was this done through a constitutional amendment, rather than a piece of legislation?

ALFREDO SAAD-FILHO: Because the public expenditure in health and education and the public pensions paid by the State, they are all set in the Constitution. So you would need something of that legal status in order to limit those outlays.

SHARMINI PERIES: All right, then the people are protesting on the streets. What do you think the short-term and the long-term effects of this measure will be on Brazilians?

So this is the reason why there has been a lot of resistance against this particular measure. And President Temer, whose popularity is now stuck in single digits — he is less popular than President Rousseff was at the end of her administration — President Temer is trying to present this constitutional amendment as a political victory. But it may well be that this is really the end of his administration.

SHARMINI PERIES: Well, how is it that a very unpopular president with an unpopular Congress, with a very unpopular constitutional amendment, gets it all through? I guess he’s putting his political life on the line here because of the investigations that have also been underway and there’s been some determination on all of that. So it doesn’t look like he’s actually going to be able to even run in the next election. Would you explain all of that to us?

ALFREDO SAAD-FILHO: He cannot run in the next presidential elections that are scheduled for 2018 because he has been judged guilty in a case of corruption, and therefore rendered ineligible. So, one of the many paradoxes of the political situation in Brazil at the moment is that the current president cannot run for his own office in the future. It is absurd.

Now, President Temer is in a very tenuous position, but he does have a majority support in Congress, which is a very unpopular Congress, with a large number of members of Congress being accused of corruption and other misdemeanors. Now, even though the political system is highly unpopular, the President is there to deliver something that was promised when he was leading the conspiracy to overthrow President Rousseff. This is what he is trying to do, and any hesitation on his part will lead to — almost inevitably lead to — his removal from office.

Now, notice the date: if President Temer is removed from office or forced to resign before the 31st of December — this year — then there will be direct elections for a president in Brazil. If he resigns or is forced to step down next year, then there will not be direct elections and Congress will elect someone indirectly to complete the administration until 2018. So there is a race going on. This administration is extremely fragile, and if the president steps down, there will be elections, but my bet is that he will not step down right now. He will wait at least until the end of the month, try to coast until the beginning of the next year, so that Congress will be able to elect someone that they trust, while in elections you do not know what you’re going to get.

SHARMINI PERIES: Right. Alfredo, there is a large number of legislative and Senate lawmakers that are being investigated at the moment for their corruption, or accusations of corruption and so on, and in an article in The Globe and Mail a few months ago, they put this number at a very high rate — over 360 people in the Legislative Branch being investigated. This pits a really peculiar situation in terms of governance in Brazil with the courts and the legal system against the Legislative Branch. What do we make of this and what can we expect in the next few months?

ALFREDO SAAD-FILHO: Corruption is the way in which the Brazilian political system works. The law says that financing for political campaigns and political parties has to follow a particular route, but that route is insufficient to support very expensive campaigns that have been taking place in the country recently. So a lot of the funding for politicians and for candidates has to go through illegal channels. This is absolutely well-known in the country. It has always been well-known, but it has become a major political issue right now.

The judicial system has been pursuing a number of leads of corruption, but it is very, very important not to have any illusions about what is going on. This is a dispute between groups, between cliques, to see which one is the most prominent power in the Republic — and at the moment the most prominent power is the judiciary. There are no controls essentially over the judiciary in Brazil. It is divided within itself. Every day there are newspaper headlines about fights between members of the Supreme Court and between judges at the lower level than the Supreme Court itself. And they fight between themselves, they fight with the lawmakers, particularly in the Senate at the moment, and they all try to push President Temer to do their bidding. It is an extremely confusing, chaotic, even political situation where we see, at the same time, the disintegration of democracy in the country, and the collapse of the Constitution. It does not look good, and I suspect that the Brazilian Constitution will not survive for very long.

SHARMINI PERIES: All right. Alfredo, I thank you so much for joining us today, and we’ll be following this over the next few months, and I hope you join us again very soon. Thank you.

ALFREDO SAAD-FILHO: Thank you so much.