Professor Alfredo Saad-Filho of SOAS, University of London says at the heart of the problem is corruption that has plagued the country for over 500 years. The financing of elections is another major issue.

Professor Alfredo Saad-Filho of SOAS, University of London says at the heart of the problem is corruption that has plagued the country for over 500 years. The financing of elections is another major issue. 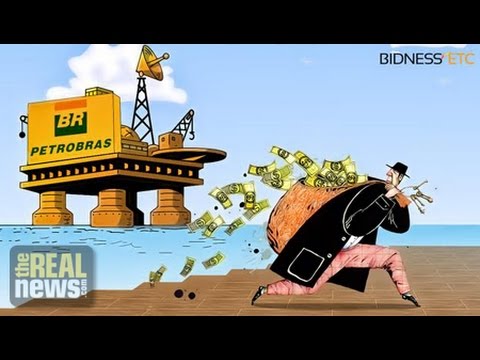 SHARMINI PERIES, EXEC. PRODUCER, TRNN: Welcome back to The Real News Network. I’m Sharmini Peries coming to you from Baltimore.

I’m in conversation with Alfredo Saad-Filho. He is a professor of political economy at the School of Oriental and African Studies, SOAS, at University of London. And he was a senior economic affairs officer at the United Nations Conference on Trade and Development.

Good to have you back with us, Alfredo.

PERIES: So Alfredo, in our segment one, we talked about how these March 15th protests came about, who’s responsible. So if you haven’t watched that part, please go back and watch it. And this segment is going to be dedicated to more of the national issues that the PT government is trying to deal with. And number one on the list is really the corruption that this PT government who’s been in power for so long has not been able to really tackle very well. Why do you think that is the case, Alfredo?

SAAD-FILHO: There are two reasons for this. One is that corruption is profoundly ingrained in the structure of the Brazilian state, and that has been the case for the past 500 years. The more specific reason is that the financing of political parties, the financing of elections in Brazil, at the moment the way they are structured inevitably will involve corruption. Campaigns are, political campaigns, are extraordinarily expensive. These campaigns are financed primarily through donations coming from large companies. And that will be legal, according to the letter of the law, and perhaps rightly so. But the fact is that the campaigns have to be financed somehow and they will involve transfers, illegal transfers, from companies to political parties.

This is the story, and it involves most political parties in Brazil including the PT, but the other ones too. And this has been, has come to light in a number of scandals. More recently the excuse for the current wave of demonstrations against the Rousseff [inaud.] administration and the umbrella under which all wings of the opposition have been sheltering themselves is the Petrobras corruption scandal. Petrobras is the state-owned oil company in Brazil. It is one of the–it is the largest company in Brazil, one of the largest oil companies in the world. And it has been found recently that a small number, a very small number of directors of this company were using that position not only to enrich themselves but also to channel funds from companies, usually companies involved in the oil supply chain, to transfer money from those companies to assorted political parties including the PT, but also several other political parties. But this scandal has catalyzed the current wave of political demonstrations against the government in Brazil.

PERIES: All right Alfredo, let’s set aside the issue of corruption for a moment and then look at the economy and how the PT government might have failed the people, particularly those at the most marginalized parts of our society. One thing very interesting about the Brazilian economy is that right through the economic crisis the rest of the world was facing, that is the 2007-2008 crisis, Brazil was somewhat the poster child of how it survived that crisis and a lot of international money actually moved to states like Brazil and India during the crisis.

Now, why then this sudden fall? It was doing well and then suddenly we see the economy taking a dive. Why is this happening?

SAAD-FILHO: This is because of a tragedy and a miscalculation. The tragedy is that Brazil did very well during the commodity boom of the early 2000s. When the crisis hit the economy contracted, but Brazil recovered very rapidly from the crisis. Along with China, South Korea, and other countries, Brazil implemented very aggressive fiscal and monetary policies against the crisis, and came out very strongly already in 2010. that was a significant economic policy success.

Since then however, the government in my view miscalculated by believing that the consequences of the crisis, of the global crisis, wouldn’t be as severe as they turned out to be, and they thought the crisis wouldn’t be so prolonged as it turned out to be as well. As this unfolded gradually, the government lost resources and steam to continue pushing the economy forward and maintaining [inaud.] the fiscal deficit started increasing, inflation started creeping up. External resources that were flooding into Brazil, into Turkey and other developing countries because of quantitative easing in the U.S. and in the UK, those resources started [moving] back to their countries of origin and the Brazilian economy nosedived. This is a serious problem.

Having said this, until very, very recently, until the beginning of this year it was said in Brazil and this is probably true that no one had [inaud.] as a consequence of the crisis. The economy was floating. Not growing very fast, but it was not in a recession. The recession starts now.

PERIES: Now, tell us a bit more about why during the success, during the growth period when the economy was doing so well why the PT, Workers’ Party–more left-thinking, more socialist in their outlook–was unable to deliver programs and support to the poorest in the country. Particularly given Lula took office on the Zero Hunger campaign, which was partially successful. But it abandoned those programs towards the time when Dilma Rousseff took power. Why did that happen?

SAAD-FILHO: The social programs implemented by the Lula administration, and by the Dilma Rousseff administrations, have been very successful. The Bolsa Familia programming in particular was launched as you mentioned by Lula under the previous name of Fome Zero, Zero Hunger program. And it now covers 14 million families in Brazil. That is about a quarter of the population of the country directly benefit. These are benefits that are very small, but they are significant for people who earn very, very little. And they also provide a bedrock of demand for the economy.

There are other social programs as well including social security, including health, including a significant expansion of education at all levels and so on. So these programs were large and they were successful. They were also cheap. There’s a limitation to the social programs of the PT, is that they usually did not have a sufficient amount of resources to transform the life chances of many of the poor. Although they did transform the life chances of many people who previously could not go to university but now they can, because the expansion of the sector [inaud.] quotas, and people who could not have accessed health services but now they can because of a substantial expansion of health provision in the country.

These were successful programs and they deserve to be commended, except they were limited to some extent and they should have been backed up by a significant expansion of infrastructure as well. This is [inaud.] missing, in my view.

PERIES: And what will be required, and is it still possible for the Dilma Rousseff government to develop and implement more sustainable economic development plans for the most vulnerable in the society?

SAAD-FILHO: This is now very difficult. Because the government has been pinned down by the lack of political support, by the most right-wing Congress in a generation, and by its isolation from significant, very large sectors of the population, particularly the most privileged segments of the population. On top of all these internal difficulties, the global economy is not growing so Brazil does not have an external engine of growth either.

So in view of all these [inaud.] I think it would be very, very difficult for the Dilma Rousseff administration to recover and to maintain, much less to expand, these social programs that currently benefit a large part of the Brazilian population. I do not expect this government to be very successful.

PERIES: And so hence do you think there is a greater possibility that the rise of the right will continue to gain momentum in Brazil?

SAAD-FILHO: I think this is unfortunately the most likely scenario at the moment. With a government that is by and large paralyzed and unable to launch a political or economic initiatives, and with the isolation–ideological and institutional isolation of the PT core of the Rousseff administration, it is unlikely that the left will be able to come out of this corner in which they have been placed, which is also likely that the social movements that have been traditionally aligned with the PT will be able to rise in defense of the Rousseff administration. They haven’t been able to do this so far, at least.

And for these circumstances the most likely outcome is that the Rousseff administration will limp along unable to take significant initiatives, and simply counting the time until the next elections. This is unfortunate but I think it’s the most likely scenario.

PERIES: Alfredo Saad-Filho, thank you so much for joining us today.

SAAD-FILHO: Thank you very much.

PERIES: And we look forward to having you back.