Alan Collinge: Student loan bill only perpetuates a system that preys on students

Alan Collinge: Student loan bill only perpetuates a system that preys on students 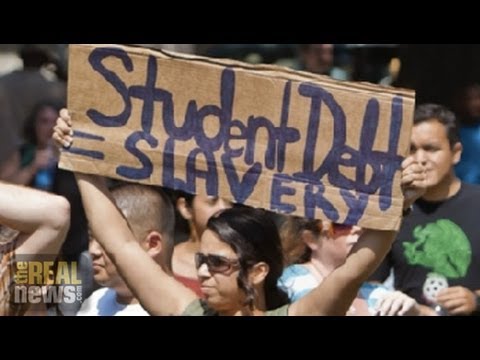 The House is expected to vote and possibly pass a student loan bill that passed the Senate last week by a vote of 81 to 18. The new bill would tie the student interest rate to market rates instead of the current 6.8 percent on federal loans taken out for the 2013-2014 school year. Rates on the subsidized Stafford federal loans doubled to 6.8 percent on July 1 because the bipartisan Congress could not agree on a way to keep them at 3.4 percent.

To discuss this news we are joined by Alan Collinge. He’s an author and founder of StudentLoanJustice.org, a grassroots organization and political action committee with chapters across the United States, and author of Student Loan Scam: The Most Oppressive Debt in U.S. History and How We Can Fight Back.

Thank you so much for joining us, Alan.

ALAN COLLINGE, FOUNDER, STUDENTLOANJUSTICE.ORG: Good to be with you.

NOOR: So, Alan, what do you make of this latest news? Is this a victory for students and taxpayers as Rep. John Kline, Republican chairman of the House Committee on Education and the Workforce, has said?

COLLINGE: Well, I would say it’s a victory to a manufactured problem, and a small one at that. You know, the actual financial ramifications of the interest rate having doubled was only about somewhere between $1,000 and $3,000 over the life of the loan for affected undergraduates to begin with. So it was really not that big of a deal to start out with.

It’s nice to see some bipartisanship, I suppose, but, you know, in my view this whole fiasco has been essentially a distraction to the fact that there are structural problems with the student lending system that Congress has yet to deal with and absolutely needs to in a very critical way.

NOOR: Can you talk more about what these problems are in your view?

COLLINGE: Well, the lending system has turned functionally and structurally predatory because of the fact that the most standard consumer protections that American citizens have every reason to expect exist for every type of loan don’t exist for student loans. They’ve been removed. So this includes bankruptcy protections, statutes of limitations, truth in lending requirements. And a very, very serious and unprecedented collection industry has been given power that no collection industry has ever enjoyed. And so this has caused a debt system where it’s quite frankly more profitable for the lending side when loans default rather than remain in good stead.

This is very dangerous, and it has enabled the inflation that we’ve seen. It has enabled a cavalcade of corruptions across the system. And while it has greatly enriched the universities and allowed them to raise their prices willy-nilly and also enabled horrible, or even, I would say, inexcusable, absent government oversight, it has not helped the students. And, you know, it’s–I guess I would sum it all up by saying it’s not the interest rates that the citizens are, you know, going to public spaces, camping out, and protesting about. It’s the sticker price. And until they deal with the structural problem that I just mentioned, the price of college will only continue to rise.

NOOR: And we hear a lot of talk of how massive this problem is, hear the number of $1 trillion in debt. Can you talk more about the scale of this problem?

COLLINGE: Oh. Well, it’s–frankly, it’s astounding. I started studying this issue in 2005, and at that time we owed less than $400 billion as a nation in student loan debt. And that was a huge amount at the time. I mean, it was almost unfathomable. Here we are, what, eight, nine years later, and we currently owe about $1.2 trillion in student loan debt. This has raised–the price of college has risen faster than health-care costs, faster than even home prices before the bubble and bust in 2008. And so I think that puts it in a pretty good perspective so people can understand the seriousness of it.

NOOR: And what are some common-sense solutions to this problem?

COLLINGE: Well, it’s very simple, quite frankly. You know, Congress manufactured this crisis by removing, number one, bankruptcy protections, but also statutes of limitations, state usury laws, and other fundamental consumer protections that enable the debt spiral to begin. Similarly, Congress can very quickly solve this situation by returning at a minimum the standard bankruptcy protections that should have never been taken away. By doing this, they will force the lending side to have skin in the game on the side of the borrowers rather than on the side of the banks. And in this environment, we can expect the Department of Education to begin cracking the whip on the schools to get serious about lowering their prices, improving their quality, and so forth. This is how a free-market system works. I mean, the most ardent conservative economist, including Adam Smith himself, would agree with me.

NOOR: And where is the movement pressuring Congress to do this, to act?

And I can only hope that the affected citizens will take this very seriously, because I can guarantee you, having fought this battle for eight years, that if the citizens do nothing and expect the powers that be in Washington, D.C., to do their work for them, it will not get done. It absolutely will not. This is incumbent upon the citizens to fight this battle for themselves, unfortunately, because we are on our own.

COLLINGE: Thank you. It’s been a pleasure.