Will the Russian Left Respond to Deepening Economic Crisis?

Aleksandr Buzgalin: The Russian left shows signs of growth in spite of being shut out of mass media

Aleksandr Buzgalin: The Russian left shows signs of growth in spite of being shut out of mass media 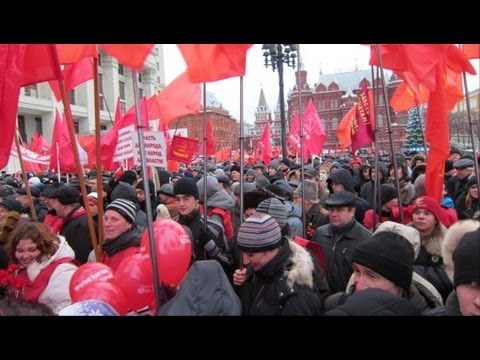 And now joining us from Moscow for an update on things in Russia is Aleksandr Buzgalin. He’s a professor of political economics at Moscow State University. He’s also editor of the independent democratic left magazine Alternatives. Thanks for joining us again, Aleksandr.

JAY: So the recession deepens in Europe. Unemployment continues at extremely high rates in the United States. What is the situation in the Russian economy? How much is it affected by what’s going on globally? And how is the left in Russia responding to it?

BUZGALIN: It’s very important topic for us, and I’m very glad to talk about this with international audience. First of all, I want to stress that in Russia we have a very long and deep recession. It’s not maybe new wave of crisis in all forms, but we have very interesting and specific elements of this recession which are not typical for the West.

And main form is nonpayments between different enterprises, firms, and so on. As a result, people typically are working for nothing. I have very interesting examples when one firm will order some work for another, the work will be done, and then this organization will wait for one, two, three, five months when money will come. It’s very strange situation, but we do not have any real opportunities to fight against such situation. And this creates very big problems for ordinary people, because they do not have wages. They are working, but they do not have wages.

It’s similar with problems of 1990s, when we had very deep crisis, not simply recession, and it’s create absolutely [incompr.] atmosphere in the [incompr.] Plus a lot of problems in the sphere of education, health care, housing, are not solved.

And when peopleâ€”officials, not people, officials are explaining that inflation is not so high, only 10,Â 12Â percent, maybe a little less officially, they will never say that for ordinary people inflation is much higher, because all main consumer goods, plus public transport entering Russia, it’s very important for ordinary people, plus housing, heat, electricity, water supply, and so on. Prices in all these spheres are growing 15,Â 20,Â 25Â percent and jumping permanently. So this is really big problems for our people.

And this is very unpleasant situation for many Russians who became more citizens after rallies which took place last winter and spring when we had up to 100,000 people on demonstrations in main squares. And it was really important, and atmosphere, spirit of these rallies were very unusual, because ordinary Russians understood that they’re real members of civil society, maybe first time after many years. Only in 2005 we had big rallies against monetization of benefits.

JAY: Right. When we talked about this last, about the big rallies, you pointed out that much of the leadership were coming from forces that in fact wanted a different variation of neoliberal economics, and they were raising the democratic questions sort of to serve those interestsâ€”maybe less so about, you know, a kind of more genuine democracy. So if that’s the case, how is the left responding to that now?

BUZGALIN: It’s very important that you ask this question, because the last rally, which took place SeptemberÂ 15, had officially 12,000 participants. Really it was maybe two times bigger, but still not as big as before, and the whole atmosphere was not so enthusiastic as before. But among all these people, participants, left groups, left, different political, social movements and organizations were represented much, much bigger than before, and it was not maybe 5,Â 10Â percent of people with red flags or left slogans, but maybe 30Â or something like that.

The situation is moving and changing. A lot of people understood that these formal democratic slogans, which are importantâ€”honest elections and so onâ€”really will not solve deep social contradictions. And to solve them is key question now for Russia, not only democratic. Both democratic and social questions are important [incompr.] And this is the main agenda of forum of leftist forces, second forum of left forces, which took place before a rally SeptemberÂ 8 in Moscow in a big hotel. And more than 300 people cameâ€”mainly from Moscow, because the Russian periphery could not come. They simply cannot pay for ticket. To come from Siberia to Moscow costs more than to fly to New York now. For ordinary Russians it’s necessary to spend three, four, five months’ wage to come to Moscow, and they cannot do this. But they were with us. We had a lot of requests and proposals from different cities, regions, and so on.

More than 20 different left organizations, different forms of non-Stalin communist organizations, people who were excluded from Communist Party of Russian Federation because they were too democratic and not enough Stalinist, not enough nationalist. It’s like a joke, but that’s trueâ€”they were excluded for this. All those people, including some Trotskyist groups, a lot of young people, left feminist girls, and so on, came together, made, I think, very strong and important declaration, made march anticapitalism, regular march also successfulâ€”not very big, but very active, and good, enthusiastic atmosphere on it.

It was not bad reflection of this event in local internet, and not only internet, mass media. So it’s really movement forward. And I hope in the future we have more and more consolidation.

Now it’s only coordination. We have coordination council of forum of left forces. It’s approximately 30 leaders and militants of different organizations. It’s interesting, but this council can work like organizations and social forums. It’s mainly democracy of consensus.

JAY: And are they planning in terms of what they plan to do in terms of movements in the streets? Or are they also developing some electoral strategy?

BUZGALIN: Mainly it’s now, first of all, a continuation of the street activity. But idea is to have bigger left influence and more social slogans and goals in this movement, I mean, street activity. And this is successful tactic, not strategy, I can say. Then we are planning to make new social forum, because we must and we want toâ€”not must, we want to involve different social organizationsâ€”greens, trade unions, and so on. And they areâ€”independent trade unions, they’re really left in my country. So I [incompr.] between the successful also integration of political and social, different initiatives.

I’m afraid to make very optimistic prognosis in Russia, because we have very strong cooperation from different sides, from authorities, from even mass media, for trying not to show that we exist; from even opposition, because for Communist Party and Just Russia, they’re thinking that we are competitors, and we are not. We want to work with them, and we are trying to do this, and sometimes successfully. So I have some positive, how to say, intentions and positive feelings about this process now.

BUZGALIN: First of all, their result is predictable, was predictable, because only formal slogans of very strange mixture of leaders, which were dominant before, led to the crisis of such form of demonstration as we had before. Now it’s recruitment. And I hope the more we have social and democratic slogans on these demonstrations and other leaders and in other background and other networks included in these movements, the more we have success. And the question now is not simply 100,000 or 50,000. It’s important, but the key question is atmosphere, activity, and continuation of the struggle. Now we have a small break, and I think we must have a small break for recruitment, for reorganization of forces and creation of new coalitions and umbrella organizations. And this process is developing, and [incompr.] I hope successfully and will be developed.

JAY: Alright. Thanks for joining us, Aleksandr.

BUZGALIN: Thank you. And sorry for this glass of water. It’s not so simple at the end of the day to talk. But I was very, very glad to have this interview and I hope to continue cooperation. Thank you. Goodbye.

JAY: Thanks. And thank you for joining us on The Real News Network.