A Struggle Amongst Oligarchs in Ukraine Pt.2

Professor Aleksandr Buzgalin continues his explanation of historical relations between the Crimea region of Ukraine and Russia, ahead of a referendum vote which could bring Crimea under greater Russian control

Professor Aleksandr Buzgalin continues his explanation of historical relations between the Crimea region of Ukraine and Russia, ahead of a referendum vote which could bring Crimea under greater Russian control 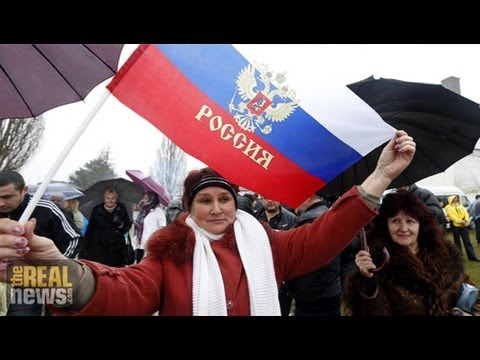 JESSICA DESVARIEUX, TRNN PRODUCER: Welcome to The Real News Network. I’m Jessica Desvarieux in Baltimore. And welcome to part two of our conversation with our guest Aleksandr Buzgalin to discuss the Crimea crisis.

Aleksandr is a professor of political economy at Moscow State University.

Thank you for joining us again, Aleksandr.

DESVARIEUX: We certainly do agree about that.

So, Aleksandr, let’s first talk about what’s happening there in Russia. Are Russians in support of Putin’s move to invade Crimea?

BUZGALIN: Again, in Russia, we do not have such terminology and such sentences, intervention to Crimea or intervention to Ukraine. In Russia, we are speaking–I mean mass media, officials, and so on–about support of Crimea people, peoples of eastern regions of Ukraine who don’t want to follow to the decrees and order which was established in Maidan in Kiev and in western regions of Ukraine with support of nationalist Ukrainian forces. And this created big wave of Russian nationalism.

But also this wave has a real basis, because in eastern, southeastern part of Ukraine, especially in Crimea, a majority of people are Russian-speaking people, and we have very old and friendship traditions of common life. And for us to have NATO troops, for example, in Crimea, it’s something like to have, I don’t know, Russian Navy in New York, Hudson River. It’s the same. What will be reaction of normal, I don’t know, Americans if Russia will have bases in New York? Because we are very peaceful, of course, Russians. So that’s just image.

Another example. Why we are so emotion–and there are a lot of emotions, not only of analysis, in Russia. Why? The situation is similar with, for example, in Belgium. You know there is French-speaking part and there is Flemish-speaking part of Belgium. What will be if by order it will be forbidden to speak French for one half of population of Belgium, and all degrees, all universities, all school textbooks, all main programs, state programs of TV will be only in Flemish and nothing in French? What will be reaction of France and French-speaking people in Belgium? What will be reaction of Europeans?

DESVARIEUX: But the prime minister vetoed that, Aleksandr. So with President Putin claiming that Russians in Ukraine were under attack, I mean, were people really buying that? I mean, is that a way that he rallied a lot of support there in Russia?

BUZGALIN: So the problem is not to intervene with troops. And I hope very much that it will be no intervention, because it can be provocation for the war. And war between Ukraine and Russia, this is, first of all, tragedy, but this is also extremely negative from moral point of view, from cultural point of view, from all these aspects. Yeah. It’s not only victims and material problems; this is also very big cultural and moral problems. They are extremely important, because we had many, many–we had hundred years of friendship. This is important.

Fortunately or unfortunately–it doesn’t matter–but Russia is not superpower. This is one of the important countries, but nothing more. And I hope very much that we find peaceful solution without Russian troops and without NATO troops.

But if Ukraine will be part of NATO–and Crimea, in this case, must be also base for NATO fleet and so on–Sevastopol will be part of NATO territory. It will be terrible, negative feelings in Russia. It will be explosive of mass enthusiasm against this, and not only because of nationalism, but because of the historical traditions and heroic traditions, as I said in the beginning. So be careful with this.

DESVARIEUX: Yes. I’m glad that you brought up NATO, because I wanted to get your perspective on how the Russian political elites and how they’re concerned about Ukrainians forging closer ties with the E.U. Is Putin also concerned that if they do forge closer ties to the E.U., that eventually that will mean that they will become part of NATO? Can you speak to that a bit?

BUZGALIN: Yes. First of all, the European Union and NATO is not the same, but there is a very deep interconnection. And this interconnection is, by the way, not very positive, because very often when people are thinking about economic, cultural, political close relations with European Union, with standards of European social democracy, this is positive, but when we must be part of NATO policy, with attack against Iraq, for example, or something like this, this is very negative. That’s why it is a big question mark–big contradiction between NATO and the European social democratic values.

And we are thinking more about not social democratic values but about NATO. Why? Because in periphery of European Union countries, there is a few features of social democratic model. There are a few aspects of social protection, social justice which is more or less typical for Scandinavian countries. But there are a lot of elements to use these territories as part of the full manipulation with the goals of NATO. That is why there is big tension.

And the image of NATO as not very friendly organization to Russia is also part of reality, unfortunately again. And very often we cannot understand against whom is NATO–against terrorism, but here there is no necessity to have strategic weapons; against China, but there is no–any declarations about this; against Russia, no. So this is big question mark for Russians: against whom is NATO? Why we cannot create international system of security under the supervision of United Nations? Why we need NATO? And for Russians, this is big questions. And militarization of Russia is negative tendency, but for many people this is understandable tendency. And I don’t like both trends, militarization and these changes in mass mentality of Russians.

Also, in Russia, we have people who are supporters of real human rights, real protection of national sovereignty, and so on. But very often United States politicians, NATO policy, has double standards, and what is okay for NATO is not okay for Russia. We can start war in Iraq, I mean, NATO, but Russia cannot start war in another region without our permission. We are the only world policeman, NATO proclaims that NATO is the only world policeman, nobody else. I don’t know if all countries agree with this. In Russia, a majority will not agree with this.

And one more aspect. We have negative aspect of behavior of our far-right liberals, for whom all decisions of Western right-wing politicians are good, all other decisions are bad, and it doesn’t matter who made this decision–Cuban leader, Venezuela leader, Russian leader, Chinese leader: if Obama said it’s bad, it’s bad. And such type of behavior of our so-called elite right-wing intelligentsia creates alienation of this so-called elite from majority of Russians and provoke more and more nationalism.

Finally, real democrats and internationalists like me, like all our friends and network alternatives, movement in defense of democracy, movements in defense of education, and so on, we are in terrible situation, because when we are speaking about democracy for majority, this is democracy by NATO troops established by NATO troops, not from below. And every time we must discuss this question, we must explain that this is not geopolitics of NATO, this is real necessity of Russian people, and so on.

And the same with Ukraine as example. I don’t know if it will be Maidan in support of Russia in joining of Ukraine to Russia. Will Western mass media support this Maidan? Will they say it’s very good that Maidan people occupated all buildings who wanted to join to European Union? Please try to imagine picture. Yanukovych decided that Ukraine will be part of European Union, and Ukrainian people said, we don’t want to be part of European Union. And 50 percent of Ukrainians, or approximately 50 percent, doesn’t want to be part of E.U. And then Maidan, and then occupation of buildings.

What will be reaction of the United States? Bravo, peoples of Ukraine! Bravo! You want to be part of Russia? We like your will, we like your real democracy. Or it will be something opposite.

In Russia we understand that it will be opposite. That’s why we don’t trust too much to this support of so-called democracy from the West very often, unfortunately.

DESVARIEUX: Alright. Aleksandr Buzgalin, professor at Moscow State University, thank you so much for joining us.

BUZGALIN: And thank you for opportunity to tell you this provocative and contradictory but important suggestions.