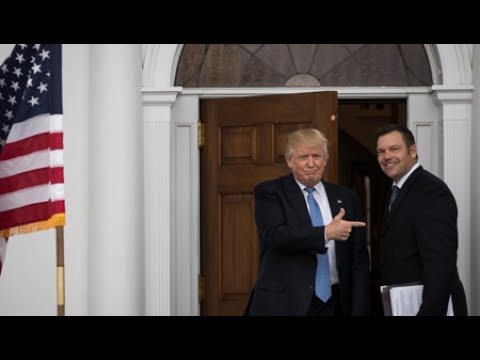 AARON MATÉ: It’s The Real News. I’m Aaron Maté. The Trump Administration wants every U.S. state to hand over private voter information, but it’s instead gotten a backlash. 45 states have now refused to provide at least some of the personal data sought by Donald Trump’s presidential commission on so-called election integrity. The commission’s vice-chair, Chris Kobach, wants info like names, Social Security numbers, addresses, birth dates, political affiliation, and criminal history. The commission was established after Trump claimed he would’ve won the popular vote if not for ballots illegally cat by undocumented immigrants. Critics say the commission’s true person is to make it harder for people to vote. The backlash against Kobach’s request is bipartisan, but half of the states saying no are Republican, including some with officials who sit on Trump’s commission. Ari Berman is a senior contributor for The Nation and author of Give Us the Ballot: The Modern Struggle for Voting Rights in America. Ari, welcome.

ARI BERMAN: Hey, Aaron. Good to talk to you.

AARON MATÉ: Thanks for joining us, Ari. Talk about this request from Kobach, and the backlash that it’s received.

ARI BERMAN: It was a pretty amazing request, so Kobach asked for what he called publicly available data, but then he asked for all of this stuff that was not in fact publicly available, like Social Security numbers, criminal history, military history. This is not something that you can just walk, he says you could just walk in and get it. You can’t just walk in and get this kind of information. I think that led to a political firestorm, where states, both red and blue states, started saying, “We’re not gonna give you this information,” because it was not public information, I think because some people didn’t trust the Trump Administration with this information, and because Kobach has a long history of using this information for very, very misleading ends. He was just sanctioned last month by a federal court for deceptive conduct and lack of candor, in the court’s words. This is not something we want with information on voters in all 50 states.

AARON MATÉ: I want to get a bit more into Kobach’s history, because you recently wrote a long piece on that for The New York Times Magazine. Before that, what do you think was his intent here in seeking all this information, and also, did they not anticipate that asking for such private information would prompt such a big rejection?

ARI BERMAN: To answer your last question first, this clearly didn’t seem to be something that was thought through very well, because Kobach himself couldn’t turn over Social Security numbers of voters in Kansas, because that’s private information there. He was asking for information that he himself …

AARON MATÉ: As Secretary of State of Kansas.

ARI BERMAN: … Could not provide the committee, and members of his own commission rejected his request, the Secretaries of State from both Indiana and Maine refused to give him some or all of this information, so he clearly didn’t check with his own commissioners. This seemed to be very haphazard. He also sent letters to the wrong people in certain states, the wrong election officials, so the whole thing was kind of a joke. I think he wanted it because he wants to run all of his voter information into multiple databases that both he and the federal government has, to check for double voting, check for noncitizen voting. The problem is that the databases he’s going to use are very inaccurate. They’re not designed for this purpose, so the more data that he gets from states, the more lucky that he’s going to dramatically overestimate the actual prevalence of voter fraud.

AARON MATÉ: I’m wondering if the intent was even more nefarious than that, that actually he’s seeking this data to help efforts to suppress the vote further than already has been done.

ARI BERMAN: I think it’s going to do that, but I think the first step in doing that is making all these wild accusations about voter fraud. The second step after you’ve made all these wild accusations is to put in place policies that make it harder to vote, like strict voter ID laws, like making it harder to register to vote, like purging the voter roll. I think that was always the aim of this commission, but I think first he wants to sort of present all of what he believes are the facts. I think they’re going to end up being alternative facts, as Kelly Anne Conway famously said, but I think that there’s a process here. The first process is, you lie about voter fraud. The second part of it is then you put in place policies that suppress the vote.

AARON MATÉ: All right. Let’s talk more about Kobach. You point out in your piece for the New York Times Magazine that his focus is not just making voting more restrictive, but also targeting immigration rights.

ARI BERMAN: Absolutely. I think most people think of these two issues as separate, that voting is one issue and immigration is another issue, but Kobach has really fused these two issues. He’s really fused anti-immigrant sentiment with policies that would restrict the electorate, particularly aimed at suppressing votes among people of color. What he did is before he became Secretary of State of Kansas, he went all around the country drafting anti-immigrant legislation, like Arizona’s SB1070, which was known as the Show Me Your Papers Law, where police there could basically go around and arrest anyone that they had reasonable suspicion of being in the country illegally. That was something that was written by Kobach, and he wrote dozens of these kind of laws, and then he began saying that not only were people here illegally, but they were voting illegally as well, and so he combined these two issues, in my view, in a really toxic way that was very, very popular with the Republican base, but very, very destructive to democracy.

AARON MATÉ: Ari, given that we now have this so-called election integrity commission, I’m wondering if you could comment right now on the state of the struggle for voting rights in the US, which is the topic of your book Give Us the Ballot. What is the state right now of those who are trying to push back against efforts to suppress the vote?

ARI BERMAN: I think we’re in a state of emergency when it comes to American democracy. We just got out of a presidential election that was the first presidential election in 50 years without the full protections of the Voting Rights Act. We saw voter suppression efforts in states like Wisconsin, North Carolina, Texas in 2016. We saw all across the country, new laws were put in place to make it harder to vote. 22 states have implemented new voting restrictions since the 2010 election. That trend is only getting worse now. In 2017 alone, there have been more new laws passed to make it harder to vote than 2015 and 2016 combined, so I think this has been a really under-covered story, what’s been going on at the state level. My big fear is now that Chris Kobach and others are going to take what’s been happening at the state level and try to put it at the national level, to federalize the efforts. I think the Trump Administration marks the first step in this. I think Jeff Sessions’ Justice Department is going to be a key part of this.

You’re going to have both GOP states and the federal government suppressing votes in advance of the 2018 and the 2020 elections, and I think that’s a very scary prospect.

AARON MATÉ: Ari, finally, you mentioned this being an under-covered story, so let me ask you then about how the media has been treating your beat, which is voting rights. When we talk about the 2016 election, there have been so many pieces trying to understand the mind of the Trump voter, and explain, get into explaining why people voted for Trump. I have not seen as much work on the front that you’ve taken up, which is people being denied the right to vote. I’m wondering, your assessment of how the media has covered the suppression of voting rights, and perhaps maybe if there are some key states where you think the problem is the most acute, examples that most of us might not know about.

ARI BERMAN: There were 26 presidential debates during the primaries and the general election, and there wasn’t a single question about the vetting of the Voting Rights Act or attacks on voting rights, so that’s one way that I qualify how this was an under-covered story, the time when the most people were tuning in, this didn’t get any coverage. I found that particularly alarming in a presidential election year, when there was so much talk about polls, and who people were voting for, and so much less discussion about whether people were be able to vote in the first place, or new obstacles they might face at the ballot box. I think there should’ve been a lot more reporting. For example, when Wisconsin put a strict voter ID law. That’s a state that was decided by 22,000 votes, but 300,000 registered voters didn’t have strict forms of ID there. That’s something that needed a lot more attention.

In North Carolina, where polling places were cut, black turnout was down 16% during the first week of early voting, after early voting locations were limited. Throughout the South, there were 868 fewer polling places than there were in 2012, so these are all stories that I think need to be reported on before the election, but certainly after as well. To me, unless it directly related to Trump, like with this rebellion against the voter data, it doesn’t get any coverage.

AARON MATÉ: Ari Berman, senior contributor for The Nation and author of Give Us the Ballot: The Modern Struggle for Voting Rights in America. Ari, thank you.

ARI BERMAN: Thanks a lot, Aaron.

AARON MATÉ: Thank you for joining us on the Real News.

Ari Berman is a senior contributing writer for The Nation magazine and a Fellow at The Nation Institute. His new book,Give Us the Ballot: The Modern Struggle for Voting Rights in America, was published in August 2015 by Farrar, Straus and Giroux. He has written extensively about American politics, civil rights, and the intersection of…