A Rare Glimpse Inside a Police Body-Camera Review Unit

Following the release of controversial footage that showed Baltimore police officers staging the discovery of evidence, The Real News was given exclusive access to the special unit that now reviews all body-cam footage related to upcoming cases

Following the release of controversial footage that showed Baltimore police officers staging the discovery of evidence, The Real News was given exclusive access to the special unit that now reviews all body-cam footage related to upcoming cases 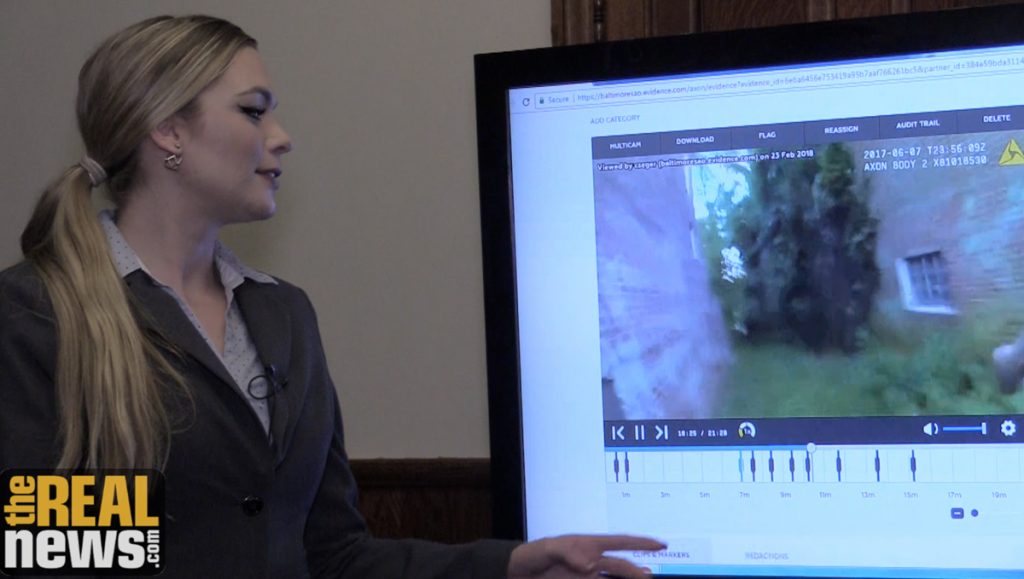 TAYA GRAHAM: The introduction of body cameras has been a source of controversy for the Baltimore Police Department. Last year we spoke to attorney Josh Insley about footage he believes suggested police planted drugs on his client.

JOSH INSLEY: So they tear the car apart. I mean, literally, I mean they’re pulling out the radio, pulling apart the doors, looking under the seats, all that stuff. After a while they don’t find what they’re looking for. I know what the police position is, which is basically, you know, it was a legit find. But I can only say what I see in the video, Which is, You know, it doesn’t look good.

TAYA GRAHAM: And it was one in a series of videos showing questionable police practices and ultimately led to charges of mishandling evidence against an officer seen in this footage. Which brings us here to the Baltimore state’s attorney evidence review unit. In offices on the third floor of the Mitchell courthouse nearly half a dozen assistant state’s attorneys, or ASAs, watch thousands of hours of footage weekly, not just to hold police accountable, but to check evidence and prepare cases for trial.

The Real News was offered an exclusive glimpse inside the operation. A chance to show the public how it works and what they see every day, and how it might impact law enforcement in the city.

SANDRA GOLDTHROPE: Our main objective is to review and disperse to the ASAs all body worn camera footage from the Baltimore Police Department that is involved with an arrest or a must appear in court citation. Since the program started we’ve received over 139000 videos.

We divide them up every day amongst the clerks and the ASAs that are here, and each individual could get anywhere from 6 to 10 hours per day.

CHELSEA SEGER: Sometimes even more, depending on how many videos are in the case and what type of case it is.

When I review videos I will tag or add markers on the video when they arrest the defendant or when the y search the person, if there is a substantive statement made by the victim or the witness. Also if there’s a substantive statement made by the police officer regarding probable cause or the recovery of evidence. We also tag when evidence is recovered.

SANDRA GOLDTHROPE: We’re probably since the program started at about 24000 cases. Our first objective is to get the films to the ASA. And one of the challenges we have, and I would say, fair to say the Baltimore police have, is making sure we get all the videos. So the procedure is the officers are supposed to mark every time they have a film in one of those categories, an arrest or must appear, with the court case number, with the, what we call CC number. Unfortunately, sometimes they forget. The process for getting tickets marked correctly has just started probably in the fall so some officers, again, it’s muscle memory, remembering to do it.

When we see a variety of things, and let’s say it could be if we noticed something in the video that we think might be of interest or issue. We’ll, we put notes on the video. There is a way in the software to put notes. We also have a case management system where we can put in notes. And we also reach out directly in some cases to the ASA or their unit chief just to say, hey, this is something we saw, just to let you know. It’s always their decision. We don’t make those decisions.

CHELSEA SEGER: You know, 10 years ago all we had to rely on was the statement of probable cause. Now we have the video showing all the circumstances surrounding the incident, and really gives you a different point of view as to what happened instead of relying on the written statement by the officer.

SANDRA GOLDTHROPE: We look for anything that we see that could either be a concern with the case. And it could be something involving the police. And so we have various mechanisms within the organization of who we would report that up to.

CHELSEA SEGER: The most interesting perspective is a sociological standpoint, because Baltimore is unique in that it’s very diverse in terms of you know the sociological makeup of it. So you are seeing people from different, all types of different backgrounds and communities, and it’s, it’s very eye opening. And one of the hardest things for me to watch is cases involving small children that are in situations of poverty, and seeing that the associated impact of poverty on that child. It can be very hard to watch, but it’s also very eye opening as well.

You see everything you know the living conditions of you know some families may not be ideal, and that impact that it has on the kid is substantial. Not only, you know, regarding their education and their situation, which is at no fault of their own, but also has a neurological impact on the child as well.

The officer’s video that you just saw, and this officer’s video, these were the first to respond to the incident. And this is going to show you how the incident transpired, starting with there in the car, and they have, they get information or see the defendant and then he runs. And it will show the foot chase. It will show that the search and any statements that the defendant makes.

What you just heard was the officer calling for backup, for purposes of officer safety.

He takes off his camera to make sure that he documents exactly where he saw, or recovered, the handgun.

So he actually lost his shoe during the foot chase when he ran from the police. And so he asked another officer who was in the other video I will show you next, but he asked another officer if they could recover his shoe for him. And this is just a great example of, OK, this person did something wrong and police handled it. But it’s also showing, you know, something good that the police have done, too. They’re going to go recover his shoe. It’s like, it’s a slice of human life. It’s humanity. So these are always interesting cases to see.

JOSH INSLEY: Well, there’s a couple of layers to it as to us getting, first of all, this is a lot of data and a lot of information. So we’re often getting it at the last minute, literally the day before trial, in an email. And that means we then have to open body camera footage. We have to view it. Sometimes it’s short. Sometimes it goes hours into an arrest. It varies from case to case. So there’s the process of downloading it, which we can’t always handle. And we’ve also been discovering that it’s not just a public defender issue. Private attorneys are having the same downloading issues.

And these are things that are normally, they’re discovery. It’s evidence that the state’s supposed to give over. And they were things before that were normally given to us, like if it was security camera footage, just on a disk for us ready to play. But now that it’s through this online service network, it’s sent electronically literally in an e-mail format. So it’s the download process. Copying it. And then if we want to use it we have to put it in a format that’s easily portable to court.

STEPHEN JANIS: What about the hearing process?

JOSH INSLEY: The hearing process comes into play because you have all of this footage of various people, various statements that are going on in the chaotic scene of an arrest. You may have statements made by a defendant that are taken illegally, if there’s not a Miranda warning given, or from outside parties that aren’t coming in to testify in court, or officers that aren’t being called to testify during a case. And those statements would normally be considered hearsay, because no one can ask anybody any follow up questions as to who’s saying what on the tape. And those statements could be accusatory of, of our client. Sometimes they, they may point out something that an officer is trying to maybe spin in a better light that isn’t true. But then you, you can’t confront it, bring it out properly. Sometimes there are statements that are going to be used against our client, and then the state wants to use it without having actual witnesses.