A Foreign Policy Platform for the Congressional Progressive Caucus

What would a progressive foreign policy platform look like? Democrats, unlike Republicans, have no coherent perspective on foreign policy. Summary of an event convoked by Rep. Ro Khanna to "Chart a Progressive Foreign Policy for the Trump Era and Beyond"

What would a progressive foreign policy platform look like? Democrats, unlike Republicans, have no coherent perspective on foreign policy. Summary of an event convoked by Rep. Ro Khanna to "Chart a Progressive Foreign Policy for the Trump Era and Beyond" 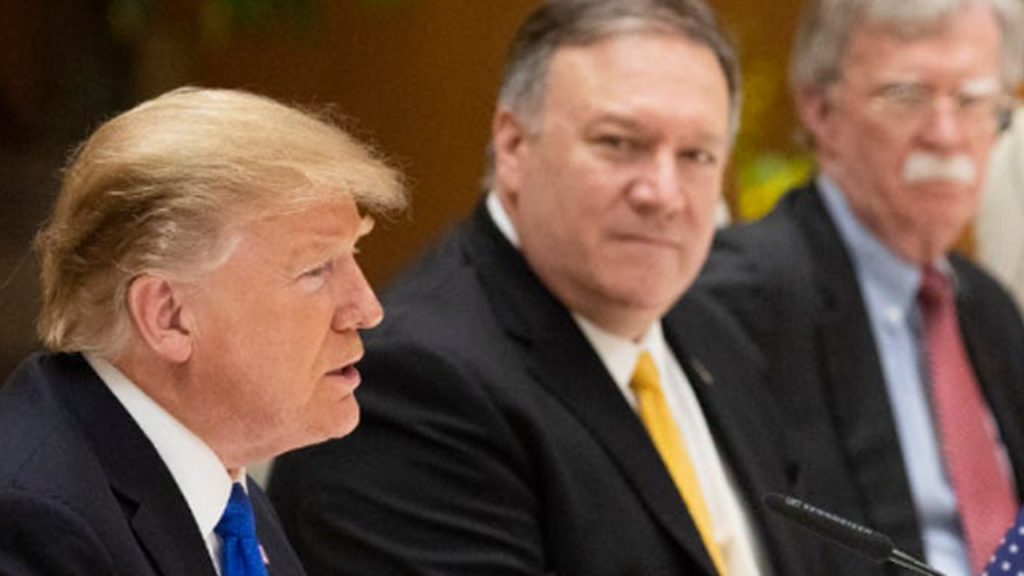 CARMEN RUSSELL: Congressman Ro Khanna recently convened a panel of foreign policymakers. He is tasked with designing a progressive foreign relations platform, the absence of which inhibits the Democrats from adopting a cohesive strategy. At the public event, they worked towards laying the groundwork for a policy Representative Khanna hopes progressives can apply whenever they are faced with foreign affairs questions.

RO KHANNA: I think the Democratic Party and the Progressive Caucus need a coherent, progressive foreign policy. I don’t believe we have one right now. I believe the six people on this panel have done some of the leading thinking on how you have a foreign policy based on restraint and emphasizing human rights that doesn’t turn into isolationism, and how we have a 21st century that doesn’t replicate the mistakes of the Cold War paradigm. My hope is that this conversation is just the beginning and that we will have the benefit of these extraordinary thinkers and practitioners in developing a foreign policy platform for the Progressive Caucus and ultimately for our party.

CARMEN RUSSELL: The group covered considerable ground, looking at the military industrial complex, the War on Terror, Palestine, and relations with Russia and China. The discussion opened with an overview of the deficiencies of current U.S. foreign policy, looking beyond what Boston University Professor Emeritus Andrew Bacevich calls “the grand narrative.”

ANDREW BACEVICH: The grand narrative is familiar and convenient, and therefore facilitates the manipulation of a patriotic but gullible public. And of course, it greases the wheels of politics. As someone recently once said in another context, “It’s all about the Benjamins baby.” So let me specify just two items that should figure prominently in this revised narrative. Item one, climate change. Growing numbers of Americans are coming to an appreciation that climate change poses an existential threat to our country.

TRITA PARSI: The neoconservatives actually have a very well thought through framework for their foreign policy. Because they have this framework, they can very quickly figure out their position and make sure that they coordinate. Secondly, because of this, they can also herd the cats much more efficiently than what you can if you don’t have a framework, because everyone is essentially reading from the same script, which means that it’s much easier for them to be able to coordinate it and act in unison and with the type of unity that is needed in order for them to be able to really be influential.

KATRINA VANDEN HEUVEL: The “liberal global order” praised by the foreign policy establishment has generated obscene inequality and failed to address the real present and growing threat posed by catastrophic climate change. The Pentagon, despite wasting billions of dollars, now has a budget greater than that under President Ronald Reagan at the height of the first or second Cold War. Our trade policies have rigged the rules for global corporations and banks, with devastating effect on American workers and communities.

I would argue what’s needed is a clear articulation of a new strategy of progressive realism. It would focus on these emerging challenges to our security, our democracy, particularly catastrophic climate change and of growing inequality. And it would embrace realist skepticism about regime change, military intervention, policing of the world, while sustaining American support for international law and democracy.

NETA CRAWFORD: I think the master frame is fear. We focus on threats when we are afraid, and we tend to not pay attention to disconfirming evidence. So the big move, I think, would be to focus our thoughts less on emphasizing, hyping fear and to think more about alternatives which actually would make us less insecure. So the first step is deal with the fact that we’ve got a fearful populace, and the second step is to consistently argue, as I try to do, that the current policies are ineffective, counterproductive, and wrong. It’s that simple. And we can show how they are and then offer more effective, productive, and morally based policies.

CARMEN RUSSELL: The six panelists went on to analyze the failure of American policy in the Middle East, a topic which took up most of the discussion. They all agreed that the U.S. was not served well by its perpetual intervention in the region and consistent allegiances to Saudi Arabia and Israel.

TRITA PARSI: What is more difficult is to be able to point to a positive example of our own, a case in which we almost went to war but we managed to avoid it because we invested in multilateral diplomacy, we collaborated with our allies, we went for a compromise instead of just pushing for the other side to submit and capitulate, and we essentially chose wisdom and dialogue over militarism and coercion. There is such an example, it’s the Iran nuclear deal. It is an amazing achievement, but I fear that we have done far too little in elevating that as the progressive counterexample to Iraq.

TRITA PARSI: Why is it that it’s so difficult for us to be able to actually play that role of trying to find a good balance there? Well, number one, we don’t have relations with Iran. This is completely hampering our ability to be able to play that diplomatic role to actually stabilize the region rather than just pushing more weapons into the region. And secondly, because we have taken the Saudi-U.S. relationship to a level that is really difficult to justify.

ROBERT MALLEY: My view is not you cut off Saudi Arabia, but you need to be much tougher with them in terms of when they are dragging us or when they’re dragging the region in ways that we think are detrimental to our interests. The war in Yemen is exhibit A, B, and C, but we should never have allowed ourselves to have enabled that operation, to have been any way complicit in it.

NETA CRAWFORD: I think the worst case scenario which everyone, I think, has feared for decades, is that some power would dominate the Persian Gulf and maybe block the Strait of Hormuz. That’s the giant fear. But the United States is much less dependent, in fact the world is much less dependent, on this oil. China is more dependent on Persian Gulf oil than the U.S. and most of the European countries.

PETER BEINART: Why are we giving three plus billion dollars to with no strings attached to an Israeli government that that is overseeing this level of human rights abuse? I think the minute that question gets posed on in a Democratic presidential campaign the debate changes because there is no good answer for that question.

CARMEN RUSSELL: The discussion also touched on relations with China and Russia, with speakers expressing grave concern that the current trend is likely to lead to a new Cold War, or even a hot one, rather than focusing on issues that actually threaten the country such as climate change.

KATRINA VANDEN HEUVEL: The national security strategy demotes the global war on terror, which should never have been a war, and elevates China and Russia as our greatest threats. How do you reduce defense budgets if you are now virtually in a virtual war with two great powers and you’re driving them together, which has its own costs and consequences?

ANDREW BACEVICH: Certainly, China poses the great geopolitical challenge of the 21st century. The response to that challenge cannot be war, it must be an effort to devise a new balance of power.

SPEAKER: The need is more urgent than aggressive potential loss of U.S. currency. War with China or North Korea is possible, global warming is certain. The Pentagon should stop making the situation we fear, the worst case scenario, more likely.

CARMEN RUSSELL: The panel concluded with the unanimous belief that the U.S. could play the role of moral leader when it comes to human rights, global warming, and peace efforts, but that the current framework continues to promote geopolitical thinking.

ROBERT MALLEY: We are really not in a fantastic position to really criticize others. That’s not to say that others don’t deserve criticism, and China, I think, certainly does. But the true leadership that I think progressive foreign policy would aim at would be to make sure that we are a source of emulation, that other countries look at us and they want to copy what we’re doing because we’re doing it so well, we’re living up to our values.

KATRINA VANDEN HEUVEL: What’s not helpful, and this speaks to demilitarizing our mindset, demilitarizing our discussions, is almost every night, and I’m talking to MSNBC and CNN, not Fox, you have a passel of former intel security chiefs, FBI, coming across the screen. So I think we need a much wider representation of the full range of voices in this country. And we may not find it on cable, but we should make sure, as people in this line of work, in the media, to make sure that happens. Because that’s a first step in defining a different reality, one less militarized than happens too often.

Katrina vanden Heuvel is The Nation’s editor and publisher. She is the co-editor of Taking Back America–And Taking Down The Radical Right and, most recently, editor of The Dictionary of Republicanisms. She is also co-editor (with Stephen F. Cohen) of Voices of Glasnost: Interviews with Gorbachev’s Reformers and editor of The Nation: 1865-1990, and the…

Andrew Bacevich is a professor of history and international relations at Boston University. He is a retired colonel and Vietnam War veteran and the author of many books including American Empire: The Realities and Consequences of US Diplomacy (2002), The New American Militarism: How Americans are Seduced by War (2005), The Limits of Power: The…

Europeans Bowing to Trump on Iran Sanctions, Despite Their Opposition

Charting a Progressive Foreign Policy for the Trump Era and Beyond

US Dept of Defense Failed Audit While Spending $5.9 Trillion Since 9/11

As Campaign to End US-Saudi War on Yemen Grows, Republicans Derail it with Bizarre Wolves Bill