A Booming Stock Market Does Not Mean a Strong US Economy

During his State of the Union speech, Trump touted the recent stock market boom as proof of how well the U.S. is doing. However, as economist Bill Black explains, the boom has nothing to do with new investment

During his State of the Union speech, Trump touted the recent stock market boom as proof of how well the U.S. is doing. However, as economist Bill Black explains, the boom has nothing to do with new investment 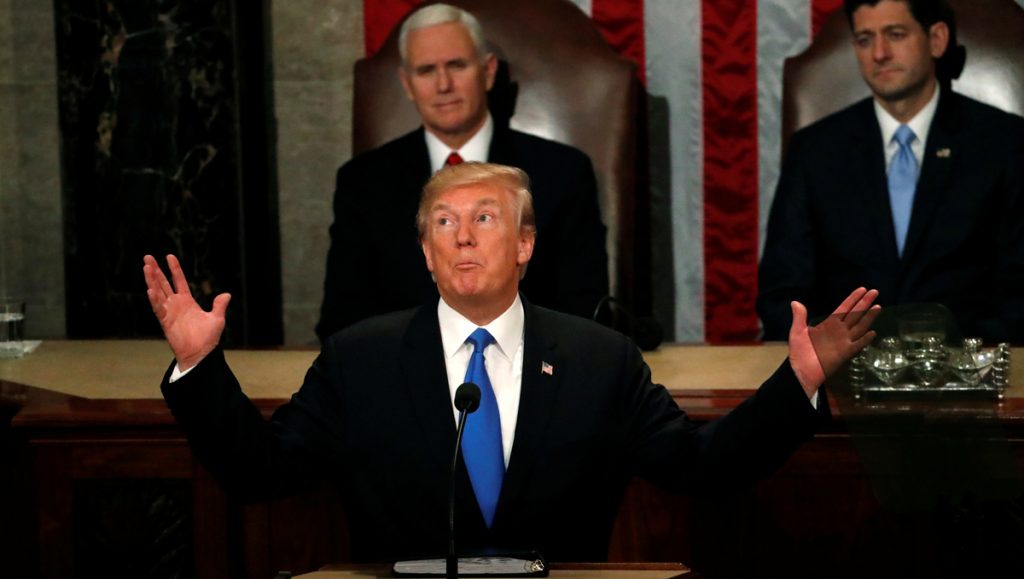 SHARMINI PERIES: It’s The Real News Network. I’m Sharmini Peries coming to you from Baltimore. During Tuesday’s State of the Union speech, President Trump once again touted how much the stock market has risen since he took office. Here’s what he said, more specifically.

DONALD TRUMP: The stock market has smashed one record after another, gaining $8 trillion and more in value in just this short period of time. The great news for Americans, 401(k), retirement, pension and college savings accounts have gone through the roof. And just as I promised the American people from this podium 11 months ago, we enacted the biggest tax cuts and reforms in American history.

SHARMINI PERIES: Does Trump really deserve credit for this booming stock market? Second, what does this rapid rise mean? Joining me now to discuss these questions and much more about the State of the Union is Bill Black. Bill is a white-collar criminologist, Associate Professor of Economics and Law at the University of Missouri- Kansas City. He is the author of The Best Way to Rob a Bank is to Own One and he is also our favored guest here on The Real News Network. Thanks so much for joining us, Bill.

SHARMINI PERIES: Bill, give us a sense of what you thought about that particular clip and what questions remain in terms of his responsibility for the booming stock market.

BILL BLACK: Let’s talk about what stock markets are all about. This is a big secondary market. When we buy and sell shares on the New York Stock Exchange or any of these exchanges, no money actually goes to the company. It doesn’t get new capital to invest. That’s the whole purpose, of course, of what we call the real economy, to make productive investments, hire people, make the world better in those kinds of ways. That doesn’t happen because of stock market prices. That only happens, in the sense of getting capital to new businesses, when you do what’s called an initial public offering, an IPO. The secondary market just makes a really broad market so that people are willing to buy stock because otherwise they get stuck with it. If you own stock in a company that only has five shareholders, lots of luck trying to sell it at anything other than an enormous discount.

So, the stock market has only a very limited connection with the real economy, and that’s particularly true now, and by now I mean actually the last 15 years or so because corporations and banks in particular are sitting on vast amounts of cash that they don’t know what to do with. They don’t think there are productive investments, or at least, in their weird perverse incentives, they don’t think that the really productive investments, like research and development, that only pay off in 5 to 10 years, are good for them because their bonuses are tied to very short-term earnings. So, none of this stock market stuff means a whole lot in terms of folks getting capital because they’re already sitting on cash. If they wanted to build a new plant or invest in new research on anti-cancer medicines, they could do it out of their own funds or they could go easily to a bank instead of the stock markets.

SHARMINI PERIES: Bill, he also did talk about people’s 401(k)s and said this boom has a positive effect on the 401(k)s. Does it, and if it does, how does it compare with what this boom means in terms of people on Wall Street gaining from all of this?

BILL BLACK: Right. So, the key thing you need to know about these stock markets is that they are overwhelmingly owned by the people of extreme wealth. There was a time, during the dotcom boom, when lots of regular middle-class Americans invested in the stock market. This is a time when you went into … this is back in 1998 type of thing. You went into a men’s barbershop and instead of the sports game being on the television, they would have one of these stupid money programs. Invest your money in this stock. This was a secret, and we should follow their advice, and nobody else will know other than the two million other people that are listening, type of thing.

Lots of people got in the stock market, and you know what? They did really well. Their 401(k)s and their stock holdings were doing gangbusters right up until the collapse of the dotcom bubble. Remember, this is a long time ago, so those numbers were worth more than today’s dollars. There was a 7 trillion, with a T, that’s each trillion is a thousand billions, a 7 trillion dollar loss in market capitalization. Regular people realized that these markets are often the subject of fraud, especially because shortly after the dotcom bubble happened the Enron era frauds happened. Enron goes down in 2001. WorldCom and all these others go down in 2002.

Regular Americans withdrew from the stock market nearly two decades ago, and here’s the key answer, they haven’t gone back. All this stock market appreciation, yeah, a little bit of it goes to middle-class people in 401(k)s but overwhelmingly it goes to the absolute wealthiest people.

And on top of that, what really triggered this super-frenzy in terms of the stock market is the huge tax cuts for the wealthy because what do wealthy people, not 400,000 dollars but say you have 600 million dollars in wealth and you get through the tax cuts another 50 million dollars in wealth? You’ve already bought everything you can buy. What do you do with it? You put virtually all of it in the stock market and everybody like you does the same thing. Collectively, you folks, out of that roughly trillion and a half in stock benefits, over 1 trillion dollars of that is going to go to the absolute wealthiest Americans. They’re going to buy more stock. It’s supply and demand. What happens if a bunch of super wealthy people try to buy a whole lot more stock at roughly the same time? The price of stock is going to go up. Is that going to be good for the super wealthy? Of course. It’s going to be massively good.

That’s why not just under Trump but under President Obama as well, there’s been this record expansion of the stock market. Trump super-charged it for the wealthy by giving money to the wealthy. He redistributed from middle class Americans through his tax bill to the absolute wealthiest Americans. That first stage took record income inequality and pushed it to unprecedented levels. Then this next stage of the stock market rise is going to make the inequality all that much greater.

It’s also going to fuel bubbles. It’s when those bubbles burst that you get the tremendous losses that I described. Those tremendous losses also produce deep recessions. Who loses their jobs in the deep recessions? That again is going to be working class and middle class people. Who gets really wealthy off of these things? They suffer an initial loss when the stock market declines but it comes roaring back because we bail out the wealthiest people, and the wealthiest bankers, and the wealthiest banks. They know over the longer term, this boom and bust schedule with these bubbles is a spectacularly good strategy for the wealthy. It’s just terrible for the rest of us.

SHARMINI PERIES: All right, Bill. I thank you so much for joining us today, and look forward to your report next week. Take care of that cough.