Our best stories for 2007: Environment 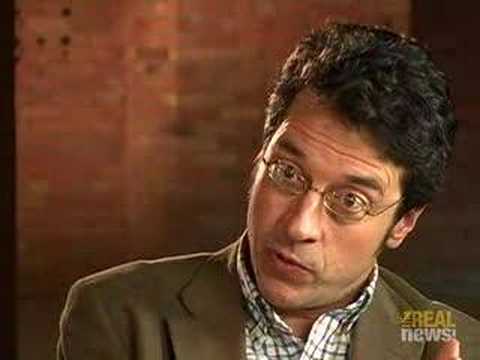 PAUL JAY, SENIOR EDITOR: Talk about the eight or nine practical proposals you make in the book.

GEORGE MONBIOT, AUTHOR: Okay. So what I’ve done is to look at every major economic sector, and to say within that sector how are we going to achieve that 90 percent cut? So in housing for example, two fundamental approaches. The first is a massive investment in energy efficiency, the sort of thing that the German government is doing at the moment. Every year, it’s taking 5 percent of the homes built before 1978 and turning them into incredibly energy efficient homes.

JAY: So who pays for that?

MONBIOT: The German government. This is a government-sponsored [crosstalk]

JAY: So this is also an issue of taxation, then.

MONBIOT: It’s an issue of either new taxation or the redeployment of resources. In the UK, for example, we’re currently on the verge of committing to spending ï¿½76 billionï¿½C$150 billionï¿½on a new nuclear missile system. No one knows why we need a new nuclear missile systemï¿½that has not been explained to us. If we spent that money instead on a new energy system, problem solved. And anyone can see why that money needs to be spent in a new energy system, but somehow the money’s always available for terminating life and never available for preserving life. This is the central mystery of the modern state.

MONBIOT: I don’t believe anymore that we’re going to see a new Chernobyl. I really don’t. And I don’t think that’s going to happen with the new generation of nuclear power stations. And I think that many of the arguments against nuclear no longer apply. But among the other things I’d like to see in the world is the eventual end of nuclear weapons, like almost everyone would like to see a world without nuclear weapons. Having seen what’s happened since the non-proliferation treaty was signed in 1968, in which every nation which has become or has sought to become a nuclear power, to acquire nuclear weapons, has done so by diverting materials from their civil nuclear program. I see that a world without nuclear weapons is impossible unless you have a world without nuclear power. That’s why I come out against nuclear. Yes, this system of new electricity generation and, more importantly, new heat generation, because we use far more heat in our homes than electricity, and that means a big investment in making use of biomass. In Canada you’ve got quite a lot. But it also meansï¿½and this is a slightly wacky ideaï¿½a hydrogen pipeline network, piping hydrogen into people’s homes to burn in their furnaces. It’s as safe as natural gas, strangely, but it can be produced with very, very few carbon emissions. Then, in transport, a revolution in surface transport and the way that we go around. For a start, I’d like to see a lot of our private car use replaced by a far swifter, more efficient, more sensible public transport network. And that would revolveï¿½here’s the bad newsï¿½around the bus. Now, we hate buses. Buses are dismal and humiliating ways of getting around, and very slow and cumbersome. But that’s because the system is crazy. The system doesn’t work. The bus stations are in the city centers. It’s crazy. It’s a hangover from the days in which they were pulled by horses and were probably faster. The second is that the buses don’t have dedicated lanes on the highways. If you close down the city center bus stations, move them out to the junctions of the highways, extend your urban public transport networks out to meet them, you revitalize those urban public transport networks because they serve the suburbs much more regularly than before, and you ensure that the buses don’t have to go in and out of the cities, therefore slowing themselves down. They have priority at the intersections, and they’re faster than the private car, while only producing 10 percent of the carbon emissions per passenger kilometer.

JAY: Would you ban the oil-burning combustion engine?

MONBIOT: I could do that only if we have another system with which to replace it, and I think that such a system might be available. It is as follows: We know that the electric car works, but we know that the problem with the electric car is its limited range, that after 100 or 200 miles, the battery runs down, and then you have to plug it in and wait for hours before it recharges. What if you don’t own the battery? What if you lease that battery from a network of filling stations, and as it begins to run down you pull in to the filling station and open up the bonnet, crane comes over, lifts up the old battery, lifts in a new one and you’re off? No more time than it takes to fill up your tank with gasoline.

JAY: It’s a great idea. And it would involve an enormous political battle with the oil industry. How is that battle waged and how is it won?

MONBIOT: That battle comes down to us. This really is a matter of the people versus the oil companies. There’s a lot more of us than there are of them, though they’ve got a great deal of power, particularly over the political process. But we have to turn carbon emissions into the overriding political issue. We have to put this right at the top of the political agenda and keep it there, because otherwise we have on our consciences the future probable deaths of hundreds of millions of people.