Monbiot on the media and global warming

And ... "Does corporate ownership of the media affect how journalists report the issue?"

And ... "Does corporate ownership of the media affect how journalists report the issue?" 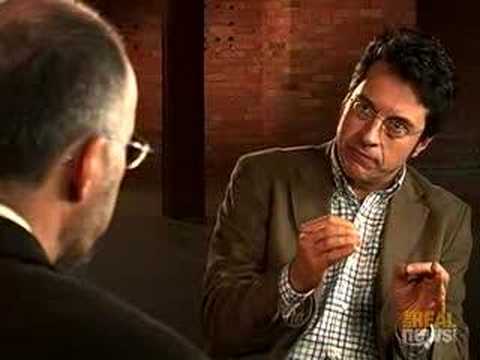 PAUL JAY, SENIOR EDITOR: I mean, we know that still 80 percent of people get their news and information from television. And what role does American TV play in this?

JAY: There’s direct censorship, there’s intervention, there’s pressure on media. How much do you blame this in terms of Americans not feeling this sense of urgency?

JAY: I think that’s too general. It’s easy. But I think it’s more the kind of self-censorship that goes in the heads of journalists. It’s partly what’s good for my career and what isn’t, and that’s situated in the environment you’re talking about.

MONBIOT: Yeah. Precisely. I’m not saying that the proprietor comes along and says, ï¿½Thou shalt take the following line.ï¿½ That’s not how it works. Journalists by and large are intelligent people. They know where their interests lie. They know that if they take a particular line, they get on in their work, and if they don’t, they don’t get on.

JAY: And in terms of ordinary journalists and others working in big media organizations, I don’t think even today people getï¿½. Like, there’s been such an organized campaign to throw pressure on the fact whether human activity even causes global warming, never mind even getting to the debate of how urgent it is.

MONBIOT: Do you have a science degree?

MONBIOT: I’m not singling you out. I went to a meeting of senior television journalists about a year ago. A hundred and fifty of us there. And the chairman of the meeting says, ï¿½How many people here have got a science degree?ï¿½ And three of us put our hands up. This is a big part of the problem, that the people who run the media generally have a humanities background, and they have very little idea not of what science says, because none of us can be expected to have a broad idea of what science saysï¿½it’s moving and shifting all the time, it’s very, very complexï¿½but of what science is. And journalists have enormous trouble distinguishing between those reputable scientists like James Hansen, who you mentioned, and these Exxon-sponsored mountebanks who are basically just working for a public relations agency in coming up with a whole lot of totally meaningless figures without any research behind them, any publications in peer-reviewed scientific journals, saying it’s not happening. And journalists have been bamboozled by this because of their lack of expertise in knowing what science is.