Reinventing 420 in the Age of Coronavirus 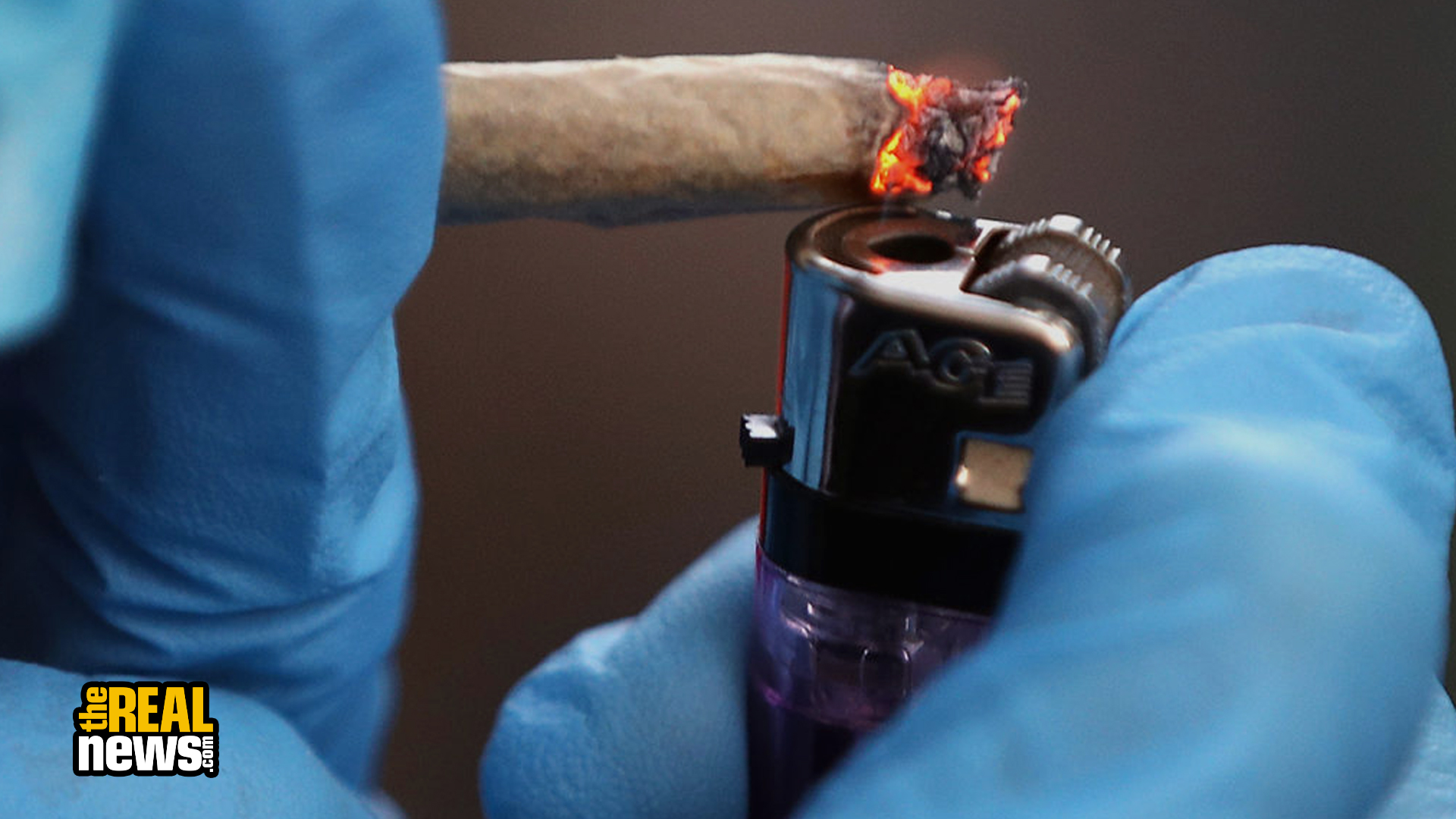 BROOKLYN, NEW YORK - APRIL 14: A recreational marijuana smoker indulges in smoking weed on April 14, 2020 in the Bushwick section of the Brooklyn borough of New York City. As some smokers turn to smoking weed to ease their stress during the coronavirus pandemic, some doctors are warning that cannabis can cause airway inflammation that could cause complications should a user become a victim of COVID-19. (Photo by Bruce Bennett/Getty Images)

April 20, the semi-official day of celebration for cannabis is here. The tradition of “420,” which started in the early ‘70s as a group of Bay Area high schoolers meeting at 4:20 PM to get high,  is now celebrated annually and internationally on April 20, and has evolved over the past half century into part day of protest against drug prohibition and part carnival of cannabis capitalism and consumption.

But the COVID-19 pandemic and resulting lock-downs have cancelled most 420 events across the country and though cannabis is deemed “essential” in most states where it is legal and thus remains available for purchase, state governments, medical experts, and even activist organizations like NORML all issued “stay home this 4/20” directives, imploring cannabis enthusiasts to prioritize public health over consumerism and recreation. And for good reason: mass public gatherings significantly increase the risk of infection and excessive cannabis smoking compromises one’s ability to fight the respiratory symptoms of the virus.

The ongoing pandemic and resulting cancelation of 420 presents an opportunity to reinvent the high holiday of cannabis, and perhaps even the cannabis movement. As coronavirus affects us all but infects and kills black and brown Americans and prisoners at disproportionately higher rates, now is the time to stop and reflect on the history of the 420 tradition and to reinvent its meaning and practice both during the pandemic and moving forward. Rather than privileging the interests of Big Bud over public health and social justice, the tradition of 420 should be rerooted in ethical consumption and equity.

Like St. Patrick’s Day and Columbus Day, 420 was invented in a particular time and place for a particular purpose and then, over time, evolved to take on new forms and meanings for new people in response to new realities and it’s time for it to evolve again. Historian Eric Hobsbawm famously labeled this process the “invention of tradition” and argued that it most often occurs in history during periods of rapid change and crisis in society that upend socio-cultural norms, launching people and communities into a search for new meaning and order.

Take for example Columbus Day. First ritualized in the U.S. during the late 1800s, the public celebration of Columbus’s “discovery of America” originated in efforts by Catholic immigrants from Ireland and Italy to gain equal status as U.S. citizens. To overcome nativist prejudice, Catholic immigrants in cities across the nation organized into mutual-aid associations, such as the Knights of Columbus, and sponsored annual celebrations on October 12—the day in 1492 on which Columbus actually landed in the Bahamas—in honor of the Catholic explorer from Genoa and so-called “founder of America.”

Into the 20th century, the tradition gained adherents beyond immigrant communities, and especially among (white elite) Americans looking to justify the nation’s rapid industrial and imperial growth. From the World’s Columbian Exposition in Chicago in 1893 to FDR’s official designation of Columbus Day as a national holiday in 1934, the tradition quickly became a symbolic shorthand for American power and exceptionalism. As FDR put it in 1940, Columbus Day represented an annual celebration of the nation’s role in leading “the march of human progress” let loose by “the courage, faith, and vision of this Genoese navigator.”

But starting in the late 1970s, indigenous Americans began to call for the reinvention of Columbus Day to historically account for the hundreds of thousands of lives and acres lost to European and then American imperialism over the previous five centuries. Part and parcel of the Rights Revolution(s) of the ’50s and ’60s, the Indigenous Peoples’ Movement worked to upend socio-cultural norms of equality in the U.S. and to reclaim the history whitewashed and silenced by a century of Columbus Day celebrations. In 1989, South Dakota became the first state to officially sanction the annual celebration of Indigenous Peoples’ Day on the second Monday of October. Today, 12 states include the holiday on their official calendars, and public celebrations of indigenous peoples’ heritage take place every October in over 50 different cities and towns across the U.S.

Much like Columbus Day, the tradition of 420 has been reinvented several times since its first inception in the early 1970s.

Like Columbus Day, the 420 tradition only became historically significant once it took on new forms and meanings for more and more people. The first real invention of 420 thus came in the late ’70s, when the inside joke between friends in Marin County spread to American popular culture via the Grateful Dead and connected it to a larger subculture. Several of the Waldos—as the teenagers who met weekly at 4:20 called themselves—had personal connections to the Dead; one of their brothers worked as a roadie for the band, while another’s father managed the band’s finances. Spread from California across the globe via Dead tours and music festivals, the term “420,” as well as the ritual of smoking weed at 4:20 PM, came by the late ‘80s to occupy a central position within the cannabis counter-culture symbology of the “Dead Head” scene.

The tradition’s second reinvention took place during the ’90s, when cannabis activists in the U.S. began staging public protests and “smoke-ins” against drug prohibition annually on April 20. One the first of these public smoke-ins took place in April of 1991 in California.

Story goes that a reporter for High Times, while attending a Grateful Dead concert at the Oakland Coliseum on 31 December 1990 came across a flyer announcing a meet up in Marin County “at 4:20 on 4/20 for 420-ing.” The flyer correctly cited San Rafael as the tradition’s birthplace. But it also contended—and erroneously it turns out—that the term originated as a code for cannabis crimes used by local police.

This reinvention of the term “420,” however incorrect, made April 20 for cannabis activists, both an act of civil disobedience and a symbol of protest against the drug’s prohibition in the U.S.

During the past two decades, as the contentious cannabis politics of the ‘90s gave way to a new era of medicalization and legalization, the tradition of 420 once again was reinvented to address new and increasingly corporate concerns. Especially in states where cannabis has been legalized, 420 celebrations—once staged illegally with the intention of provoking mass arrests—have morphed into government-sanctioned and corporate-sponsored carnivals of consumption, reinvented by Big Bud and tailored to a predominantly white and privileged clientele. Thus what started as a group of friends getting high after school transformed fifty years on into a messy mélange of St. Patrick’s Day and Black Friday for cannabis consumers and corporations.

Beneath the mass consumerism and corporate veneer of today’s 420, however, cannabis legalization remains a social and racial justice issue. As cannabis producers and retailers, and governments in 33 states make billions of dollars in revenue from legal cannabis sales, black and brown Americans remain disproportionately imprisoned for cannabis crimes and burdened by cannabis-related criminal records. Undocumented immigrants continue to face the constant threat of deportation for simple cannabis posession, and even in states where the drug is fully legal.

And as a report released Friday by the ACLU concludes, things are only getting worse. Their study shows that black Americans have continued to suffer unjust policing and disproportionate arrests for cannabis related crimes, and particularly public consumption violations, in the age of legalization. Their research shows that since 2016 black Americans are on average 3.6 times more likely to be arrested for cannabis crimes than white Americans. Thus, as the report concludes, “legalization is not enough.”

The cancellation of 420 this year provides an opportunity to reinvent the tradition to do more for those left out of legalization.The disproportionate impact of coronavirus on black and brown communities in the U.S. coupled with the alarming rates of infection inside America’s prisons bluntly remind us that the Rights Revolutions of the 20th century are far from complete. To mindlessly or recklessly celebrate cannabis consumption or bemoan its temporary proscription is to ignore and further silence the continued suffering of the many casualties of America’s unjust War on Drugs, a suffering now further compounded by the pandemic.

But as history teaches us, if we want to change the meaning and practice of 420 and for the better, we must take advantage of this time of forced isolation and reflection to reinvent the tradition so as not to whitewash or silence those excluded from the celebrations. To their credit, several cannabis nonprofits and corporations recently teamed up to sponsor an online event called the Highstream 420 Festival, with a percentage of proceeds going to covid-19 relief funds and the social justice work of cannabis non-profits, including the Drug Policy Alliance.

So, take time this 420 to prioritize health and justice over pleasure and privilege. Stay home. Celebrate responsibly. And for every dollar you spend on cannabis for the holiday consider donating a dollar to one of the important social justice causes linked below.

David A. Guba Jr is Assistant Professor of History at Bard Early College in Baltimore City, and is the author of Taming Cannabis: Drugs and Empire in Nineteenth Century France.