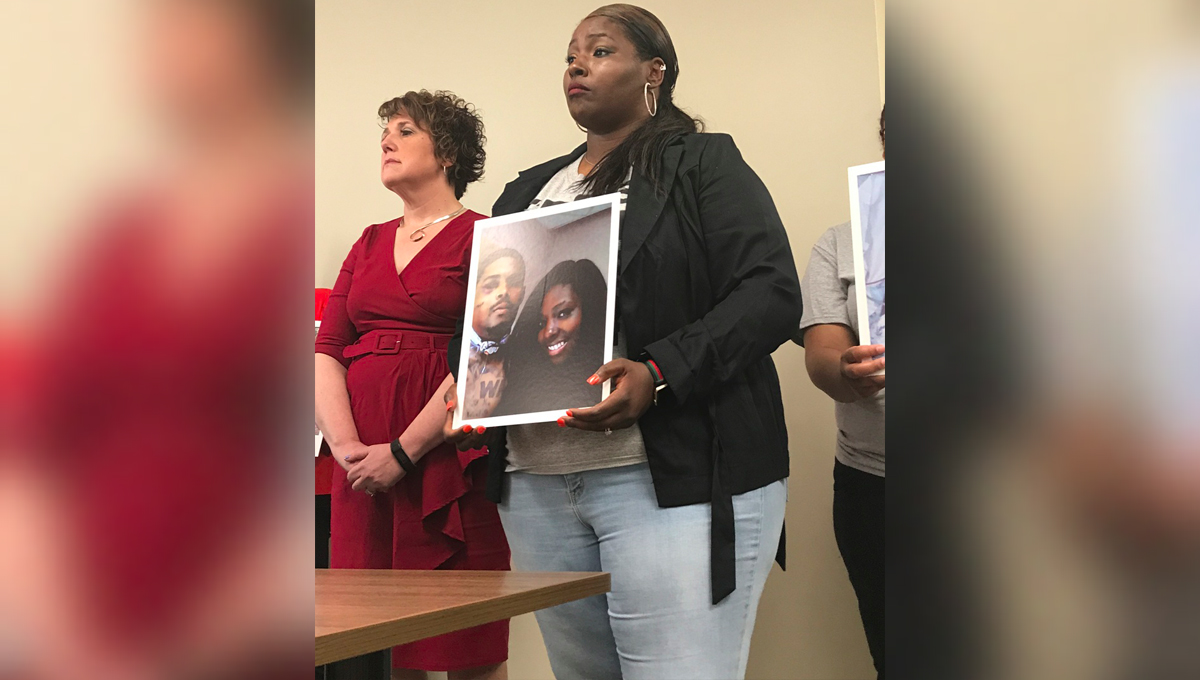 Not long after Judge Althea Handy declared a mistrial in the Keith Davis Jr. trial Thursday, the whole thing started all over again.

Davis’ lawyer Natalie Finegar was back in a courtroom in order to schedule the next court date for her client for what would now be his fourth trial for the same crime. Homicide victim Kevin Jones’ family came out of the courthouse dazed, and Davis’ wife Kelly and other activists gathered nearby stunned, low-key furious, and wondering what happens next for a man they’ve long said did not shoot Jones 11 times near Pimlico Race Track in 2015.

Davis’ fourth trial is set for November 5, 2018 though a lot could change by then. The State’s Attorney’s Office has not committed to even trying Davis again for Jones’ murder (“We are committed to obtaining justice for the victim in this case so we will re-assess and make a determination about the next steps soon,” the SAO’s statement read) and Finegar intends to motion to dismiss the trial altogether.

She would have good reason to try: Davis’ third murder trial was shaken-up by the trial-severing revelation of a security camera video in possession of the state and never given to Finegar that shows Jones minutes before he was murdered, followed by a man who does not look much like Davis, seemingly pulling a bandana up around his face.

“[The video] should have been delivered to the defense on a silver platter with a big red flag saying, ‘You should take a look at this,’” Finegar said last week not long after she first found out about the video. “Quite frankly, I think it probably should have led to the dismissal of this case—or him never being charged in the first place.”

When the hung jury exited the courtroom yesterday afternoon after Judge Althea Handy declared a mistrial, they nearly galloped, giddy that they were off the hook for deciding Davis’ fate. The case  is loaded. It as much about about how homicides are investigated in Baltimore and how Marilyn Mosby’s State’s Attorney’s Office operates as it is about Jones and Davis.

What has become a high-profile murder trial with major implications for public trust began as the first police shooting in Baltimore following the death in police custody of Freddie Gray. On June 7, 2015, Davis was chased by police who believed he had just tried to rob an off-the-books cab driver or “hack,” and claimed he aimed a gun at them. Police shot at Davis 43 times, hitting him three times. Davis was arrested, hospitalized, and hit with a series of gun possession charges. He went to trial in early 2016 (violating the 180-day right to a speedy trial) and was found guilty of possession of a handgun, though not guilty on 15 related charges.

Days after the conviction, the State’s Attorney’s Office announced that the gun Davis had was tied to the murder of Jones, who was shot earlier that morning in the same Park Heights area. Davis was charged with second-degree murder. Along with the murder weapon cell phone records place Davis near the scene of the shooting. Davis’ first trial, in late 2016, was a mistrial. The second trial in early 2017 yielded a guilty verdict but in late 2017 Judge Lynn Stewart Mays granted Davis a new trial because, she said the SAO “sanitized” the criminal record of David Gutierrez, an inmate who claimed Davis confessed to Jones’ murder as the two got drunk on prison wine together.

In the months leading up to Davis’ third trial, the Civilian Review Board found the four officers who chased Davis and shot him hours after Jones’ murder guilty of “excessive force” and their account of events contradictory and unreliable. It was recommended that two of the cops be fired and the other two suspended.

Davis has long maintained his innocence and he has been backed by his wife Kelly Davis and local activists involved with Baltimore Bloc who have accused the embattled Baltimore Police and Marilyn Mosby’s State’s Attorney’s Office for going after the wrong man, maliciously, because he was shot by police and survived. A three-year old video in possession of the SAO that offered up a new suspect that was not given over to the defense certainly helps their argument.

The evasive testimony of a homicide detective in the third trial probably helped too.

Now though, Veney saw the video differently. Finegar asked when Veney changed his mind and he said he had felt that it had no value, “up until Friday.” He did not offer any further information, would not comment on the video as a homicide detective and maintained eye contact with the jury whenever he answered from the stand.

“I have an opinion that [the video] is worthy of playing to the jury,” said Veney, in a bow tie, tilting his head towards the jury.

Veney told Finegar that he didn’t take any notes when he watched the video years ago but maintained he had watched it. As for why he didn’t take notes—“The video speaks for itself,” he said, more than once. Veney did ultimately observe that in the video he could see a man trailing Jones and seemingly placing a mask over his face. He didn’t speculate on who the man in the video was.

Assistant State’s Attorney Andrea Mason, who on Friday had claimed the video has been in the hands of the defense for years, pivoted once Judge Handey chastised her for never getting it to the defense. Then she incorporated the video into her argument. She said the man in the video was Keith Davis, not a new suspect. It was further evidence Davis killed Kevin Jones. Mason did not explain why in the previous trials she never introduced the video she now claimed showed Davis, mask up, trailing Jones moments before the murder.

Later, Mason brought out the clothes Davis wore when he was shot by police: ripped jeans and black and white sneakers. Mason said they matched the clothing in the video, though Finegar stressed that Davis was wearing a white t-shirt when he was arrested and the man in the video wears a black t-shirt, ripped jeans, and white sneakers. Davis’ white t-shirt was never logged into evidence control by the police. It is gone.

Meanwhile, Lane Eskins, one of the two officers that the Civilian Review Board suggested firing, was one of only two of the officers involved in Davis’ shooting who testified; the other cops weren’t even called to the stand. And David Gutierrez, the inmate who said Davis confessed to Jones’ murder returned. Finegar pressed Gutierrez on why he moved from prison to prison so much and highlighted another trial he had recently testified in, suggesting he is a professional snitch. Then Finegar brought Ihtisham Butt, who is in jail for sexually assaulting a 14 year-old girl and was Gutierrez’s former cellmate who claimed that he never encountered Davis until after Gutierrez left Jessup and said it was “impossible” to move between cells the way Gutierrez claimed. The SAO brought up Michael Byer who is currently investigating prison corruption and contraband and testified that most of the rules of prison are not followed. The implication is outrageous, another sign of a justice system gone feral with little accountability: Prisons are so corrupt and out of control that you can’t disprove anything anybody says about what goes on inside.

In court, Finegar called the police investigation into Jones’ murder “absolutely appalling” and said that no suspect other than Davis had ever been pursued. The SAO, she added, was both “reckless” and “relentless” in prosecuting Davis for a murder he did not commit. The video and Veney’s shaky testimony showed that another suspect was likely ignored and additional witnesses were not interviewed.

There are pretty much two prevailing theories as to how the highly-contested morning of June 7, 2015 played out. Either Keith Davis shot and killed Kevin Jones early in the morning and remained within a mile of the shooting for five hours, kept the murder weapon with him, tried to rob a hack with it and pointed it at police. Or investigatory incompetence and malfeasance morphed into a 4-Dimensional chess-like cover-up by BPD resulting in a planted gun from a nearby homicide on an innocent man. But regardless of where you fall, this third trial revealed an investigation that is at best inept and at worst, corrupt.

“The question I still have in my mind is why this case wasn’t dismissed. It is unfathomable to me how the State’s Attorney and the detective in this case could have in their possession for three years this video and claim it had absolutely not evidentiary value. And then when it surfaces in the trial and I show what value it can have and how it can be in my client’s favor, then the state decides to use it as a piece of evidence against him,” Finegar said not long after the hung jury. “It’s the worst discovery violation I have seen in 25 years as a criminal defense attorney and I am absolutely dumbfounded as to why we would continue to move forward with this case. This is the second time there has been a discovery violation. It’s time to stop.”