By Dan Roberts and Spencer Ackerman. This article was first published on The Guardian. 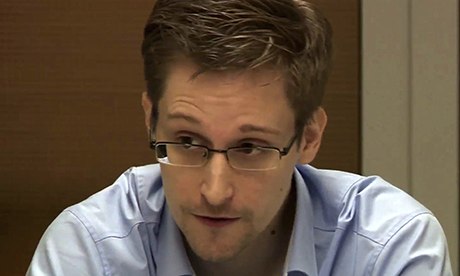 Edward Snowden in Moscow. ‘The the American public deserves a chance to see these issues determined by open court.’ Photograph: Sunshinepress/Getty Images

Edward Snowden, the former security contractor who leaked a trove of National Security Agency documents, welcomed a court ruling on Monday that declared the bulk collection of Americans’ telephone records to be a likely violation of the US constitution.

Snowden said the ruling, by a US district judge, justified his disclosures. “I acted on my belief that the NSA’s mass surveillance programs would not withstand a constitutional challenge, and that the American public deserved a chance to see these issues determined by open courts,” he said in comments released through Glenn Greenwald, the former Guardian journalist who received the documents from Snowden.

“Today, a secret program authorised by a secret court was, when exposed to the light of day, found to violate Americans’ rights. It is the first of many,” said Snowden, whose statement was first reported by the New York Times.

Judge Richard Leon declared that the mass collection of so-called metadata probably violates the fourth amendment, relating to unreasonable searches and seizures, and was “almost Orwellian” in its scope.

He also expressed doubt about the central rationale for the program cited by the NSA: that it is necessary for preventing terrorist attacks. “The government does not cite a single case in which analysis of the NSA’s bulk metadata collection actually stopped an imminent terrorist attack,” wrote Leon, a US district judge in the District of Columbia.

“Given the limited record before me at this point in the litigation – most notably, the utter lack of evidence that a terrorist attack has ever been prevented because searching the NSA database was faster than other investigative tactics – I have serious doubts about the efficacy of the metadata collection program as a means of conducting time-sensitive investigations in cases involving imminent threats of terrorism.”

Leon granted a preliminary injunction sought by plaintiffs Larry Klayman and Charles Strange, concluding that their constitutional challenge was likely to be successful. In what was the only comfort to the NSA in a stinging judgment, he put the ruling on hold, pending an appeal by the government.

Senator Mark Udall, a leading critic of the dragnet collection, welcomed the judgment. “The ruling underscores what I have argued for years: [that] the bulk collection of Americans’ phone records conflicts with Americans’ privacy rights under the US constitution and has failed to make us safer,” said Udall, a Democrat.

Senator Ron Wyden, another NSA critic, also welcomed the ruling. “Judge Leon’s ruling hits the nail on the head. It makes clear that bulk phone records collection is intrusive digital surveillance and not simply inoffensive data collection as some have said.”

He went on: “Significantly, the judge also noted that he had ‘serious doubts about the efficacy of the program.’ The reason that he and many others have these doubts is that the executive branch’s claims about this program’s effectiveness are now crumbling under public scrutiny. Protecting the country from terrorism is obviously vitally important but the government can do this without collecting the phone records of massive numbers of law-abiding men, women and children.”

At the White House, spokesman Jay Carney said he had no comment on the on the case, saying he had not heard of the decision when the press briefing started and referred reporters to the Justice Department for reaction.

“We’ve seen the opinion and are studying it. We believe the program is constitutional as previous judges have found. We have no further comment at this time,” said Justice Department spokesman Andrew Ames.